Jeremy Couillard's gloriously idiosyncratic art is being splashed across 80 synchronised screens in New York throughout October.

The video is derived from Couillard's game Fuzz Dungeon, which was released on Steam in June.

You play as a rat-dog-witch named Flip as she navigates the space where good ideas get lost in search of a Sasquatch sex amulet that will somehow transport her back to her office job. 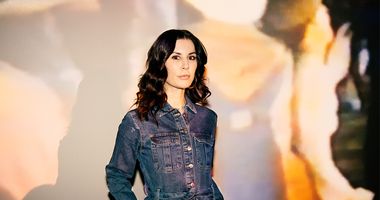 Along the way, she must complete mini-games that critique the absurdity of life under late capitalism. At one point, Flip walks around the Amazon office answering questions from a computer therapist in order to access antidepressants.

'People call my games trippy, but I don't think the people who say that have even smoked weed,' Couillard said. 'I wish I saw shit like that when I was on drugs.'

'Fuzz Dungeon tries to comment on and be an analogy for hyper-consumerism,' he said. 'To put it in those spaces is cool.'

Couillard has exhibited in Times Square before, showing visuals from his previous game, JEF, in an abandoned Sephora store.

Couillard, who taught himself how to make video games, is now the Associate Professor and Program Director of New Media at LaGuardia Community College (CUNY).

The game's atmospheric sound was created by the band Lobby Hotel, who Couillard connected with through painter Amanda Valdez. (Both Couillard and Valdez are represented by New York gallery Denny Dimin, which streamed Fuzz Dungeon in June).

'I was painting a lot of interiors, and how we remember certain spaces and how we construct them in our heads.'

'In some ways Fuzz Dungeon is more of an analogy of video games than a video game. It's about taking a trip through my head.'

The characters in the game draw inspiration from: art history, such as the demon slain in Master of Belmonte's portrait of Saint Michael (1450–1500); media Couillard consumed as a kid, including the Teenage Mutant Ninja Turtles; and programmes such as ZBrush and Mixamo.

'The software wants you to do certain things. Without trying much it just gives you these characters,' he said.

Selecting animations from Mixamo's free online database, Couillard gave Flip a walk that's reminiscent of sex workers in the Grand Theft Auto series, while her idle stance is a woozy sway that suggests stunned fighters in games like Mortal Kombat.

'I wanted her to seem kind of confused. From drunk to sassy to scared,' he said.

The Fuzz Dungeon world is illogical, but Couillard says that's not so different from our own.

Fuzz Spiral's Times Square showing is presented by online art gallery Daata, who are also, inevitably, selling NFTs of Couillard's characters, as well as drawings on paper and other merchandise. —[O]