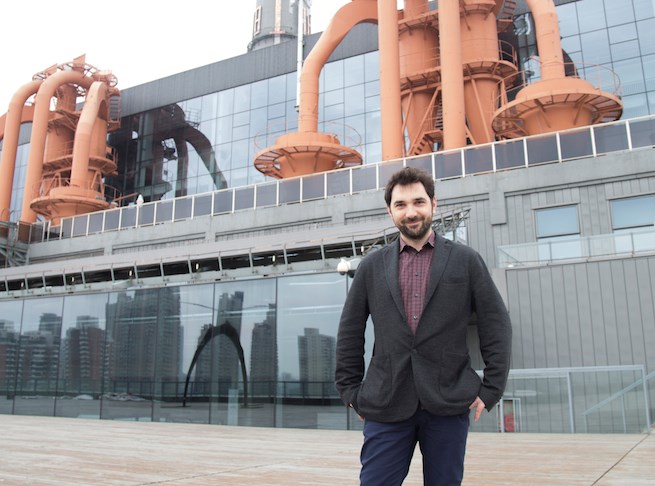 At a talk he gave less than a week before the opening of the Tenth Shanghai Biennale, head curator Anselm Franke asked his audience to add him on WeChat. He wasn’t just looking to make friends. Engaged only six months ago, the event is being prepared by a small team working at chat speed, faster than paper invites or emails could handle.

The shortened lead in to the event has also affected the work Franke has selected for the biennale, entitled “Social Factory”. The exhibits, he says, tilt away from complicated installations towards sound art and videos. The large atrium space, which contained a massive Huang Yongping tower in 2012, will this time be filled with the sound of Peter Ablinger’s robo-piano, which will ‘speak’ before its words dissolve into music.

Use of the robo-piano is the solution of someone who is exacting when he can afford to be, pragmatic when he has to be, but ultimately reluctant to compromise. Asked during the talk how he has changed his approach for Chinese audiences, he says, “I completely refuse to do that. That means scripting the viewer. I like to think of art as a territory of anarchy. You should be as generous as possible with the viewer. You cannot make art an object of consumption. You ruin it in the process. When museums have two years of McKinsey or Price Waterhouse Cooper telling them what to do they’re basically ruined. Anyone working in this field needs the freedom to not be understood.”

Nevertheless, the “Social Factory” theme, which asks how we attempt to produce society and whether we can achieve our ambitions, is a good fit for China, and for Shanghai. There’s no country that has a stronger artistic tradition of social engineering, he argues, with literati painters and poets doubling (or tripling) as bureaucrats, the makers of a society. Fast forwarding to recent decades, Shanghai has been thoroughly retooled with its factories converted or pushed out to create something new. The biennale’s venue, the Power Station of Art, is a case in point.

In 2012 you were the Head Curator of the Taipei Biennial, “Death and Life of Fiction: Modern Monsters”. Magical beliefs seem to be a concern of yours.

I’m always very careful not to affirm magic as magic. I don’t think that we do justice to it when we call it magic. If you manage to shift the way we look at this then you are able to create genuine experiences. If you affirm magic as magic then what you get is the ‘wow’ effect. What I’m trying to do is find angles that are not magical but outside the realm of everyday rationality.

And that raises some interesting questions about why we leave it outside of the everyday and why we still need it and conjure it.

Exactly. And ‘monster’ in that sense in Taipei was mostly about the border between everyday rationality and the effect of what we could call the monsters of modern ideas. When ideas don’t exactly translate into lived realities but rather do harm to lived reality. Taiwanese history is like a burger with many different layers of violent histories.

The People’s Republic of China has its own history of monstrous modern ideas and violence. Did you seek to make connections between the 2012 Taiwan Biennale and “Social Factory”?

I tried to make it quite different. You have certain limitations here that you need to deal with productively. I also felt that the Taiwan Biennale was in Slavoj Žižek terms “tarrying with the negative.” It was playing with the negative forces. The negative means many things — forces of negation can be violence, political movements that negate a certain order, or just that which is not named and has a scary aspect of the unknown. I thought that in Shanghai and China it was more important to have a more affirmative view of modernization just to shift focus.

You mean because people here bring with them a lot of negative scripts about China?

No, I think more because there’s a certain power of remaking society here and I didn’t feel that it was appropriate to be too negative in one’s outlook. But the questions of building society anew also require us to look at aspects other than only say fancy images of the future or projections of how we want to be. That echoes well with what I see as the most advanced artistic practices here. Just to provide some sort of resourcefulness against a very commercial idea of the future China which also has a tendency to be shallow.

That positivity is interesting given what you’ve said about the museum as a training ground for the middle class. Aren’t you skeptical about the ways society is constructed here and their limitations?

I’m not cynical about it. I just think that we need to be more courageous about shaping this process and more courageous about analyzing what the long lasting effects are and what climate we create. My idea was really, can we try to battle cynicism? With really good artists that work here I find a lot of cynicism. Cynicism can be a valid form of expression but one also needs to be careful about poisoning things. If you look at everything as a game you lose some of the productive aspects of it. Things need to be cultivated in order to be good. If they’re not cultivated, people start treating each other like shit.

But there are real constraints on creativity here. Xi Jinping has given explicit guidance to artists and the designers of “weird” architecture, and the State Administration of Radio Film and Television has just issued a new directive against representations of extramarital affairs in films and on TV. You’ve said artists are allowed to be free at the cost of their consequentiality, but here, they’re not necessarily even allowed that freedom, and it would seem to force them towards cynicism or radicalism.

I think the question of what is radical here right now is not quite clear. There’s a lot of shifts. For a long time Chinese contemporary art, at least for those who made it internationally, was about a certain kind of radicalism. You could say performing avant garde gestures of taboo breaking, but we’re definitely past that. Today it may be very radical to strangely affirm old aspects of Chinese society and shift their signifiers. To work in this field I kept this question open in order to be perceptive to contradictory signals.

How new positivism in the arts from officials will play out is going to be one of the most interesting questions because that’s all about the power of signifiers and also about this strange magic that was once part of socialist realism that’s basically an art that lacks a negative dimension.

What is the role museums can and should play in China?

Museums on the one hand can work as instigators of city marketing and whatever but if they’re to work as art museums they have to be part of a contested field where people are engaging in symbolic struggles over meaning. This is possible only if these struggles are reflected. There’s a way in which museums speak the truth. Even if you don’t want them to they always do. The first axiom of communications theory is that human cannot not communicate. If I refuse to talk to you it’s definitely communicating a lot. Art and museums do the same. They always represent a contested field of signification, a representation of who speaks, who doesn’t speak, what version of history, etcetera. The question is whether that will be cultivated or the idea is really marketing culture and city culture which may work for all kinds of museums but not for museums of art.

It would’ve been a perfect exhibit to take the China Art Palace and shrink it down and put it inside the Power Station of Art. It’s such a perfectly constructed representation of what the State wants to be and be seen to be. My favorite work in there is a 5mx2m oil painting of the opening of the Maglev, the fast train that goes to the airport. Celebrating banal infrastructure projects is where physical engineering is hammered into the social engineering of nation building.

That’s part of the sacred modernisation project. But to me it’s as absurd to see in late nineteenth century European collections almost no infrastructure, while it changed people’s lives completely. You see only bourgeois madams. Turner had some, there are exceptions, but it’s a particular cosmological understanding of the role of humans and the role of technology and there’s a blindness to technology and infrastructure that’s covered up in the rhetoric of civilizing. You have to be a really good art historian to find the shock of technology in the faces of modern painting in European museums.

Can you give us an example of a work you’re especially happy to have in the show?

The one that is probably most related to the questions you have raised is Liu Ding’s work “1999” a large installation with 50 telephones which play sounds, excerpts of interviews and music, all from the ’90s, showing the development of contemporary art work in china. It’s an edited selection made to show you how people related to what happened, how they perceived being invited to that show, what they thought of that gallerist, that curator, their own work. It’s a very smart and intelligent way of questioning the foundations - how did we become that which we are now. How stable or unstable is that foundation?

Similar events are taking place from Warsaw to Santiago this month in a global effort to reactivate the art world.

Made with silver and blue polypropylene, the project will be completed and revealed to the public on Saturday 18 September.