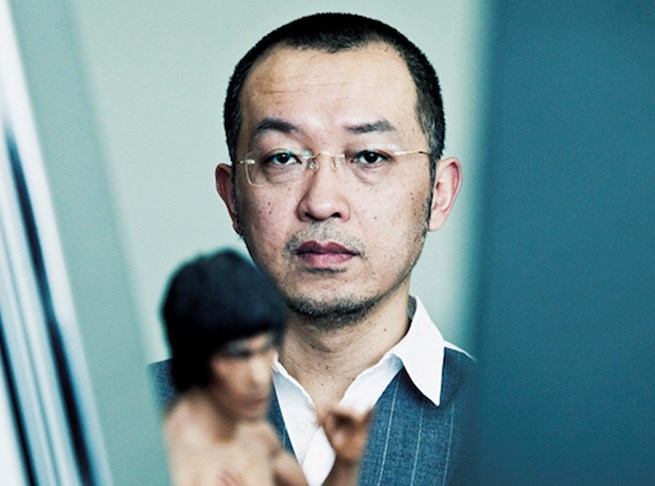 Born in Beijing in 1966, Feng graduated from the printmaking department of the Central Academy of Fine Arts in 1992. Often referred to as China’s ‘Godfather’ of new media art, the artist was one of the first Chinese artists to embrace digital technology, modifying video games to include Chinese elements, and replacing the faces of characters in first person shooter Quake III

with his own. Not surprisingly then, Feng is one of ten new media artists, five French and five Chinese, featured in Metamorphosis of the Virtual 5 + 5, an exhibition curated by David Rosenberg and co-produced by Joanne Kim. The show, which continues until August 31 and takes place in the third floor basement of Shanghai’s K11 Art Mall includes Feng’s Vector Drum (2013), a video of the artist using a Vectrex, a home games console launched in 1982, that has a built-in cathode ray monitor, 1.5Mhz CPU and 1kb of RAM. Feng uses the Vectrex to draw and animate a drummer, creating a work that at once encapsulates developments in his own life and a growing global ambivalence about technological progress. 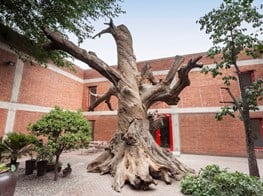 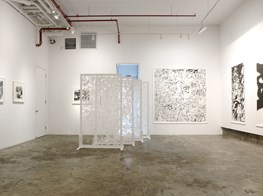 Ocula correspondent, Sam Gaskin, spoke to Feng about Vector Drum (2013), technology, and what future is there left for utopianism.

Where did you get your Vectrex and why did you decide to use it in this work?

I was interested in arcade consoles so I got some Neo Geo SNK game consoles and, at the same time, when I was doing my research online I found this vector video game console. I’d buy consoles on eBay and asked my friends at Chambers gallery to bring me one or two when they visited Beijing. Finally, I have three Vectrex machines. Each one only has one game, so you have to buy the whole console again to use a different game.

Now if you go to eBay or somewhere it’s very difficult to find. This console was only available for two years so only about 10 games were made. The vector graphics are very special, very different from bitmap.

It’s great that the software allows players to create things.

There were only two software releases like that. One is “Art Master”, for drawing and making ten frame animations, and the other one is for composers — you can create drum beats and so on. But everything is there, the technology for the drum beat, the light pen for vector drawing; it’s all the same.

The work shows a simple figure drumming at different speeds. Why did you choose this subject matter?

I’m a drummer now. It’s very natural for me when I make an animation that the idea jumps into my head. I’ve been interested in music since I was very young, and I had my first synthesizer back in 1993, the same day I got my first Macintosh. I’m very interested in and familiar with these music machines. All the soundtracks and music of my previous video game and installation works have music that I made.

I started to play real drums, a drum kit, last year. I founded a band with a friend, Wu Na, the top guqin player in the country. I love guqin music very much so I think maybe I can try to play the western contemporary drum kit with the guqin and see what happens. The result was really exciting for me.

The funny thing is that the drummer doesn’t make any noise but drawing the drummer makes a noise. Every time you make a node the Vectrex emits a beep.

In the beginning I had two kinds of software in my hands, one for animation, one for making drum beats or whatever. In the beginning I wanted to use them both, the music software to create the sound and sync to my animation. But when I started making the animation I noticed that the white noise was really beautiful. It was very much related to my light pen’s location on the screen. So I thought I didn’t need the music software. This is totally enough.

I don’t know if I’m between the old and the new. I’m going to have a lecture in Hong Kong called “Digital Electronic Analogue” that’s more about reverse engineering. But it’s a time to think. It used to be a big dream for us. The Third Wave, the 1980s book [by Alvin Toffler], really influenced me. I was very excited to await the Third Wave — computers, digital products, the nternet, whatever. But now it’s happened I don’t see any greater happiness. I think something’s wrong. Something’s totally wrong. Thinking, emotion, and art cannot be digital. Digital technology didn’t bring anything. It’s fast, convenient, cheap, but that doesn’t really help. That’s why I put more of my attention and time into drumming, calligraphy, painting, things like that. I’m a little bit tired of technology.

I’m kind of a pioneer of digital art — the first one to own a computer and all the toys. But more and more I don’t see it as making me better or people’s lives better. So what’s it for? Real time global communication? Why? Why do we use that? Facebook, taking photos to share any time. Why?

Technology has made great progress but I don’t see how it changed our lives for the better. Really I don’t. I’m not worried about this… but I should say I’m worried. Because my children, when I see them they’re really focused on a touch screen or whatever but it never helps them have more time to think, draw, play. Everything is just for that moment’s fun. —[O] 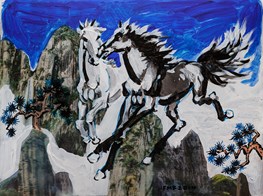 Born in 1966 in Beijing, Feng Mengbo’s childhood was hugely influenced by the Cultural Revolution at its peak in the 1970s. Feng graduated from the Design Department at the Beijing School of Arts and Crafts in 1985, and then went on to

Operating in three spaces across New York and Beijing, for the past two decades Chambers Fine Art has presented a range of contemporary Chinese artistic practices, contributing to the visibility and popularity of avant-garde Chinese art

Chambers Fine Art is a gallery specialising in contemporary Chinese art located in New York and Beijing. It was established by Christophe W. Mao in New York in 2000. Recognising the need for a gallery that would serve as an authoritative source of