Crush at Para Site: What if you couldn’t have it?

Drawn on paper by Oscar Chan Yik Long in gestural black ink strokes, Cupid (2015) greets visitors with a sinister toothy smile as they enter Para Site. The strikingly fearsome figure is positioned on the wall of the gallery's entrance, near one of Chen Dandizi's vertical neon tube lights, part of the series 'Tick Away' (2015), along which a vertical line of text reads: 'What if you couldn't have it?' Both works form part of Crush (15 September–25 November 2018), a group exhibition curated by Qu Chang to explore the unlit underbelly of desire and unrequited love through the work of 17 artists and collectives, including Huang Jingyuan, Lau Wai, Lee Kit, Li Jinghu, Dawn Kim, Sound Route (Musquiqui Chihying, Shen Sum-Sum, Wu Chi-Yu), and Cici Wu.

Having a crush and experiencing unrequited love are entangled in this exhibition. Sarah Lai Cheuk Wah's Sune won't let me touch him (2015), for example, is a 2 minute 22 second video shown on a desktop computer that sits on a simple desk with a reading lamp. We see the artist's hand hover over found videos of guitarist Sune Rose Wagner of Danish indie rock duo The Raveonettes. She can't touch him through the screen yet his body seems to jerk away from her hand all the same, calling to mind the obsessive dimension that a crush can take, while also highlighting the fact that unrequited love—though commonly based in rejection—can also be established in fantasy.

The pathologisation of romantic interests can be seen in Chen Zhe's 891 Dusks: An Encyclopedia of Psychological Experiences (2017), a heavyset leather-bound book with gold embossing that forms the second of six chapters of the artist's decade-long project, Towards Evening: Six Chapters. The artist presents passages from a medical publication titled New Comprehensive Homeopathic Materia Medica of Mind, compiled into a reference book that categorises and conceptualises 'disquiet' through hundreds of 'psycho-poetic' entries. The volume is shown in a black box with a golden, glowing interior.

Chen Dandizi's The Other Side of the River: Talking Flower (2017) employs a similar pseudo-scientific method. This nearly three minute silent video depicts the movement of a flower in the winter sun and wind, with the artist's interpretations of these movements transcribed over the scene in Morse code.

While the pathologisation of feeling is invoked by Chen Zhe and Chen Dandizi as necessary to tapering off obsessive behaviour, Marge Monko touches on the harmful effects of the historical pathologisation of emotion. Abjection—in particular, female abjection—which can be one outcome of unrequited love, is explored in Marge Monko's video essay Dear D (2015), which largely draws from Chris Kraus' I Love Dick (1997). Monko examines lyrical letter-writing in the age of the internet, with the language of love rendered in an email being written. Alongside this work, Monko's photographic series 'Studies of Bourgeoisie' (2004–2006) was inspired by case studies written by Sigmund Freud of patients diagnosed with hysteria in the Hospital of Salpêtrièr in Paris.

A guiding aesthetic that can be found throughout Crush is in the references to lights—not quite a spark or a fire, but flickers—that appear as representations of yearning. South Ho's photographic series Gaze 1-05 (2014), Gaze 1-06 (2014), Gaze 2-08 (2016), and Gaze 3-03 (2018) show images of light switches and plugs, which draw on the logic of male and female plugs and connectors in electric circuits. Both of Pak Sheung Chuen's videos, TV Star (2006) and That Two Spots of Light (2016), were made by focusing a camera's lens on spots of light in buildings in the Pak Tin Estate, representing people watching television, and zooming in. These are paired with Followers and Sacred Objects (2012), a newspaper article that Pak published in Ming Pao, in which he wrote a religious story about the worship of lights in the Pope's eyes.

Together, Pak's works stretch a night of light-gazing into a romantic imaginary of stories that cannot be known. Likewise, Magdalen Wong's series of four watercolours on paper, 'Glow' (2014), depict the glare featured around popular cleaning detergents with the detergent and logos erased. What remains is a light blue print with off-white flares: an unnatural cyanotype with its main protagonist missing.

In Sunny Wong Wing Sang's two-channel video Magic Props (2016), absence is felt as a presence, drawing on the sentimentality of its viewers by deploying the story of Noby Nobi and his imaginary robotic cat friend Doraemon, an immensely popular cartoon character in the Asia Pacific region originating in 1960s Japan. In Wong's version, Doraemon, who is known as Ding Dong in Hong Kong, has been removed from the excerpted scenes, leaving Noby Nobi to appear as a lonely kid playing in the desolate suburbs of Japan. (The film was made following the death of voice actor Lam Po-chuen in 2015, who dubbed Doraemon into Cantonese for over 20 years.) In one scene, we can guess that Doraemon pulls a pigeon out of his magic pocket, to which Noby Nobi replies in Cantonese, 'Wonderful!' Followed by, 'Oh, it disappeared', as the shot zooms out from an empty bedroom wall. Noby Nobi is left alone gazing wistfully after the pigeon only he can see.

The last thread that runs throughout this exhibition is the tale of China's transformation, and the relations between contexts, roles, and more specifically, the Mainland and Hong Kong. Li Jinghu's Lover (2018) consists of a work table with aluminium plates and pieces of women's jewellery placed on the disks and between them. From little silver Eiffel Towers to sparkling rings, this installation acts as a production site for relationships formed in Dongguan. A factory town in the Guangdong Province of Mainland China, Dongguan was formerly infamous for its massive sex industry, where polyamorous relationships are not uncommon. The Writing * Mothers project (2017–ongoing) organised by Huang Jingyuan, Wang Yamin, and Feng Junhua, and presents texts that examine complex intergenerational relationships between mothers and children in Mainland China under the nation's transformation.

A tablet featuring a selection of research videos put together by Qu complements the use of love as a metaphor for politics, including a music video for Hacken Lee's Bei Jing Bei Jiao (2014), which was widely rejected by Hong Kong people on its release. The song opens with the melody of Somewhere Over the Rainbow (1939), followed by lyrics written by famous songwriter Wyman Wong talking about the estranged relationship between Mainland China and North Point, or more precisely, Beijing and North Point—the homonym of 'eventually'. The music video shows two puppets that have been apart for a long time but should get back together.

Made of light touches and strong gestures toward very different narratives of love, including love under erasure and as a metaphor for political life, Crush is an assembled palette to be digested slowly. Creating an emotional environment as opposed to conveying a direct message, it presents another way of looking at relations—both personal and political—by shifting gears and exploring what Alison Jaggar and others have described as 'outlaw emotions', which places the range aof human feeling at the centre of political life.

In the coda of her curatorial statement, Qu quotes Fang Siqi's First Love Paradise, a novel by Taiwanese writer Lin Yi-han: 'It has become clear to me, by now, that symbols and metaphors are the most dangerous things on earth.' As Jaggar writes, outlaw emotions 'are necessary to the development of a critical perspective on the world, but they also presuppose at least the beginnings of such a perspective'.—[O] 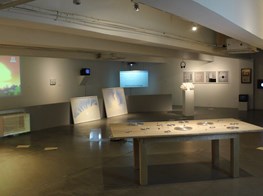 Para Site is delighted to present Crush, a group exhibition featuring 17 artists, that delves into the dark side of love and the complexities of unrequited emotion found. Curated by Qu Chang, Associate Curator Para Site, Crush will be on show from