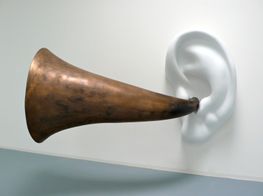 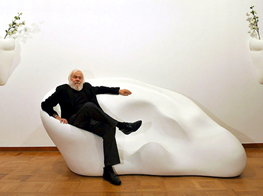 John Baldessari's immense orange-tinged Pineapple (2019) was among the last works he created before his passing on 2 January 2020. Made to scale to his towering height of 6"7, Pineapple will no doubt appear in parks, museums, galleries, and art fairs around the world for years to come, stopping people in their tracks wherever it crops up. The mischief of John Baldessari thus continues.

In 2007 at the age of 75, Baldessari came to sculpture relatively late. In 2006, the artist started a new series titled 'Noses & Ears, Etc.', which extended his use of photography, blanking out grainy faces with commensurate fields of bright colour, leaving ears and nose only. The use of collage and painted elements created mounted and recessed surfaces, which led him to think about sculpture. As an artist who believed that the goal for all art is 'to be as simple as a flash card', it seemed an obvious move: to bring pared-down forms into physical space and invite all kinds of associations.

Since his phototext pieces of the late 1960s, which he began after he famously incinerated his early paintings as part of Cremation Project (1970), later writing the statement 'I will no longer make any more boring art' in a 1971 video repeatedly, Baldessari's conceptual art played with deadpan, visual evocations of language. His works' oft-sardonic tone is exemplified in Tips For Artists Who Want to Sell (1966–1968), for which he commissioned a sign painter to write three 'tips' he had identified to create sellable work, including painting 'with light colours'. In another dig, Baldessari once more employed sign painters to create photorealistic images of hands pointing at various objects: a response to a statement by painter Al Held that conceptual art was 'just pointing at things'.

As an artist who believed that the goal for all art is "to be as simple as a flash card", it seemed an obvious move: to bring pared-down forms into physical space and invite all kinds of associations.

Baldessari's sculptures are perhaps ultimate acts of 'pointing'. They sit in plain sight, beckoning viewers to take part in the spectacle of encounter. Working with publisher Beyer Projects in 2007, Baldessari brought his first sculpture Beethoven's Trumpet (With Ear), into the world. Inspired by Beethoven's late quartets, which he wrote when he was deaf, the sculpture comprises an eight-foot-long bronze-plated ear trumpet that protrudes from a six-foot-high wall-mounted ear—a visual manifestation of the act of listening, its size hinting to loudness, in paradox to Beethoven's listening capacity, while hinting to the magnitude of his oeuvre.

Beethoven's Trumpet (With Ear) Opus # 133 (2007) will appear at Kunsthistorisches Museum Vienna for the exhibition Beethoven Moves to mark the 250th anniversary of the musician's death, while another sculpture of the series (there are six versions of the sculpture, each based on a different late string quartet by Beethoven) was recently on view at the Fondació Joan Miró in Barcelona for the exhibition Sound Art? (26 October 2019–23 February 2020).

Baldessari's sculptures are perhaps ultimate acts of "pointing". They sit in plain sight, beckoning viewers to take part in the spectacle of encounter.

For an artist who persistently forwent the globe-trotting tendencies of the art world and maintained a steady 9-to-5 practice in the studio alongside teaching—at CalArts, where he was a founding member, between 1970 and 1986; and UCLA, until 2008—sculptures appearing in international settings, contributing to his considerable CV of over 200 solos and over 1,000 group shows, convey an undeniable sense of humour. Ear Sofa and Nose Sconces (2009), a giant moulded soft rubber ear flanked by two upside-down noses with flowers sprouting from their nostrils, served as a resting pew at Art Basel's Unlimited sector in 2017, for instance.

Among Baldessari's other sculptures are Fake Carrot (2016) and Camel (Albino) Contemplating Needle (Large) (2013). The latter, which will be in Denmark, at Arken Museum of Modern Art as part of the exhibition Animals and Art (21 March–9 August 2020), combines a giant white camel staring intently into the thin eye of a long needle, alluding to the biblical saying that 'it is easier for a camel to go through the eye of a needle than for a rich man to enter the kingdom of God.'

Baldessari's output has proved versatile. By mastering processes of cropping, alteration, and erasure, he became adept at zooming in on information already present in the world to reveal its absurdity. 'I don't try to be funny', Baldessari explained in an interview with David Salle in 2103, 'It's just that I feel the world is a little bit absurd and off-kilter and I'm sort of reporting.' —[O]

John Baldessari was an artist's artist. He is celebrated as one of the most influential artists of his generation, both as a pioneer in conceptual art and as a teacher for more than three decades. In addition to his language-based paintings and

Based in New York’s art-rich Chelsea district, with satellite offices in Los Angeles, Pittsburgh, and Milan, Beyer Projects engages with artists in the early phases of their projects to publish sculpture and artist editions. Established in

Thomas J Price discusses his first solo show in Canada at The Power Plant Contemporary Art Gallery in Toronto, Ordinary Men (22 June–2 September 2019), which challenges the absence of Black bodies within the traditions of classical sculpture.