Art Basel OVR: Miami Beach will feature 255 galleries when it goes live from 2–6 December. Like the physical fair, cancelled this year due to Covid-19, the online viewing rooms include a strong showing from Latin America. Art Basel has arranged a Zoom walk through of their picks from the region taking place at 9am Miami time on Thursday 3 December. Meanwhile, Ocula's editors made their own selections of Latin American art to seek out at the digital fair.

Born in Guadalajara, Mexico, in 1936, Eduardo Terrazas' paintings are precise, both in the way they're rendered and thought through. 24.7 is part of the series 'Force of Gravity', which belongs to an overarching series called 'Cosmos' that explores the forces holding the universe together: gravity, electromagnetism, nuclear energy (strong) and nuclear energy (weak). 'Cosmos' is in turn part of another series, 'Possibilities of a Structure', an inquiry into the very essence of matter.

The grandness of Terrazas' vision in no way detracts from the immediacy of his work. The intersecting circles, connoting the gravitational pull of celestial bodies, have a striking graphical beauty, as you'd expected of the co-designer of the logo for the Mexico City Olympic Games in 1968. That logo, traced in concentric circles, was inspired by the folk art of Mexico's Huichol people, which continues to inform Terrazas' aesthetic decades later. Sam Gaskin

Despite the heavy metal that forms it, this work by Lima-based artist Ishmael Randall Weeks is airy with large open frames. Titled Concretos Penetrables (Biombo-Chakana) (2019), it's an investigation into 'a sculptural/architectonic space', a shapeshifting structure that reinvents itself depending on the viewer's vantage point.

Beyond the physical dimensions of its given environment, Concretos Penetrables exists at the crossroad of multiple historical and geographical spaces. Biombo originates from the Japanese byobu or folding screens, which reached Latin America via colonial Europe in the 16th century. Peru, along with parts of Argentina, Bolivia, Chile, and Ecuador, then belonged to the Incan Empire referenced here by the symbol of Chakana. Parallels can also be drawn between Concretos Penetrables and 1960s Brazilian Neo-Concrete works, such as Hélio Oiticica's installation made up of hanging sliding panels (Penetrables) or Lygia Clark's aluminium sculptures (Bichos).

Revolver Galería, which began on the first floor of a café in Lima and is now based in Buenos Aires, said they selected works that reflect on recent developments in Peru, which has witnessed the resignation of two presidents in one week amid public protests for major institutional reforms. Sturdy in foundation, and without separation between the inside and outside, Randall Weeks' work allows for a meeting of heterogeneous experiences and ideas. Sherry Paik

Striking for its acidic humour, São Paulo artist Pedro Caetano's work engages in a sardonic no-holds-barred dialogue with art history. Once a curator and gallerist himself, Caetano calls upon a lexicon of Western artists and movements that influenced a generation of South American artists.

Untitled (2016) typifies Caetano's response to those inspirations. A shiny aluminium skull, evocative of Damien Hirst's For the Love of God (2007), is transformed into an ashtray stuffed with cigarettes. Ash spills out from the piece precariously, characteristic of the studied carelessness with which the artist applies his materials.

Turbulent seascapes and scintillating night skies are recurrent themes in the drawing-based practice of Sandra Cinto. In this painting, presented by Casa Triângulo, which has been operating in São Paulo since 1998, Cinto's characteristically intricate lines delineate the peaks and turns of waves.

The artist cites the sublime landscape paintings of European Romanticism and Japanese ukiyo-e prints as sources of inspiration. Cinto's vision of nature's grandeur can be seen in her large-scale mural Mar Aberto (Open Sea) (2014) or the cyanotype Open Sea (2016), wherein mountainous waves and spiralling concentric circles suggestive of multiple suns or lighthouses invade the monochrome universe.

With its flat horizon and a strip of cloudless sky, Untitled (2020) may appear calm compared to the other works in the 'Open Sea' series. The jagged silhouette of waves, however, endlessly turning onto themselves and one another, are no less treacherous, an embodiment of the ocean's vastness. Sherry Paik

Born in Olavarría, a small city five hours' drive from Buenos Aires, Valentine Demarcos learned the ornate style of platería olavarriense silver-smithing from a young age. In this installation, he adapts ex-votos—votive offerings given to Catholic Saints for answering prayers—for a new generation.

Instead of tiny pendants of hearts or houses to say thank you for a successful surgery or the ability to make mortgage payments, his bronze miniatures celebrate over 1,000 hedonistic delights such as Nicki Minaj, marijuana, and Maurizio Cattelan's infamous wall banana. The work is showing at Isla Flotante, which began as an artist-run space in 2012. Sam Gaskin —[O] 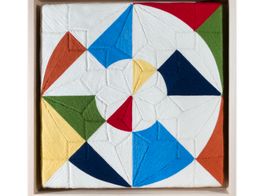 Defining the duct-taped banana as a sculpture or a concept could mean the difference between serving up to five years in prison and paying for a single piece of fruit. 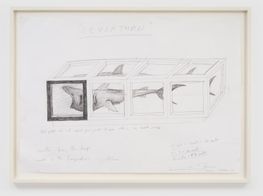 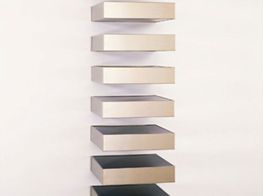 Arguably one of the most well-known American post-war artists, Donald Judd was an influential sculptor and critic regarded as an important figure of the Minimalist art movement. He is best known for his 'stacks' of square and rectangular boxes made