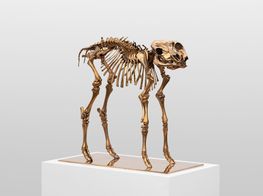 Sherrie Levine's exhibition Hong Kong Dominoes at David Zwirner in Hong Kong (4 September–13 October 2021) is named after 12 mahogany panels that recreate a set of dominoes that the artist bought in Hong Kong in 2012. 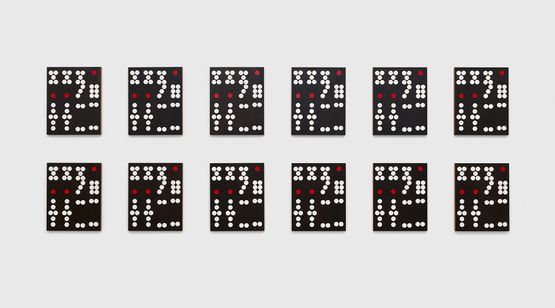 In this tautology, everyday objects are elevated to connect with the histories of minimalism and hard-edge abstraction, which are brought down to the realm of the everyday.

The cast-bronze sculpture of its namesake, Hobby Horse (2014), performs a similar turn as a literal translation of the French word 'Dada', the movement that Levine connects with her practice.

This material act of interrogating an existing artwork by zooming into its properties encapsulates a practice known for its controversial quoting of source material.

Levine's solo show at Metro Pictures in New York City in 1981 caused an uproar when it presented 22 black-and-white photographs by Walker Evans captured from exhibition catalogues: re-re-productions of 1930s Depression-era photographs commissioned by the government-funded Farm Security Administration, which sent Evans and contemporaries like Dorothea Lange and Gordon Parks to capture a struggling American South.

Among the images is a portrait of Allie Mae Burroughs, an Alabama sharecropper's wife, considered a defining snapshot of the time.

Since Evans' images were no longer subject to copyright law, Levine declared herself author of her photographs of his work.1 In response, Evans's Estate bought the series to prevent it from ever being sold, and when the Estate passed its holdings to the Metropolitan Museum of Art in 1994, Levine's work came with it.2

This parasitic outcome, in which Levine burrowed into another artist's archive, recalls her assessment of Duchamp's art historical contribution by treating everyday objects as readymade artworks: 'it's hard to conceive of a readymade he doesn't inhabit to a degree.'3

It's easy to find this icky. Thoughts of fashion labels pillaging the work of young designers comes to mind, and Richard Prince treating his comments on women's Instagram posts as his signature to claim their selfies as his; or the original appropriator Andy Warhol's use of Lynn Goldsmith's 1981 photograph of Prince for his commercial silkscreens.

As Levine put it back in 1985, 'The pictures I make are really ghosts of ghosts'—these are works that stir up the dead.

But the connection between Prince and Levine, both of the so-called Pictures Generation, ends at re-photography. Where Prince punches down by stalking young women, Levine has punched up. 'I only appropriate work by deceased, white male artists', she once said, 'because they have the authority, and one of my intentions is to subvert authority in the realm of the symbolic.'4

This tension feeds into the questions Levine raises through the act of remaking. Aside from Evans, she has rephotographed works by Edward Weston and Aleksandr Rodchenko, and traced drawings by Egon Schiele. In Hong Kong, 22 After Henri Matisse watercolours from 1985 showing faces drawn from singular black strokes will go on view for the first time.

In the 1990s, she reproduced Constantin Brancusi's early 20th-century marble and bronze 'Newborn' sculptures in sandblasted glass—one crystal, one black—after seeing a photograph of a Brancusi sculpture atop a piano in the interior of the British collector H. S. Ede's home. Carissa Rodriguez's film The Maid (2018) extends the chain, following these remakes through the art world.

Levine also turned the billiard table from a 1938 Man Ray painting into La Fortune (After Man Ray) (1990)—a three-dimensional copy that artist [Stephanie Syjuco][10] highlighted as part of SFMOMA's '75 Reasons to Live'.

For Syjuco, Levine's quoting of other artists—a tradition of remixing and translation that infuses art histories—is her way of inserting herself into discourses with which they are associated.5 Notably, a Western, male-dominated art history.

On painting copies of works by Mondrian and El Lissitsky, Levine has discussed 'making explicit' the 'Oedipal Relationship artists have with artists of the past', and how she, 'as a woman, was only allowed to represent male desire.'6 Which brings us back to her photographs of men's photographs.

[A conversation][11] imagined by artist Michael Mandiberg, where Mandiberg offers scans of Levine's Evanses, talks about the reproduced image as 'a photograph on top of another photograph'.

This superimposition articulates 'the dialectical nature' of authorship and originality and how they change over time, absorbing contexts beyond those from which they originated.

Take Levine's reconstitutions of Duchamp's notorious 1915 urinal readymade Fountain into bronze, which she renamed Fountain (Madonna) (1991) and Fountain (Budhha) (1996): elevations of a mass-produced object ordained into art that meander conceptually towards the bronze casts of Brazilian ex-voto figures showing in Hong Kong Dominoes.

More recently, Levine's 'Fountain' casts have become infused with scholarship asserting that Duchamp stole the idea for Fountain from Elsa von Freytag-Loringhoven, upending a vaunted chapter in art history and re-casting Picasso's declaration that the best artists steal in a less gleeful light.

From that angle, Levine's practice seems concerned with looking as a conceptual act that rejects the finality of meaning.

'We know that a picture is but a space in which a variety of images, none of them original, blend and clash', Levine wrote in 1981. 'A picture is a tissue of quotations drawn from the innumerable centers of culture.'7

Drawing on Roland Barthes' famous assertion that the birth of the reader must come at the cost of the author's death, Levine once stated: 'I want to make it clear that what I've always made is pictures to be looked at'.8 Less clear is what people will see.

Perhaps this is what charges Levine's works so uneasily: the onus is on the viewer to figure out what is at stake. As Levine put it back in 1985, 'The pictures I make are really ghosts of ghosts'—these are works that stir up the dead.

Look again at that state-commissioned portrait of Allie Mae Burroughs. Beyond the debate around who owns the image and who is its author, a crucial point gets lost in the fray. It wasn't Evans that made the photo. It was the woman in front of the camera. —[O]

A prominent figure of the American 'Pictures' generation, Sherrie Levine is best known for her reproductions of work by Modern photographers, such as Walker Evans and Edward Weston. Working across photography, paint, and sculpture, her conceptually 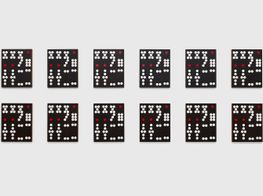 David Zwirner is pleased to present work by American artist Sherrie Levine at the gallery's Hong Kong location. The exhibition will showcase several bodies of work that are central to Levine's practice, and that distinctly engage the artist's