Adriana Varejão Looks
Beneath The Surface 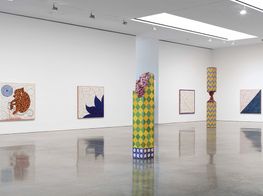 On the occasion of her solo exhibition at Gagosian in New York (Talavera, 3 May–26 June 2021), Adriana Varejão sits down with Ocula Advisor Rory Mitchell to discuss her unique approach to painting and sculpture, which draws on ceramic traditions to create distinct surfaces with potent historical references.

For this exhibition, I was immediately struck by the bright, clean abstract forms reminiscent of Modernist artists, that are painted onto your cracked plaster surfaces. Different motifs, including a jaguar, swallow, flower, and circles and squares, are enlarged on their surfaces, contributing to their boldness.

When you talk about 'clean, bright, abstract forms'—geometry was present in the history of art in the Americas long before the arrival of Europeans. The motifs in my exhibition span thousands of years of Mexican history, from the pre-Columbian to today.

Could you tell me more about the origin of these forms from Mexican talavera pottery and elsewhere, and your intention to shift or decolonise preconceived notions of cultural histories?

Talavera is a ceramic tradition that came from Spain and was further developed in Mexico, most prominently in Puebla.

Unlike the Baroque azulejo tiles found in Brazil, which were imported from Portugal, the Mexican tiles were hand-moulded by local artisans and permeated with the Mexican tradition of manual labour, manufatura (handmade). The talavera, like the Brazilian and Mexican Baroque, underwent a process of transculturation.

As with other cultural colonisation projects, there was a certain tension in the encounter with the Indigenous and African diasporic presence, which ultimately shaped these materials. So for my exhibition, I wanted to include elements from their own original tradition, in this contemporary context.

In the photos I took in Mexico in the 1990s, there was a wall full of talavera tiles—a syntax of forms with an intriguing mixture of modern and historical styles. Some forms immediately reminded me of the Brazilian artist Athos Bulcão, while the simple squares looked as though from the Bauhaus.

How is it that a single wall created by local artisans that was not considered high art could reveal a parallel history of art, a kind of syntax of many forms? We don't even need to go to a museum!

This wall reminded me of Jorge Luis Borges's story The Aleph, in which the author describes a single point that contains everything in the universe—a vacuum through which one can see everything.

In another story, The Writing of the God, Borges writes about an Aztec priest who was imprisoned in a cell next to a jaguar, and through admiring the patterns on the animal's fur, he views and contemplates the history of the world. That Mexican tiled wall was the same for me, and so I made a painting of it in 1998. So this painting is my Aleph for the current show.

Can you speak about how the Baroque has impacted your work as a contemporary artist?

The Baroque readily absorbed alien cultural signs, and the Latin American iteration is a miscegenated Baroque. This was a fundamental theory that acted as a starting point for me to play around with in my work from the late 1980s.

Alejadinho, a 17th-century mestizo artist and architect who built and decorated the Baroque Church of São Francisco de Assis in Ouro Preto, was, among many others, an important influence for me.

The political idea that the Baroque was a strategy and language system for colonialism came from there, and I began to work on this together with the idea of antropofagia from Oswald de Andrade's manifesto for Brazilian Modernism (1928).

Process clearly plays a crucial role for you in your practice, specifically through the cracking of the plaster laid down on your canvases, which takes weeks to occur. Has this balancing act between structure and unpredictability always been central to your work?

The craquelure surface has been present in my work since the early 1990s, when I used a gesso mixture to smooth the canvas, which then created subtle cracks on the surface.

On a subsequent trip to China, I made a connection between these cracks and Chinese Song pottery—a very distinctive 11th-century ceramic genre—and I became obsessed. The craquelure, which was at first considered an accident in ceramics production, came to be purposefully incorporated.

The cracks give some physicality to the work. I am not painting tiles; rather, I'm recreating a version of the object itself, which is a very important distinction. I like that it looks like a rhizome; like tree branches or veins in your hands.

There is a fragility and unpredictability; the craquelure occurs according to nature's innate intelligence. This also alludes to instability and how culture functions as a rhizome with many points touching each other and existing at the same time.

You have said elsewhere that your work indicates 'the fragility of tradition, the precariousness of the idea of plans and the instability of values in countries like Brazil where discontinuity is the rule. They represent the imminent time of the decomposition of the flesh'.

In the context of the current political climate in Brazil, your work seems to me to be as powerfully rooted in the present as it ever has been. Would you agree with this?

Yes, it is symptomatic of this kind of thinking. Brazil is in a terrible situation now. Levi-Strauss gave me the idea for that quote because he went to Brazil and wrote in Tristes Tropiques that while everything is under construction, it is already a ruin.

Brazil is a ruin because there is a total lack of a long-term plan. The last sculpture I made for the exhibition is titled Ruina Brasilis (Brasilis Ruin)—it appears as if it is being created and destroyed at the same time.

Your work is layered both formally and conceptually, but it is also incredibly visceral, which serves to enable this visual immediacy. How important is this physicality to you?

Physicality is important to me. In Brazil we refer to it as artes plásticas, and I always think about that idea—of plasticity and materiality. The emblem for the Baroque is the bleeding heart, and there is also a long and rich tradition of flesh in painting.

From Spanish bodega painting to Goya and Soutine, one can trace 500 years of the painting of flesh and blood. Important modern figures include Ivens Machado and Paul Thek.

How does living in a city like Rio de Janeiro and a country like Brazil influence your practice?

Rio de Janeiro is a place of contrasts. A city of enormous porosity, many elements easily mix together, and as a port city, it was always receptive to the influence of others.

The combination of Modernist architecture and tropical vegetation in the middle of the city itself is extraordinary. Life happens on the street and, of course, the beach, which is a place for social fluidity.

I also lived in Brasília for five years, from 1968 to 1972. At that time, it was an idealistic Modernist city that had recently been built from scratch. On the flip side, my mother worked as a nutritionist in a hospital in a satellite city populated by migrants from all over the country to service the needs of Brasília. Malnutrition among children was a big problem then.

In Brasília, people from all races were mixing together, and this experience made me feel the diversity of the country. Maybe this is why there is meat behind the surface of my work— there is always something more beneath the exterior. —[O] 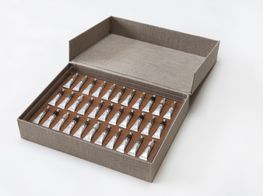