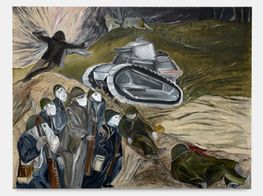 Just as intriguing as her artworks is de Jong herself, whose fiery temper and rebellious attitude has made her a fascinating figure to study both in the canon of art history and today.

Following a tremendous retrospective at the Stedelijk Museum in Amsterdam in 2019 and the first solo exhibition of her paintings in the U.K. at Pippy Houldsworth Gallery last year, her current show at MOSTYN in Llandudno, Wales, is the first comprehensive presentation of her prolific oeuvre in the U.K.

Titled The Ultimate Kiss (9 October 2021–6 February 2022), this non-linear presentation of works displays her broad range of artistic styles, including, but not limited to, expressionist painting, figuration, and pop art.

Born in the Netherlands in 1939, de Jong is best known for her involvement with the Situationist International movement, which was led by French Marxist theorist, filmmaker, and writer Guy Debord. The artists who were part of this politically engaged art collective believed that society had been 'lulled to sleep by consumerism.'

After being dispelled from the group in 1962, de Jong created The Situationist Times, releasing six editions in total until 1967. The English-language magazine explored ideas of chance, spontaneity, and play as important ways of disrupting the collective conscious of society—core principles of the Situationists.

De Jong's artwork is similarly disruptive, acting as a visual site for confusion and subversion. Paint erupts across the canvas in one explosive movement, grotesque creatures are intertwined against vibrant backdrops, and colours and textures contrast in lurid ways.

Expressive yet realistic, playful yet dark, her works are constantly seeking—or transcending—a balance that is constantly sought after in the world.

'Each painting is a deliberate choice,' de Jong explains. 'I look at the world; I read and smell whatever the world is; and then I deform it. I modify it. But rather than the focus being a shape coming out of the brush, it's what comes out of the painting.'

Ranging from drawing and printmaking to sculpture and jewellery, her works refuse to be contained to one genre. In the mid-1960s, her mainly figural paintings showed influences from pop culture, film, and illustration.

It was during this time that her compositions took on a comic book-style format, similar to a diptych. Several are included in The Ultimate Kiss, such as The pain is beautiful and After four hours the beans are revealing themselves, both from 1971. This led way into experimentation with sculpture, and a transition to a more expressionist style of painting.

Her work is also included in the collections of numerous international museums, such as the Centre Pompidou, Paris; MOCA, Toronto; Moderna Museet, Stockholm; Musée les Abattoirs, Toulouse, among others.

While it is difficult to place her in the study of art history, de Jong is a key figure of the European post-war avant-garde whose works are finally getting the attention that they deserve. —[O]

We spotlight some of the exciting young artists who have graduated this year from art schools in the US.

Works by the artist are shown alongside those by Kaylene Whiskey and Tiger Yaltangki.

The two artists explored form, colour, and materiality together.