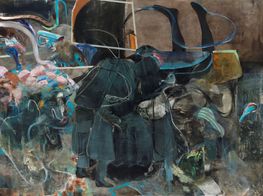 Juerg Judin met celebrated Romanian painter Adrian Ghenie in 2006, giving him his second solo exhibition and familiarising collectors with his work in Zurich, where his Berlin gallery was previously based. With Ghenie's latest exhibition at Galerie Judin now on view (We Had Everything Before Us, 1 May–10 July 2021), the gallerist reflects on 15 years of collaboration with the artist.

You opened your gallery in 2003 and had an exhibition of Adrian Ghenie's paintings in 2007. Could you tell me how this came about? When did you first meet each other or when did you first come across his work?

I first met Adrian in his hometown of Cluj, Romania, in the fall of 2006. I was working on a group show of young Romanian artists—the now legendary Cluj Connection.

My gallery was still in Zurich back then, and I was just about to join forces with Haunch of Venison. I had managed to meet all the eight artists chosen for that show, except for Adrian. He was very reclusive and didn't like travelling. So when I heard that he was going to have a little exhibition in Cluj, I decided to make the trip and meet him on his own turf.

There were only six or seven small paintings, and I acquired my first Ghenie. I still have and cherish it. Everything about Adi was mysterious but very intriguing. So I spontaneously offered him a solo show for the following year. It was to be his second ever, and his first outside Cluj.

Ghenie was extremely popular with collectors from the outset, but did you ever imagine that things would develop so quickly for him?

Every exhibition we did in the 15 years since sold out immediately. The largest painting in the 2007 show could be had for EUR 8,000. Zurich collectors walked into the gallery at the preview and, having never heard of this young Romanian before, asked, 'Can I buy this?'

His work has developed a great deal over the last four or five years and seems to reveal even more of his ability to handle paint. How do you view the progression of his painting since 2008?

Did I anticipate him becoming one of the most successful artists of his generation and his paintings selling for millions at evening sales? No! But from our discussions about art history—which remains our favourite topic—and recognising his technical brilliance, I was sure he was not a flash in the pan.

I have enjoyed the privilege of documenting his development since 2007 as editor and co-author of the three Hatje Cantz monographs.

About 200 of his best paintings are reproduced, and flicking through the pages, you realise that an incredibly intelligent but equally courageous painter has steadily intensified his goal of achieving great narratives with ever more abstraction.

He has not once rested on his laurels and has resisted trusting a 'formula', like many artists do once they have reached this level of success. Adi is very skeptical about the art market, his own achievements, and success; and that skepticism is one of his main assets.

How does Ghenie work in the studio? Does he work on several paintings at the same time? How long does it tend to take him to make a major painting?

Believe it or not: Adrian to this day works without any assistants! He's the archetypal 'lone wolf' painter, who stares at his blank canvases for hours—preferably deep into the night.

He doesn't like people watching him at work—me included. But I can answer two of your questions: yes, he works on several paintings at a time. And it is no secret that he thinks about future paintings and prepares their genesis with the help of elaborate collages.

Do you ever discuss ideas or concepts for exhibitions or even specific paintings with him?

Certainly not in any detail. Typically, we meet for lunch at my place. I cook and then we talk about art until dinner time.

Mostly, we do virtual tours through our favourite museum collections. No other person I know has as many Old Master paintings recorded in their memory as Adi.

At some point, a few weeks before the opening of a show, he'll invite me to the studio. It's always a bit of a shock to see an entire new series of paintings. They are never what you expect. —[O]