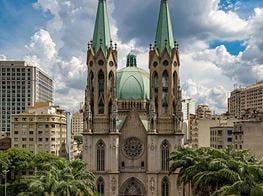 In this selection, we preview a collection of artworks on view at São Paulo's upcoming art fair SP-Arte by artists from South America spanning different generations and media. From historic artists such as Lygia Clark at Gomide&Co to contemporary names including Erika Verzutti at Fortes D'Aloia & Gabriel, this year's edition is set to be a vibrant affair.

First studying law at the Universidade de São Paulo in 1952, Antonio Henrique Amaral pursued a career in art after seeing modern works at the 1st Biennial in São Paulo in 1951.

Studying under Roberto Sambonet and later Lívio Abramo, the artist held his first solo exhibition in 1958 when he was just 23 years old.

Arthur Luiz Piza made his name in etching, receiving awards at the 1959 São Paulo Biennale and at Documenta Kassel in 1959 for his approach to the printmaking process.

Having studied painting under Antonio Gomide throughout the 1940s in São Paulo, Piza relocated to Paris in 1953, where he worked alongside colour etching master Johnny Friedlander, experimenting with aquatint as well as more sculptural approaches, including incising copper plates with designs.

This more recent work, created two years before Piza's death in 2017, reflects the artist's continued experimentation with bringing forms into space, with painted zinc shapes hovering in a cloud of galvanised wire.

Alongside artists Jesús Rafael Soto and Alejandro Otero, Carlos Cruz-Diez was at the forefront of a new wave of artistic expression in Venezuela in the 20th century.

The artist's kinetic works and architectural structures prioritised the experience of colour, which he perceived as its own autonomous entity.

Cruz-Diez's iconic 'Physichromie' series brings together vertical sheets that interact with light and with one another, so that new ranges of colour that are not present within the structure are generated.

The artist's work has been included in major solo and group exhibitions at galleries and institutions around the world, including La Patinoire Royale, Brussels in 2019; Museum für Concrete Kunst, Ingolstadt, Germany in 2018; and Puerta Roja Gallery, Hong Kong in 2017.

Born in 1963 in São Paulo, Alex Cerveny has established a multimedia practice of surrealistic drawings, paintings, engravings, and sculptures that blend text and imagery to create fantastical worlds.

Nature comes together with biblical and mythological figures, while the texts are drawn from a variety of sources spanning the ages, all rendered with incredible attention to detail.

As the artist has explained, 'I feel more a writer who writes images . . . The tradition that I appreciate in art is that of telling stories, as altarpieces, as Assyrian walls that tell stories of battles...'

Since graduating with a Postgraduate Diploma in Fine Arts from Goldsmiths in 1999, Brazilian artist Erika Verzutti has developed a unique visual language made up of playful, tactile forms.

Last year, the artist's work was included in a series of solo exhibitions at galleries and institutions including Alison Jacques and Nottingham Contemporary in the United Kingdom, Museu de Arte de São Paulo, and an online presentation with Andrew Kreps Gallery.

Using materials such as papier-mâché, clay, and bronze, Verzutti has the ability to transfer a sense of weightlessness to her objects, as emphasised here by her delicate placement of matches.

Concerned with the multisensory possibilities of art, Lygia Clark was dedicated to creating geometric abstract works, sculptures, and installations centred on viewers' participation with them.

This painting was created on the cusp of Clark's focus on hard-edge abstraction, featuring cubist elements that may have originated during her time studying under Fernand Léger as well as Árpad Szenes and Isaac Dobrinsky in Paris between 1950–1951.

Her shift between figuration and abstraction continued until 1958, after which she joined the Neo-Concrete art movement. The group, which included artists such as Lygia Pape, Franz Weissmann, Sergio de Camargo, and Ferreira Gullar, eschewed rational approaches to art-making in favour of expressive, sensual forms. 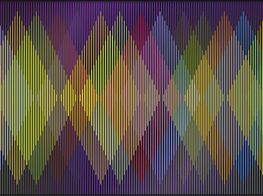 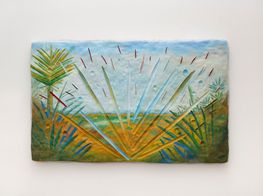 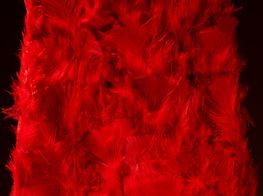 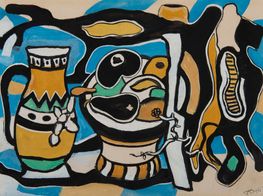 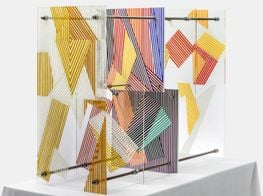 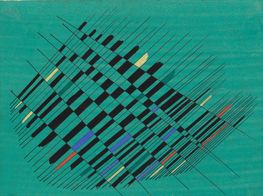 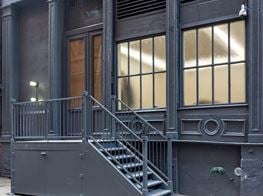 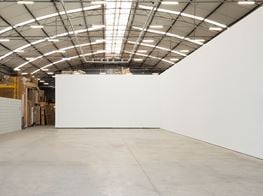