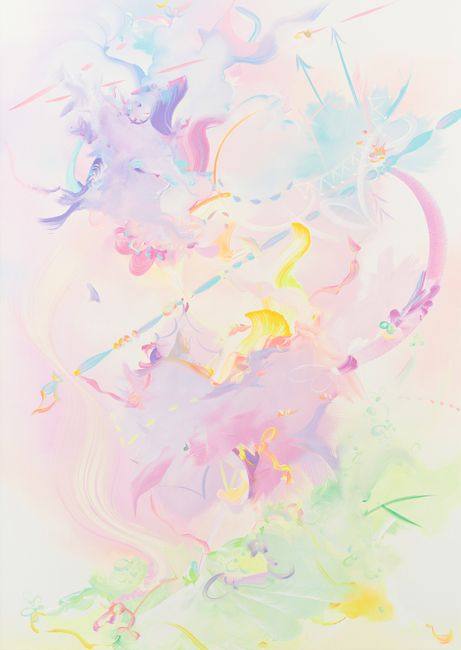 Titania does her spriting gently, 2018

Oil on canvas, edition unique
183 x 129.5 cm
72 1/16 x 51 inches
Signed and dated on the back
After restricting herself exclusively to the colour range white to black in a previous group of works, here Fiona Rae's conceptual starting point is almost the reverse, inasmuch as black is eliminated altogether and used neither as an independent colour nor for mixing with other shades. Instead, the focus is on delicate, fluidly merging pastel shades, with which Fiona Rae creates a cloudy picture ground, in which it is not entirely clear where one colour begins and another ends. The artist combines this pictorial space with graphic, sometimes merely suggested, expressive painterly gestures, which may be interpreted as either figurative or abstract. The pictorial space exudes a fathomless, floating sensuality, a bacchanal element that provides the basis for numerous graphic settings such as arrows or apparently stylized brushstrokes. As kind of super-signs, these act like characters performing the drama of painting on the canvas. Unsurprisingly, the titles also point towards this new theatricality in the work of Fiona Rae: they refer to archetypical fairy-tale characters and originate from plays by William Shakespeare: 'The Tempest' and 'A Midsummer Night‘s Dream.' Here, too, we sense Rae‘s fascination with the collision between high culture and the banal. In this context, the artist remarks: 'I am intrigued by the juxtaposition of high and low, of serious and comic, of familiar and esoteric, and what that might mean and suggest when found together in a painting or a title.' Courtesy Buchmann Galerie.

Be among the first to know when new artworks and exhibitions at Buchmann Galerie are added to Ocula.
Sign Up Login