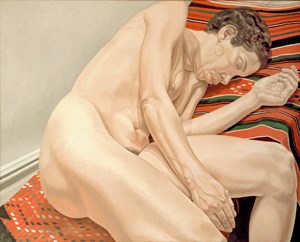 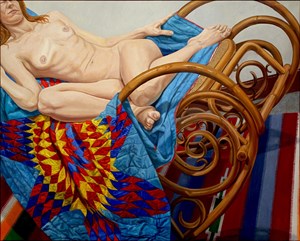 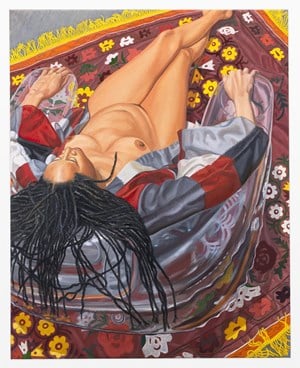 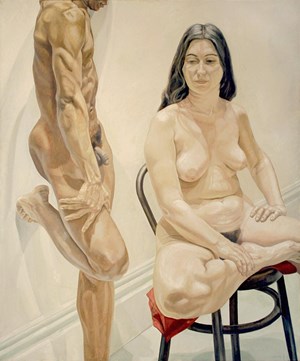 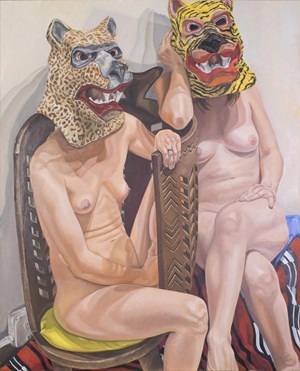 'I meant to create strong aggressive paintings that would compete with the best of abstraction.' So speaks one of the great masters of American figurative painting, Philip Pearlstein, who is choosing to celebrate his 95th birthday on 24 May 2019 in Paris.

To mark the occasion, Galerie Templon is taking a look back over the journey of a deeply original artist: despite studying alongside Andy Warhol in his youth, he took a totally different path, with a return to studio painting and the exclusive use of live nude models in complex yet incongruous compositions.

Over a dozen paintings, produced between 1969 and 2018, reveal a principled approach that has always been innovative despite the apparent simplicity of his subjects. As early as the 1960s, Philip Pearlstein defined a radical protocol that he still follows today, as part of his daily practice. He puts together strange scenes where his models, male or female, masked or undressed, pose for many hours over the course of many weeks. Compulsive bargain hunter and passionate collector, he immerses them in his skilfully crafted settings where he mixes mismatched furniture, patterned carpets, vintage toys, African sculptures, ethnic masks, gadgets, and more. He then meticulously paints his models with a neutral yet thorough touch, quashing any attempt to introduce a psychological aspect. The uncompromising and realistic result is free from any narrative interpretation and poses a disruptive question about the power of painting, perception, and the conventions of representation.

He has thus invented a depiction of the human body which has nothing of the academic about it and gives new meaning to the notion of the portrait. Like Lucian Freud and Alice Neel, he advocates a return to painting portraits and the naked form, although his work has the added element of a desire to rival New York's modernist abstraction, with which he was deeply connected, as well as minimal and conceptual art. His pioneering and unapologetic approach to the human figure has made him one of the precursors of the 'return to painting' that marked the 1980s in the United States, heralding the work of artists like Eric Fischl. In today's politically correct world, the radicality of his nudes and choice of straightforward settings are still remarkably relevant.

Born in 1924 in Pittsburgh, Pennsylvania, USA, Philip Pearlstein has been living and working in New York for almost 70 years. He studied at the Carnegie Institute of Technology in Pittsburgh then the New York University Institute of Fine Arts, where he formed a friendship with Ad Reinhardt. Philip Pearlstein worked as a graphic designer for Life Magazine before teaching at the Pratt Institute, Brooklyn then at Brooklyn College, New York. He has also been a guest artist at a great number of prestigious American institutions, including Yale University.

New York's Brooklyn Museum held a retrospective of his work in 1983. In 2018, the Saatchi Gallery in London dedicated a widely acclaimed exhibition to his work. He has recently exhibited at the Susquehanna Art Museum (SAM), Harrisburg, Pennsylvania in 2017, the National Academy Museum, New York and New York Studio School, New York (curated by Robert Storr) in 2014, and the Museum of Fine Arts, St. Petersburg, Florida in 2013.

His work features in over 70 public American collections, including at the Museum of Modern Art, New York, Metropolitan Museum of Art, New York, and National Gallery of Art, Washington, as well as at Tate Britain (London), Berlin Nationalgalerie, Museum Ludwig (Cologne) and the Berardo Collection Museum (Lisbon).

Sign up to be among the first to know when new exhibitions by Philip Pearlstein or at Templon open.