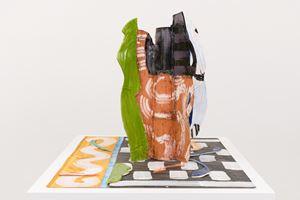 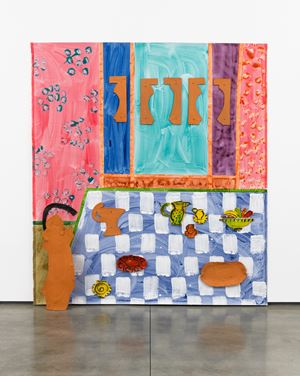 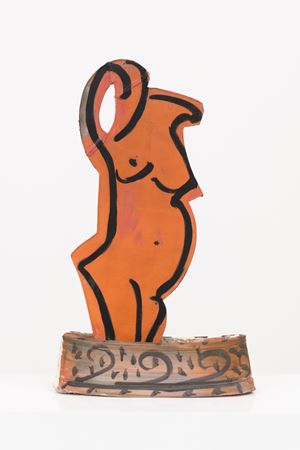 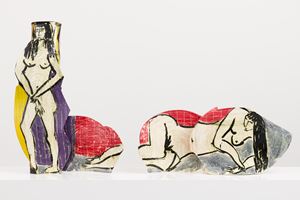 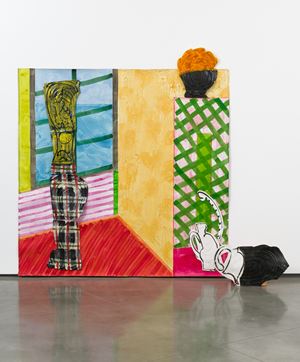 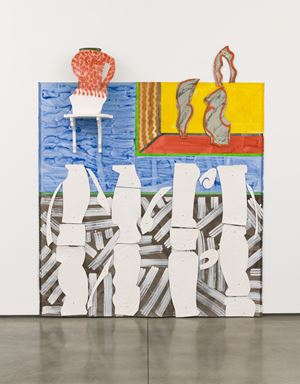 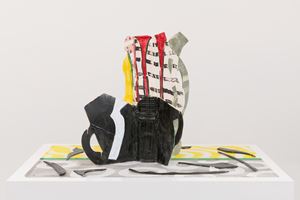 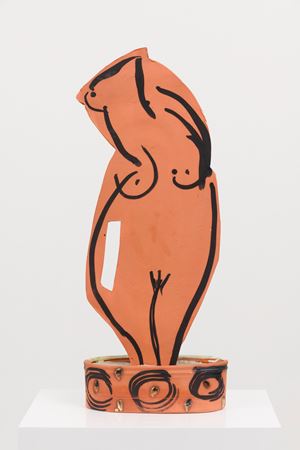 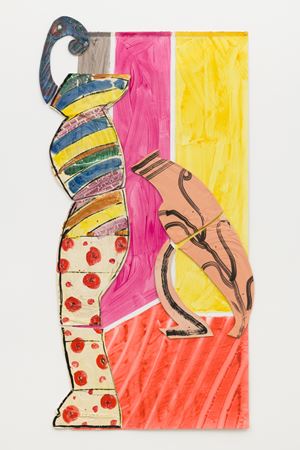 David Kordansky Gallery is pleased to announce Shadows and Silhouettes, an exhibition of sculptures and paintings by Betty Woodman (1930—2018). The artist's first solo show in a gallery since her death, the exhibition will feature works made between 2008 and 2016, and will focus on thematic and formal issues-creative use of negative space, two- and three-dimensional representations of vessels, the hybridisation of vessel and human figurative forms-that were central to her project throughout her career. The show opens on Thursday, June 27 and will remain on view through August 24, 2019. An opening reception will be held on Thursday, June 27 from 6:00pm until 8:00pm.

Over the course of a career that spanned more than 50 years, Betty Woodman revolutionised the use of clay and glazes in contemporary art. The sheer variety of her work, the range of her references, and the vitality and curiosity that appear throughout her oeuvre all help posit her as one of the most ambitious and singular American artists of her time, especially given the oft-marginalised status of her primary medium. Her synthesis of modernist syntax with a truly global array of cues from art, architecture, and design led to objects that are, in the words of critic Peter Schjeldahl, 'beyond original, all the way to sui generis.'

Shadows and Silhouettes features 12 works Woodman made over the last decade of her life, when she was executing some of her most radical experiments. The exhibition juxtaposes varied works in which painted and sculpted forms are repeated and reversed, and in which outlines of objects carve out negative spaces that re-appear as pictures either on canvases or glazed onto the objects themselves. They range from classic pedestal-based sculptures like the diptych His and Hers Vases: Life Drawing (2008)-whose standing and reclining female nudes are painted with black and white glazes on vertically- and horizontally-oriented vases-to the Cubist complexity of Aztec Vase & Carpet: Mariana (2015), whose canvas 'base' and dynamic, four-winged vessel provide surfaces for a continuously painted and glazed composition of alternating dark and light squares, among other motifs.

For Woodman, pictorial and sculptural versions of space were in constant conversation with one another. These conversations could be harmonious, dissonant, humorous, or soaring and poetic, depending on their context. The Chapel, a large painting with ceramic relief elements from 2011, is in the latter mode: flat ceramic elements, glazed a brilliant white, are arranged on the wall so that they resemble tall, multipart vases. The canvas on which they hang has been painted with slashing white brushstrokes against a black background. This optically dynamic play of two-dimensional volumes is accentuated by the dramatic three-dimensional composition defining the work's upper third, where a vessel with bright red glazing sits on a white shelf and another group of relief objects hover over the illusionistic, painted rendition of a room characterised with an intense red floor and yellow walls.

Works like these reflect the increasingly daring ways that Woodman employed architectural imagery, harnessing both its perspectival richness and emotional resonances. Summer Tea Party (2015—2016) is another example of this thrust in her work. An interior scene suffused with joyful light-and lightness of spirit-is divided into two main sections. A painting of a provocatively sloped table covered with a blue gingham cloth occupies most of the lower half of the canvas; affixed to it are ceramic representations of plates, pitchers, and a basket of fruit. Whimsy is met with mystery, however, in the form of five unglazed ceramic forms installed in a balustrade-like row over a painted window; the negative spaces between them take the shape of vessels. Such moves break with the already elastic visual logic Woodman establishes with recognisable images and ceramic 'pictures' of real-world objects, suggesting ghostly presences that flirt with pure abstraction.

In other cases, however, it is the presence of the figure that leaps out of Woodman's sculptures and paintings. As her project began to move beyond the constraints of functional ceramics in the 1970s, she began to explore-and explode-archetypal associations between the vessel and the human body. She envisioned her objects, as well as the pictures of vases she painted on and around them, as players in theatrical scenes. Each work became a domestic drama (or comedy) whose narrative is told in colours, shapes, textures, and patterns. Late in her career such narratives took on uncanny dimensions, especially in the paintings, with the silhouettes of three-dimensional vessels repeated on canvases behind them. In Tuesday Afternoon (2016) this effect takes centre stage. A white-glazed vessel stands on the floor, its arms arranged like those of a posing model; on the canvas, a brushy, semi-transparent image of a similar object hovers in space, as if the vessel had dreamed itself into a sun-filled parallel reality.

Sign up to be among the first to know when new exhibitions by Betty Woodman or at David Kordansky Gallery open.