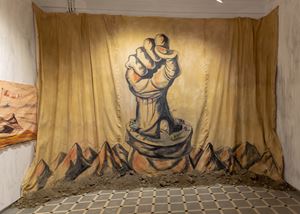 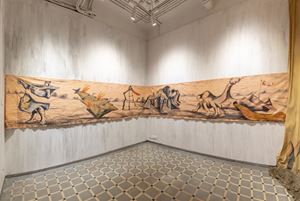 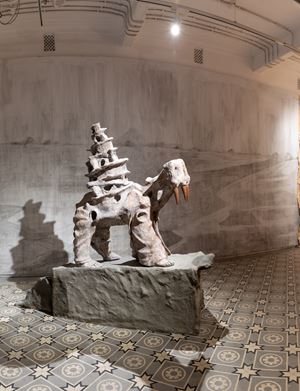 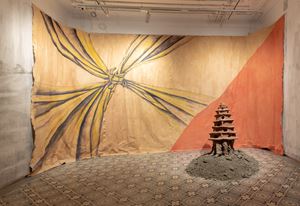 Experimenter presents Beneath the Palpable, Prabhakar Pachpute's solo at Experimenter, Ballygunge Place. Reflecting on complex relationships between human, social, economic and political crosscurrents that are at play in the battle for resource, ecology and power, the show furthers Pachpute's ongoing interest in mining politics, farmers' movements and human conflicts with nature, at his third solo at Experimenter. The exhibition previews on 22 January and will be on view until 4 April 2020.

Over the years, Pachpute's practice has explored critical and ethical enquiries of human society in peril, the accelerating decline of the ecosystem, and its repercussions. Whether personal, geographical or environmental, humankind is at the edge of an imminent catastrophe. In Beneath The Palpable, new bodies of sculptures, works on paper, paintings and immersive installations, present Pachpute's disturbing view of a dystopic, barren, post-industrial landscape, cohabited by metamorphosed animals, dysfunctional machines and headless humans that feel burdened by the weight of our actions.

The exhibition confronts viewers with questions that are difficult and urgent, an impending tipping point in the not so distant future. Like saplings sprouting forth in that desolate landscape, fisted hands rise up, at first sporadically and eventually in organised forms. Pachpute has been participating and documenting the several long marches by farmers from rural India into its cities witnessed over the last few years as indicators of hope and the coming together of landless, disenfranchised masses of people who have used their own bodies as a last resort to register their protest and express their concerns.

Pachpute uses personal experiences, research and observation to create characters that represent metaphors, stories and evidences. These characters confront, subsist, or even succumb to acute exploitation of land and mineral resources. Beneath the Palpable proposes as much a state of disarray as it indicates a chance of optimism. A possibility that something is about to change and that in the afterlife of objects and people who inhabit the landscape today, maybe an alternate legacy exists.

Sign up to be among the first to know when new exhibitions by Prabhakar Pachpute or at Experimenter open.
Sign UpLogin