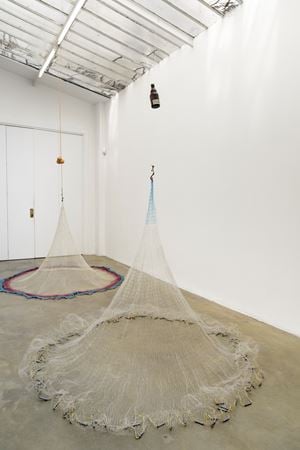 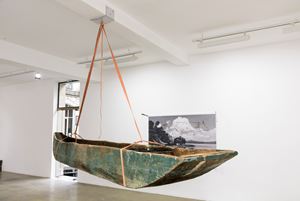 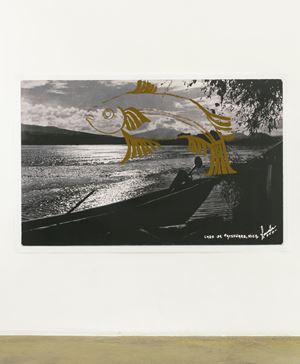 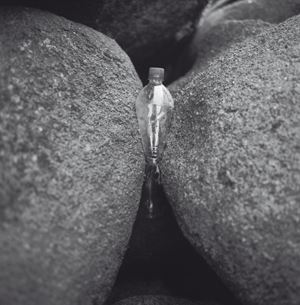 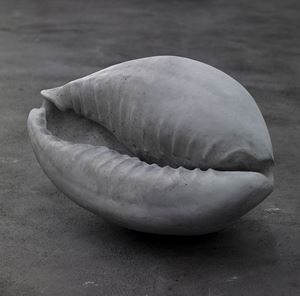 Rhé—from the Greek word Panta Rei—means that all is fluid.

This project is an art initiative led by a number of fellow galleries worldwide whose purpose is to come together and share their vision on issues surrounding the theme of Water, its disappearance, outbursts and cultural value.

From January 23rd to February 27th, 2021, eight works will articulate their own narratives and interpretations, highlighting the forcefulness of this irreplaceable substance.

Under the title: Ichárhuta atonal en cientotreyntaidosavos de tono (para Luis González y González), Abraham Cruzvillegas has suspended a traditional canoe used on the lake of Patzcuaro–Michuacan, (in the West of Mexico), above the ground, at a distance that represents the water shortage level, in terms of lowering, indexed according to the past fifty years. On the wall, we are struck by a large print on canvas, pinned by knives—a reproduction of a vintage postcard representing the lake of Pátzcuaro at a time when tourism, local craftsmanship and fishing were in abundance. The gracious, now useless nylon fishing net further raises the issues of fishing and nourishing, and their shrinking boundaries. A fifty pesos banknote (facsimile) displaying a fisherman in his canoe, over the lake's water, underlines the once national importance of fishing and its present loss.

'Bridging formal and social concerns'1, Jean-Luc Moulène's works 04 11 11 1,5L eau - Documents: Produits de Palestine and Régulier display the ephemeral materiality of objects and the dialogue they maintain with life and nature, when it comes to primary goods and trading. The trace of a human activity is directly linked to water and its extraction. In these photographs, water is portrayed as an object. The object being the core pattern in Moulène's work. A large colour photograph, Vanité - Saïda speaks of the doomed fate. It is a reflection on the awareness of humankind and its excesses.

Lastly, Melik Ohanian's Shell. The Cowry. It was introduced in the 8th century to the African continent by the Arab trade caravans, as an exchange and trade value, and progressively expressed fertility and wealth throughout the continent until the end of the 19th century. The Cowries grow on loose rocks and dead corals. Water was their original environment, yet civilisation has impacted their habitat and value.

Rhé is the first chapter of a series of exhibitions and special projects in response to the global crisis our world is facing, beyond the consumable.

Be among the first to know when new artworks and exhibitions at Galerie Chantal Crousel are added to Ocula.