Galerie Urs Meile is pleased to announce the first solo show of Michel Comte in China. As one of the most distinguished pictorial designers of his generation, Comte regularly straddles the lines between the realms of painting, video installation, sculpture, design, and film with a deep understanding and fascination of the use of light. Comte's latest body of work was produced in collaboration with local craftsmen in Beijing and Jingdezhen, the city renowned for its porcelain production. With these works, he continues his experimental practice in pigment painting, installation and contemporary photography as well as his ongoing examination of environmental concerns such as climate change and the resulting glacier meltdowns.

Michel Comte's solo show Light III is his third exhibition, after the 2017 museum shows at the MAXXI Museum in Rome and the Triennale in Milan, Italy. Light III will present a new body of works exploring the impact of the environmental decline on the glaciers and glacial landscapes of the world.

Salt and Dust is a series of monochrome paintings (mineral pigments, rock salt, and coal on fermented type rice paper, mounted on wooden board) in which Michel Comte applies a repetitive manual process of construction and deconstruction where layer on layer of pure mineral pigments and paint are applied on rice paper. Through this process, the artist achieves a texture reminiscent of the translucent and fragile surface of glaciers.

In Erosion (510x 33 x 33 x 10 cm, porcelain, rock salt, rock flour and mineral pigments) Michel Comte further develops his alchemistic approach onto porcelain—chronologising the unstoppable evanescence of the glaziers on a material that has proved to be conserved over thousands of years. The installation, with over 500 porcelain tiles mounted on the wall, forms a thirty-meter long and two-metre high porcelain strip. Born from Comte's sketches on paper, Erosion features gradations from white to black with different shades of grey. The mixture of mineral pigments and colour glaze used in the traditional porcelain production generates a surprisingly penetrating surface shows the artist's unique sense of light he gained from his longstanding engagement with photography.

The work series Ombre (30 x 66 x 66 cm, distilled water on handmade raw rice paper) shows Comte's understanding of light and the sentient combination with a subtle material. The rubbings on rice paper, accomplished with water and the natural drying through sunlight, carry the imprints of individual Erosion porcelain tiles. A number of the Ombre paper works will be pinned on the wall, without frames, so that the more delicate paper will vibrate with a slight breeze and contrast with the heavy and large Salt and Dust paintings.

Michel Comte (b.1954, Zurich, Switzerland) studied in France and England and started his career as an art restorer specialising in contemporary art. Comte worked with Andy Warhol and Yves Klein. In 1979, he met Karl Lagerfeld who gave him his first commercial assignment for Chloé and later Chanel. From the beginning, he has collaborated with Vogue Italia and Vanity Fair and worked in association with brands such as Dolce & Gabbana, Gianfranco Ferre, BMW and Ferrari amongst many others. In 2008, Comte met Ayako Yoshida. In 2009 he officially withdrew from fashion photography and devoted himself to the creation of artworks. 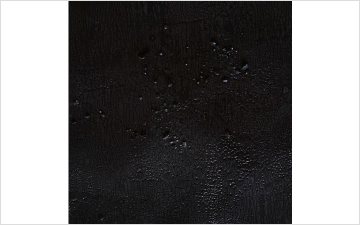