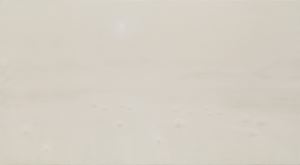 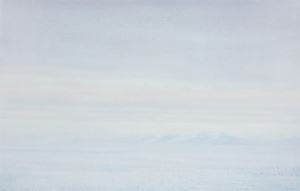 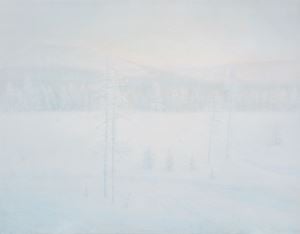 The most comprehensive exhibition of his works in China to date displays oil on canvas as well as paper works spanning 25 years of his oeuvre with earlier pieces he painted in Beijing and Shenzhen until very recent ones he just finished in Sacramento.

In the 1980s Qiu Shihua visited France and studied the works of the Impressionists. Qiu underwent an incredible development in the course of the 1990s, moving from traditional landscape painting to find a very personal style. An un-trained eye might find in his work little more than an almost unmodulated white, but his minimalist style of painting has nothing in common with the forms of expression from Western art history. The paintings seem Impressionist, but the Impressionists' ideals–the view from out-side, the pure appearance of the outside world on the retina–are the opposite of Qiu's. Rather, he represents the landscape–or what is left of it–as an expression of the soul. Nor are his white paintings obligated to abstraction or monochromatism. Qiu certainly abstracts from reality, goes to the limits in reducing the recognisable world, but it is always there somewhere; all his picture remain figurative. They are radical within the category of landscape painting. They follow no systematic, conceptual search for the fundamentals of painting, of the kind Robert Ryman pursues in his works, for example. Qiu Shihua's paintings originate in traditional Chinese landscape painting.

The painting seems to be behind a veil. The landscape reveals itself gradually to the concentrated and patient viewer. Like classical Chinese landscapes, Qiu Shihua's pictures are exempt from the laws of central perspective. There is no recognisable centre, neither a horizontal nor a vertical axis, no left or right, perhaps not even an up and a down. In a few brief sentences the artist describes his 'philosophy'–and in this case the term really is justified. 'For me north, south, east, or west count for nothing, nor do red, yellow, or blue, and certainly not past, present, or future. With endless emptiness in the heart there is neither coming nor going; they are one and the same. So are my works too: simple and pale, calm and empty. All being and non-being is hidden in them, completely self-contained. In the zero condition the original countenance of the soul reveals itself.'

Like the old Chinese masters, Qiu paints an inner world. The atmospheric perspective invites the eyes to roam over emptiness; a roving that permits nothing more than a diaphanous, mystical presentiment of another world. 'According to Qiu, his working process grounds on the premise of forgetting about such painterly matters as motive, technique, emotion, thus achieving pure sensuality in the void space from which the image must emerge rather than construct itself.' In their method, Qiu Shihua's white paintings follow a tradition that goes back more than a thousand years, but in their appearance they seem radically modern, even provocative. They are timeless, offer a wealth of perceptive possibilities, and can be regarded as one of the most interesting and certainly least expected contributions to painting in the past decades.

The gallery fully aligns with the current restrictions regarding COVID-19. The exhibition can therefore be visited by appointment only until further notice. For everyone who will not be able to see the show in Beijing, we take great pleasure to announce that it will travel to Switzerland and is planned to be on show from September through November.

Qiu Shihua was born in 1940 in Sichuan Province, but today divides his time between Beijing Shenzhen and Sacramento. In 1999 Kunsthalle Basel arranged his first monographic exhibition outside China and since then his work has been included in numerous collective and solo exhibitions in worldwide such as The New York Kunsthalle, USA (2001), Kunstmuseum in Berne, Switzerland (2005), Berkley Art Museum, USA (2008) Hamburger Bahnhof, Germany (2012), Metropolitan Museum of Art, USA (2013) Vancouver Art Gallery, Canada (2014), De Warande, Belgium (2018). His works have also been presented at the Sao Paolo Biennale in Brazil (1996), at the Venice Biennale 1999), and also at the Shanghai Biennale (2004).

Sign up to be among the first to know when new exhibitions by Qiu Shihua or at Galerie Urs Meile open.