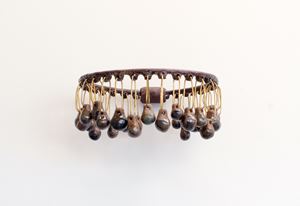 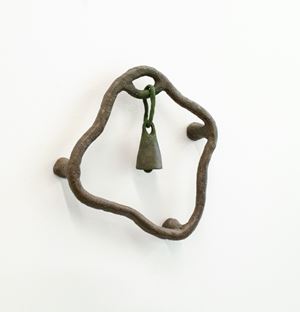 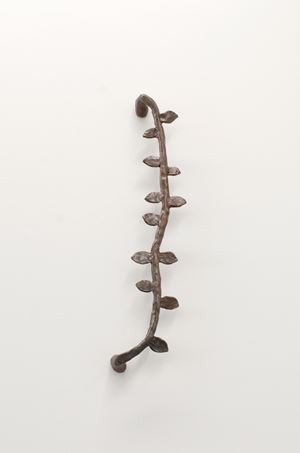 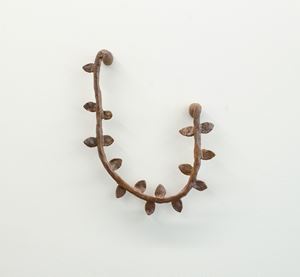 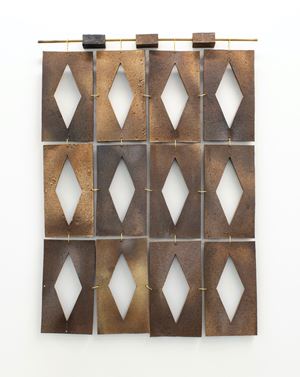 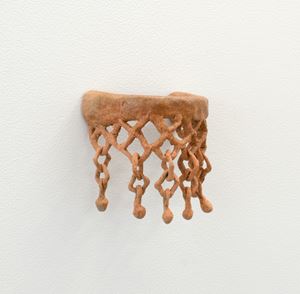 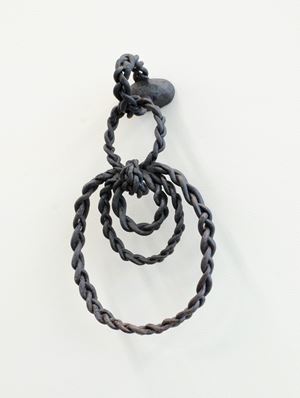 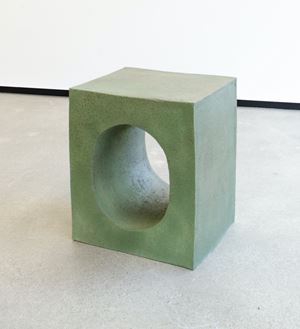 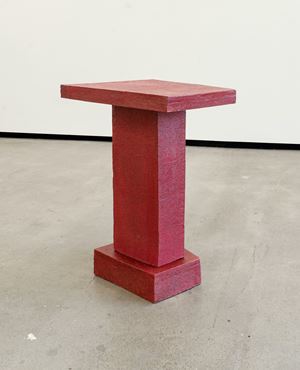 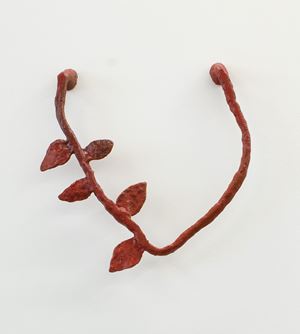 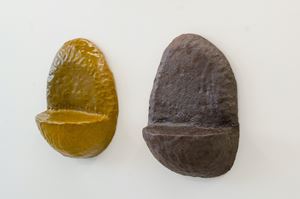 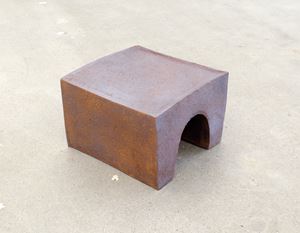 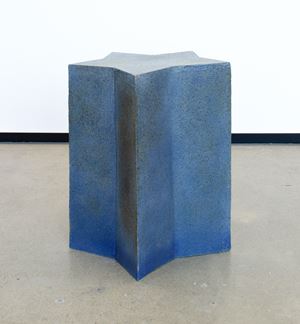 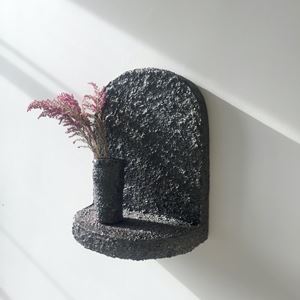 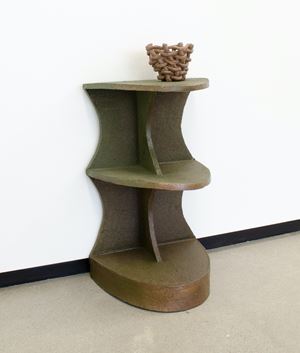 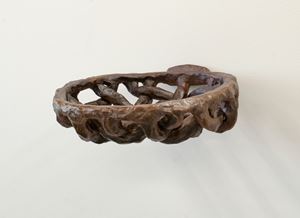 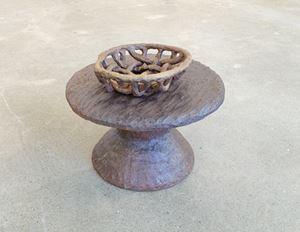 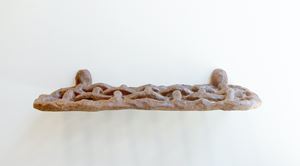 Stone Age is the first large-scale solo exhibition of Jaime Jenkins stoneware at Jhana Millers and continues Jaime's explorations into the possibilities of clay.

Jaime hand-builds pieces that are not confined to any definitions of what clay can and should do. Teetering on the edges of functionality and fragility, her works often take on organic and intricate forms. Things that are not traditionally made with the hard and fragile material, or that create movement and sound, such as chains or bells are frequent subjects in Jaime's practice.

Jaime is also interested in pushing the structural capabilities of clay — constructing dense architectural pieces that can be used as stools, shelves and tables, or works that simply exist in isolation as large sculptures. Taking months to dry and with many succumbing in the kiln at the final stage, Jaime is still learning the extent to which she can push the material.

A main source of inspiration for Jaime is her experiences of nature and natural forms, which she translates into her stoneware. Jaime speaks of feeling 'filled up by nature' when she spends time in the landscape — out for a bush walk or diving into a water hole. The glazes and slips Jenkins uses are earthy and celestial, reflecting this deep attachment to the environment. Starry blues, forest-floor greens and deep grounding reds are some of the colours Jenkins has chosen for the pieces that make up Stone Age.

Jenkins has an Advanced Diploma of Visual Arts in Ceramics from Toi Ohomai, Bay of Plenty. The artist has also completed internships in Aotearoa and London and recently completed a residency at Driving Creek Pottery in the Coromandel.

In early 2020 Jenkins exhibited Break a Fig as part of the Fired Up Festival of Ceramics and also presented her work in the accompanying symposium. Other recent exhibitions of Jenkins' work were at the Dowse Art Museum, Wellington (Dirty Ceramics, 2020), SPA_CE Gallery, Napier (on the verge of blue, 2019), Michael Lett and Ivan Anthony, Auckland (Gestamtkünstwerk, 2019), and Jhana Millers (Salt Pillars, 2019 and Summer Selection, 2020).

Jaime Jenkins creates environments out of ceramics. Drawing heavily on existing and imagined environments, Jenkins makes her own versions of objects she sees and aims to capture feelings of awe and peace that she experiences in nature. The artist's ongoing interest in the lineage of ceramics across the world and throughout history lingers in each object she creates.

In Stone Age, Jenkins continues to explore the boundaries and opportunities of clay. Pushing and pulling the material, Jenkins intentionally pushes towards looseningand softening her sculptures, resulting in works that appear malleable and supple. In Harvest plait, a braided wall hanging emulating rope is twirled into perfect loops and chains. Although mimicking a textile material, the artwork looks strong, the chains are tight and hold their form. In Wall Basket and Woven Shelf, woven objects attach to the wall, their weaving intertwined and obvious. The kete face upright, sitting both without a shelf, and as a shelf, out from the wall. This very notion of hanging the work straight out from the wall demonstrates Jenkins' clever use of the material, presenting a usually soft object as not, which overcomes the gravitational forces it usually succumbs to.

While Jenkins pushes to soften some objects, she simultaneously pulls to strengthen and refine others, making works that are structural, architectural and appear heavy, out of clay — a material often seen as delicate in its final form. Jenkins takes the shelf as inspiration for S_tone Shelf, Rounded Shelf I_ and II. Stone Shelf is a wall shelf glazed with rocks the artist found at her favourite water hole in Karangahake Gorge. It hangs on the wall, able to be used as a shelf for, or without, other objects. Easily holding its own, Stone Shelf's lumpy and bumpy surface combined with strong structural form appears as if it has been dipped in the gritty sludge at the bottom of the water hole. Three Ledges, a reimagined floor shelf of semi-circular forms sits strong in its mossy green pride. The architectural influence is clear as each element of Three Ledges is thoughtful, with convex and concaving shapes working in symmetry. As Jenkins' work gets both softer and stronger, the gap in between becomes wider as she explores each extremity of how the material can perform.

Jenkins creates a space for visitors that ensures we enter her world when we walk into the gallery. In Stone Age Jenkins' sculptures range from large to small, dark to light. In the space, the works sit in conversation with each other, as if exchanging feelings and ideas between themselves, and charging up the space to create the atmosphere Jenkins desires.

Different from earlier exhibitions, Jenkins' colour palette for the sculptures in Stone Age is darker, richer and cooler, with both celestial and earthier colours glazing her forms. Nighttime starry blues, forest-floor greens and deep grounding reds depart from her previous light yellows and greens. A colourful addition is Star pillar, a cornflower blue celestial star pillar sitting gloriously, facing upwards to the sky. Although this was not an intentional shift in palette, Jenkins posits that she was drawn to these colours for their intensity and richness.

Jenkins is interested in how she can translate her experiences of nature and natural forms into her ceramics. The artist feels "filled up by nature," when she goes on a bushwalk, or dives into a water hole. These encounters with the landscape and its natural forms drive Jenkins to explore how to depict these experiences in her work. To do this, Jenkins describes that when making, she aims to embody the same feelings, and then pours them into the forms she is constructing. Jenkins' pushes her recreations of organic forms further with Brown Vine I (Straight) and Brown Vine II (Curved). Gentle vines with their petals and twisting, climbing tendrils are firmly planted to the wall, making the gallery their garden.

The artist's continual interest in the lineage of pottery is alluded to in the exhibition's title. Jenkins' practice examines this lineage not only in Aotearoa, but from ancient time periods and more recent ones. The artist is inspired by other ways of building throughout history, and in her own practice pushes to reimagine environments with her own versions of things to imagine ceramics of the past. Jenkins explores the intersections between ornamental and functional in these other worlds, and balances them in her own practice. Stone Shelf, Three Ledges and Star Pillar all have functions as furniture, however Jenkins' twists alter the reality of the object we are used to seeing.

Jaime has an Advanced Diploma of Visual Arts in Ceramics from Toi Ohomai, Bay of Plenty. The artist has also completed internships in Aotearoa and London and recently completed a residency at Driving Creek Pottery in the Coromandel.In early 2020 Jenkins exhibited Break a Fig as part of the 'Fired Up: Festival of Ceramics' with us at Jhana Millers Gallery. Other recent exhibitions of Jenkins'work were at the Dowse Art Museum, Wellington (Dirty Ceramics, 2020), SPA_CE Gallery, Napier (on the verge of blue, 2019), Michael Lett and Ivan Anthony, Auckland (Gestamtkünstwerk, 2019), and Jhana Millers Gallery (Salt Pillars, 2019 and Summer Selection, 2020).

Sign up to be among the first to know when new exhibitions by Jaime Jenkins or at Jhana Millers open.
Sign UpLogin