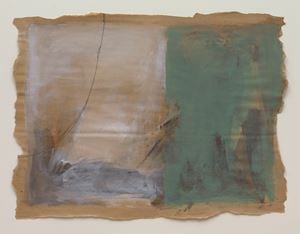 Kerlin Gallery is delighted to present Broken, an exhibition of new paintings and sculptures by Guggi. The opening reception will take place on Thursday the 12 December in the company of the artist.

Since the early 1990s, Guggi’s work has continued to explore the depiction of common everyday objects. With a focus on repetition and abstraction, Guggi’s signature motifs of bowls and other vessels are transformed and set free from their normal context often articulated with a deceptive simplicity that heightens their stillness and meditative presence.

In this new exhibition, Guggi continues the 'Broken' series, first exhibited at Chateau La Coste, France, in 2018 and at Yoshii Gallery, Tokyo, in 2019. Working on distressed brown paper with torn edges and surface creases he divides the picture plane into two distinct sections; solid velvety, textured but geometric rectangles are juxtaposed with more open and fluid spaces. Now the line drawing of Guggi’s signature motifs begin to disappear and are replaced by urgent and gestural mark making as the organic forms embedded in the surface of the paper becomes self-evident. Thin washes of paint over weathered hues of colour cloak this symbolic terrain in transparent layers of time and memory.

In addition to the paintings, the floor of the gallery is occupied by a series of three bronze bowls. With their exact same form and dimensions, matt black exteriors and polished interiors, these stark unadorned vessels act as striking material ’here and now’ counterpoint to the wall works.

'By salvaging beauty from distress, soulfulness from fragmentation, Guggi creates objects from another world. His battered blueprints of archetypal vessels, spectral beneath a haze of fraying colour, don't sit so much as shudder, as if lit by a source deep inside that confounds their material substance. His are excavations of dissolving shape—half-remembered and half-erased. Fragile yet enduring, they echo an esoteric tradition of shattered urns, jars, and cups that dates back centuries—perennial metaphors for the breaking of forms necessary for the release of creativity. At once poignant and philosophical, figurative and abstract, Broken hovers between the physical and the spiritual, like long lost maps of the soul.'

– Kelly Grovier, historian and art critic on the 'Broken' Series, 2019

Sign up to be among the first to know when new exhibitions by Guggi or at Kerlin Gallery open.