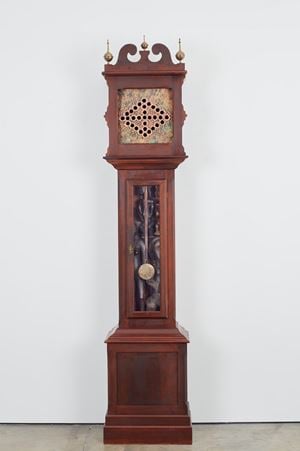 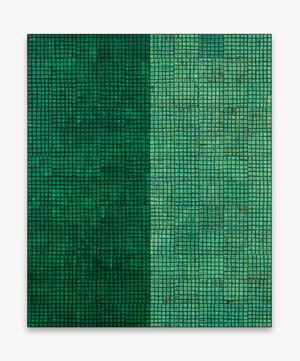 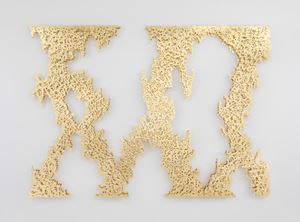 Lehmann Maupin is pleased to announce Origins, a group exhibition marking the gallery's third presentation in Palm Beach, featuring new and recent work by McArthur Binion, Teresita Fernández, and Nari Ward. Over the course of their respective practices and through distinct mediums and diverse approaches, these artists have produced bodies of work that challenge traditional narratives around place, identity, memory, and belonging.

New paintings by McArthur Binion will be on view, including works from his iconic 'DNA:Study' and new 'Modern:Ancient:Brown' series. Here, Binion combines collage, drawing, and painting to create autobiographical abstractions of minimalist patterns over an 'under surface' of personal documents and photographs. From photocopies of his birth certificate and pages from his address book to pictures from his childhood and found photographs, the poignant and charged images that constitute the tiled base of his work are concealed and abstracted by grids of hand-painted oil stick. Binion's practice is the subject of a newly published monograph, McArthur Binion: DNA (DelMonico Books, 2021). The artist will have a solo exhibition of new work at Lehmann Maupin New York in September 2021.

The featured works by Teresita Fernández exemplify her ability to carefully merge the material and the conceptual. In Ghost Vines (Yellow Gold) (2015), Fernández utilises reflective materials to draw the viewer in, creating an intimate and interactive experience of wayfinding. The work delves into ideas about human perception and nature by combining imagery from the natural world (vines) superimposed with the reflected image of the viewer standing before the work. This piece reflects concepts explored by Fernández in her large-scale public works, including Fata Morgana in Madison Square Park (2015), Solarium (Sanctuary) (2019), and the forthcoming installation, Paradise Parados, commissioned by the BAM Harvey Theater to be unveiled in summer 2021.

Also presented in Origins is Nari Ward's Anchoring Escapement; Mahogany Ithaca (2018). For this work, Ward refurbished and altered a grandfather clock case, replacing its face with a Congolese cosmogram symbol that represents the cycle of birth, life, death, and rebirth, and filling the inside chamber with African figures from the 1800s. Widely celebrated for his sculptural installations of found objects, Ward often uses the discards of consumerism, mostly found in his neighbourhood in Harlem, to reveal the emotions inherent in everyday objects. With this intervention, Ward re-contextualises his source materials to create complex, metaphorical juxtapositions that confront social and political issues surrounding race, poverty, and consumer culture. Ward's work is also included in the timely exhibition Grief and Grievance: Art and Mourning in America, conceived by curator Okwui Enwezor and currently on view at the New Museum, New York.

Taken together, the works in this presentation offer a cross-section on art making today, illustrating how artists merge cultural influences, personal experiences, and global concerns as a means of critically engaging with contemporary culture and the issues of our time.

7 new artworks have recently been added by Lehmann Maupin.
Sign up now to be among the first to know when new artworks are added.