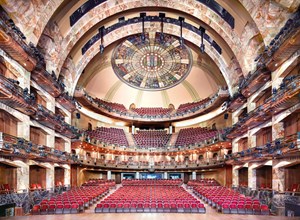 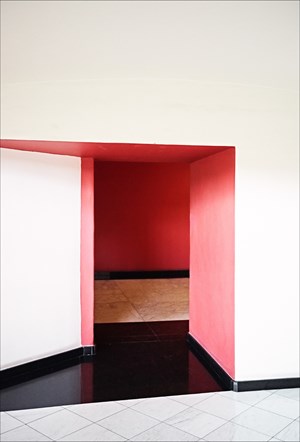 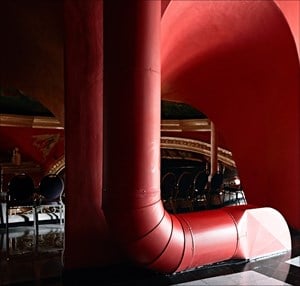 Candida HöferPipes, 2015C-print
70 x 72.4 cm Galería OMR Enquire
View More Works By This Artist
Marked by the Dual Year of Mexico and Germany from April 2016 to May 2017, OMR is delighted to announce the solo exhibition In Mexiko of widely acclaimed German photographer Candida Höfer (Eberswalde, 1944). Studying at the Kunstakademie Düsseldorf under the tutelage of Bernd and Hilla Becher, Höfer has retained a methodical approach when photographing empty public spaces worldwide. Yet she does not consider herself to be an architectural photographer. In her words “an absent visitor is frequently the topic of conversation”.

Over the past forty years Höfer has photographed portraits of spaces inside numerous internationally recognisable venues, including the Louvre, The Uffizi Gallery, The Hermitage and Trinity College Library Dublin, amongst many others. Empty theatres, empty churches, empty libraries, empty palaces: each interior captured by Höfer spans various historical and cultural contexts. The artist produces these photographs by combining three separate perspectives of each space, using only long exposure and the existing light source. The effect is a rare combination of intimacy and scale, both public and private experience.

For the exhibition In Mexiko Höfer visited the country in October 2015, photographing several iconic buildings in the states of Jalisco, Guanajuato, Mexico City, Puebla, Oaxaca and the State of Mexico. The result is a series of photographs that will be exhibited across national and international institutions. With an initial selection shown at OMR, further works will be exhibited in April 2017 at San Ildefonso, followed by the Amparo Museum in 2018 and additional venues soon to be announced. As recently commented by the artist, in the large-format photographs “my greatest interest is the light, the spaces, the symme try and the variations… In the case of the smaller, newer works, I examine these elements but in a more abstract manner”. In this way the images are at once distinctively Mexican and universally recognisable: whether the Popocatépetl and Iztaccíhuatl volcanoes depicted on the stage curtain of the Palacio de las Bellas Artes by American luxury brand Tiffany; the Orozco Mural at Hospicio Cabañas or the quietness of a dimly lit, empty space.

Parallel to the exhibition, a publication will be produced with two editions: one edited in Spanish and English, the other in German and Spanish. Including a wider selection of images including informal snapshots from Höfer´s time in Mexico, each is accompanied by a text written by José N. Iturriaga. Candida Höfer will be present for the opening of In Mexiko and during Gallery Weekend, appearing in conversation with Itala Schmelz at the Tamayo Museum on 24th September.

Sign up to be among the first to know when new exhibitions by Candida Höfer or at Galería OMR open.