London-Pace Gallery is honoured to present a solo exhibition of new works by Light and Space master James Turrell at 6 Burlington Gardens. On view from 11 February to 14 August 2020, the exhibition marks the artist's ninth solo presentation with Pace and features three new works from his 'Constellation' series.

Influenced by the notion of phenomenology in pictorial art, Turrell's early work focused on the dialectic between constructing light and painting with it, building on the sensorial experience of space, colour, and perception. These interactions became the foundation for Turrell's later developed oeuvre, which evolved to an investigation of the immateriality of light itself.

With these new pieces, Turrell continues his exploration of technological possibilities combined with sensory practices and gradient colours. Presented in site-specific chambers, the works feature elliptical and circular shapes with a frosted glass surface animated by an array of technically advanced LED lights, which are mounted to a wall and generated by computer programming. The light changes are subtle and hypnotic, one colour morphing into the next. The programme runs on a loop that is imperceptible to the viewer, prompting a transcendental experience.

'To some degree, to control light I have to have a way to form it, so I use form almost like the stretcher bar of a canvas,' Turrell states. 'When I prepare walls, I make them so perfect that you actually don't pay attention to them. This is true of the architecture of form I use: I am interested in the form of the space and the form of territory, of how we consciously inhabit space.'

Since his earliest 'Projection Pieces' (1966-1969), Turrell's exploration has expanded through various series, including 'Skyspaces' (1974-), 'Ganzfelds' (1976-), and perhaps most notably, his Roden Crater Project-an unprecedented large-scale artwork created within a volcanic cinder cone near Flagstaff, Arizona. Representing the culmination of the artist's lifelong research in the field of human visual and psychological perception, Roden Crater (1977-) is a controlled environment for the experience and contemplation of how we see light in varying contexts. With fundraising and construction already underway, the project, once completed, will contain 21 viewing spaces and six tunnels, offering a gateway to the contemplation of light, time and landscape.

James Turrell: Passages of Light is currently on view until 29 March 2020 at Fundación Jumex, Mexico City. In parallel with London's exhibition, Pace Gallery and Kayne Griffin Corcoran will co-present an immersive exhibition of work by James Turrell across both galleries' art fair booths at the 2020 edition of Frieze Los Angeles.

James Turrell (b. 1943, Los Angeles), associated with the Light and Space Movement initiated in the 1960s, has dedicated his practice to what he has deemed perceptual art, investigating the immaterial qualities of light. Influenced by the notion of pure feeling in pictorial art, Turrell's earliest work focused on the dialectic between constructing light and painting with it, building on the sensorial experience of space, colour, and perception. Since his earliest 'Projection Pieces' (1966-1969), his exploration has expanded through various series, including 'Skyspaces' (1974-), 'Ganzfelds' (1976-), and perhaps most notably, his Roden Crater Project (1977-), a large-scale work in a volcanic cinder cone in the Painted Desert region of northern Arizona. Turrell's practice has also materialised in small-scale works, including architectural models, holograms, and works on paper. 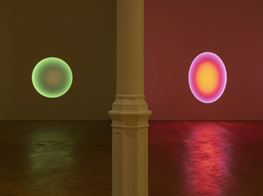 Closed since the middle of March, galleries in central London will finally reopen to visitors from next Monday.

Sign up to be among the first to know when new exhibitions by James Turrell or at Pace Gallery open.