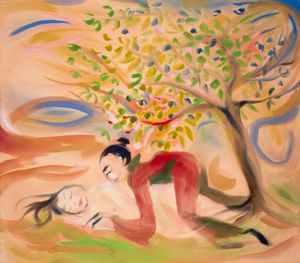 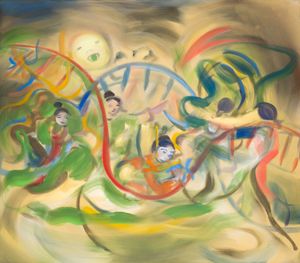 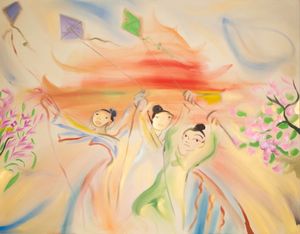 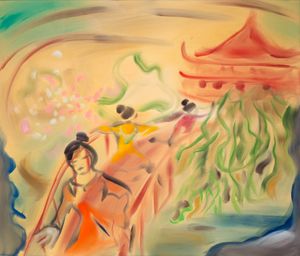 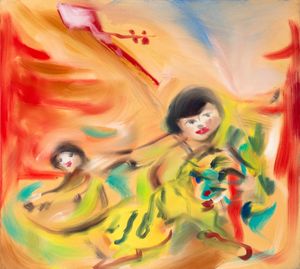 Pilar Corrias is pleased to present Dream of the Red Chamber, a presentation of recent work by Sophie von Hellermann on the occasion of the 2021 edition of Gallery Weekend Beijing. Further developing her unique painting practice inspired by and incorporating classic literatures, Sophie von Hellermann has recently created a number of paintings based upon the story of Dream of the Red Chamber by Cao Xueqin, one of the Four Great Classical Novels, published in 1791.

After presenting a suite of paintings inspired by Shakespeare's A Midsummer Night's Dream in 2020, von Hellermann created another series of paintings, based on her reading Dream of the Red Chamber. When the artist was little, her family often used to talk about the Chinese classic–it was von Hellermann's grandmother's favourite piece of literature. In 2020, the artist re-encountered the book, read a number of different translated versions of it and began to create paintings that illustrate the complex, romantic and fantastical narrative, portraying the various fascinating characters as they struggle with their fates.

The latest paintings, however, do not only unfold according to the story. The series combines the artist's memory and imagination, giving rise to new scenarios and narratives that are, at once, literary and cinematic: the child who is born with the magical stone in his mouth; the protagonist's complex relationship with his many cousins and companions in the large, wealthy, aristocratic family; the spectacular fairy land, and the goddess who governs this world of dream and love; numerous sophisticated, philosophical debates and conversations; and the lives in the powerful, rich, secular families, in stark contrast to lives elsewhere. For the artist, the Dream of the Red Chamber records and represents a time long lost. Since the beginning of the 21st century, China has become ever more powerful in terms of political strength, wealth, and international influence in a post-globalised context. Von Hellermann considers the Dream of the Red Chamber written more than 200 years ago contemporary, as it reflects and foresees rises and falls, fortunate developments and eschatological hazards.

Von Hellermann said: 'I was reading the Dream of the Red Chamber in a couple of translations. I heard about it a lot as a child because my parents read it, and it was my grandmother's favourite book. So, when I re-read the story about the boy born with a stone in his mouth, I did know that story somehow; the imagery was familiar to me. I started painting before finishing the book, dipping in and out now, collecting imagery. It is a little odd that after painting the suite of A Midsummer Night's Dream, now I am in another dream. It is comparable actually: the recent painting of Switching of the Bride, for example, is Shakespearean. Shakespeare makes us understand where we come from, and what the English language and culture are. I think Dream of the RedChamber is its Chinese equivalent, pertaining to a time gone but remembered. Regarding the relationship between literature and painting, it is nice to have somebody else as a facilitator for the paintings.' Favouring loose pigments and water-based acrylic binder, von Hellermann paints remarkably fast and fluidly. The broad and fine brushstrokes change drastically as the water-based material evaporates in the process of painting. 'I enjoy the speed of it, and the fact that it is ephemeral,' said von Hellermann. 'A lot of what I paint disappears. Sometimes a painting becomes shockingly different.'

Sign up to be among the first to know when new exhibitions by Sophie von Hellermann or at Pilar Corrias open.
Sign UpLogin