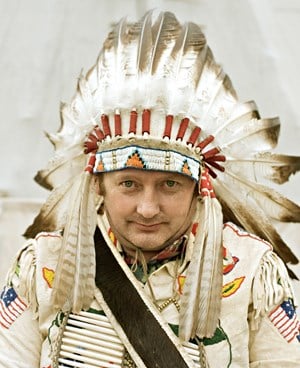 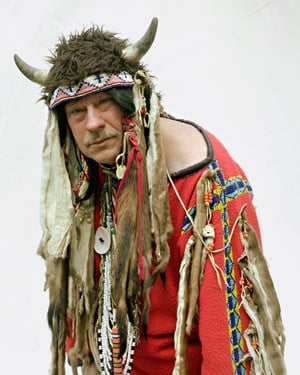 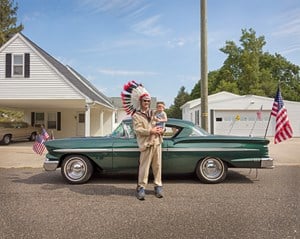 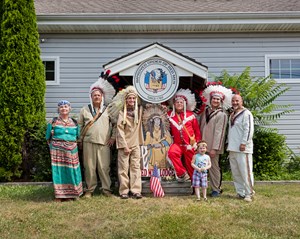 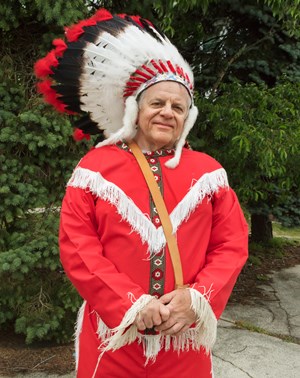 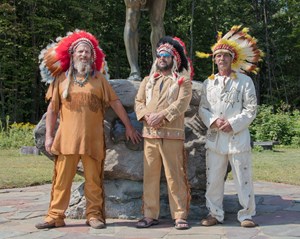 Sprüth Magers is pleased to present Nativist Americans, a solo exhibition by Andrea Robbins and Max Becher. The show features a selection from three photographic series, some of which are exhibited here for the first time. In their practice, Robbins and Becher use photography to examine situations in which one place strongly resembles another distant one, what they have termed ‘the transportation of place’.

This show will include three series: 'German Indians' (1997–1998), 'The Improved Order of Red Men' (2017), and 'Pocahontas Pageant, Laredo, Texas' (2017–2019), which share a theme of the historic use of appropriated Native American culture as costume or disguise. The earliest series of the three, German Indians, presents German hobbyists in Native American dress in the town of Radebeul, near Dresden, the hometown of 19th century writer Karl May who wrote fictionalised and highly popular books featuring Native American characters that are still widely read by German audiences. The participants’ belief in Native Americans as a vanished people is made palpable by their attention to detail and celebration of a highly romanticised image of Native American peoples.

If the German Indians can be seen as attempting to recreate a colonial fantasy born of Karl May’s novels, then the Improved Order of Red Men, in the United States, adopt their dress for symbolic means, using costume as a signifier rather than an ethnographic recreation. The Improved Order of Red Men (I.O.R.M.) are a fraternal order who trace their roots to the Sons of Liberty, who protested British taxation and colonisation by donning Native American costumes to destroy a large cargo of imported tea in 1773 (known as The Boston Tea Party). In private rituals I.O.R.M. members dress in costumes reminiscent of 19th century pageants or historic plays. While membership in the I.O.R.M. has dwindled substantially since its heyday, groups still borrow words from Native Americans languages in their rituals and call their orders by ‘tribal’ names.

The Pocahontas Pageant in Laredo, Texas is the last of its kind and continues because it complements southern debutant culture, with the participants’ formal introduction to both adulthood and elite Laredo society. Part of the month long celebration of George Washington’s birthday, is the elaborate pageant and parade features high school students led by a 'Princes Pocahontas' on horseback. It begins with the 'Princes' receiving the key to the city from the mayor, a tradition started by the Improved Order or Red Men 123 years ago, when they staged a mock attack on the town hall reminiscent of the actions of the Sons of Liberty against British rule. Laredo’s first 'Princes Pocahontas' performed as ceremonial peacekeeper, a role Anglo audiences were familiar with from accounts by John Smith. Smith’s story of Pocahontas, the chief’s daughter securing safe release after his abduction, is an American myth, now questioned by historians. The elaborate and expensive pageant costumes blend the iconography of the Plains Indian with Mexican design motifs, in a blending of both cultures, a natural merger in this Mexican American border town.

All three series take up ideologically fraught material that has not only found a new footing in current political debates, but also more vociferous opponents. Dressing up today in Radebeul is easy given the trans-Atlantic distance from these debates, but the ageing participants of and lack of interest of a younger generation in the I.O.R.M. and the highly guarded culture of the Pocahontas Pageant tell another story.

Ultimately, Robbins and Becher not only attempt to put a face and historic context to the new Nativism in contemporary American politics, but provide an analytic of ways to think these very unique cultural bubbles that play a part in the larger context of American fragility. Furthermore, the artists draw lines from the present moment backward to little known historical practices employed by colonists to usurp control of the land and resources from both British colonisers and foreign landlords. Ironically it was through these rebellious acts perpetrated in disguises borrowed from Native American cultures that colonists sought to distinguish themselves and reject European claims on North American resources. This tradition would later spur on the 19th century 'Nativist American' political movement defined by a new nationalism, perceived external enemies, the over assertion of borders, and anti-immigrant sentiments which are all too familiar in today’s American political climate.

Sign up to be among the first to know when new exhibitions by Andrea Robbins and Max Becher or at Sprüth Magers open.