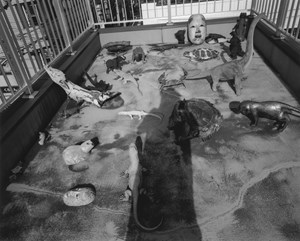 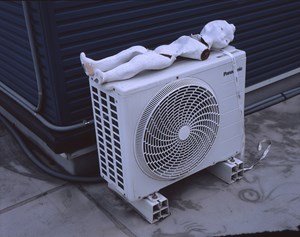 Taka Ishii Gallery is pleased to present Umegaoka Elegy, a solo exhibition of works by Nobuyoshi Araki. This marks the 27th instalment of Araki's solo exhibition at Taka Ishii Gallery, which has been presented on a near-annual basis for over 25 years since the gallery's opening in 1994. The exhibition introduces a selection of approximately 90 new works in colour and monochrome captured on medium-format film.

As is the case with Tokyo Nude (1989), Tokyo Story (1989), and Tokyo Comedy (1997), many of Araki's works feature 'Tokyo' where he himself was born and raised, as a prefix in their titles. For the title of this exhibition however, Araki has selected the town of 'Umegaoka' where he currently works and resides. While the subjects of his works captured in and around his home in Umegaoka consist mainly of dolls, monster figurines, flowers, and monochrome skies, rhythmically inserted into this visual oeuvre are photographs of his wife Yoko as well as Robert Frank who turns 95 years old this year, and notes indicating the years of passing of his late mother and father and his two older brothers who had both died at a young age.

In moments such as the transition from the Showa to the Heisei era, and at the turn of the 20th century, Araki had used his camera to capture the social conditions of pivotal stages in history through 'reproducing' images of women who lived their life to the fullest in these times, the various events and incidents that had occurred, and also the city's ever-changing streetscapes. This year, as Japan approaches the new 'Reiwa' era, the subject of Araki's interest is turned towards himself. Araki, whose physical strength continues to decline day by day, and now often tends to refrain from going out, is becoming increasingly aware of his own impending death. His lens that had once enabled him to bid farewell and pay respect to death of his father, mother, wife Yoko and beloved cat Chiro by means of capturing them as subjects in his photographs, is now pointed at the photographer himself.

The culmination of photographs is a candid reflection of Araki's daily life in which he engages in straightforwardly capturing his preferred and habitual subjects, and thus entrust their respective interpretation to those who view them. We hope this serves as an opportunity for viewers to enjoy the latest works by Araki, who as a photographer turning 79 years old this year, has himself become a metaphoric manifestation of an all-embracing camera.

Sign up to be among the first to know when new exhibitions by Nobuyoshi Araki or at Taka Ishii Gallery open.