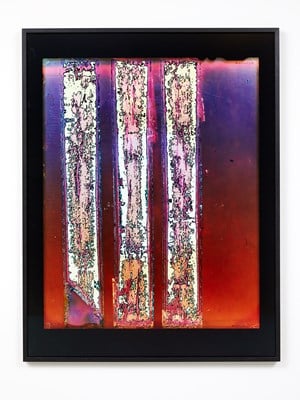 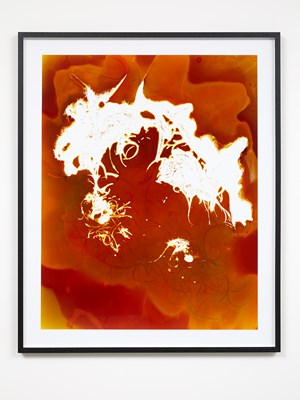 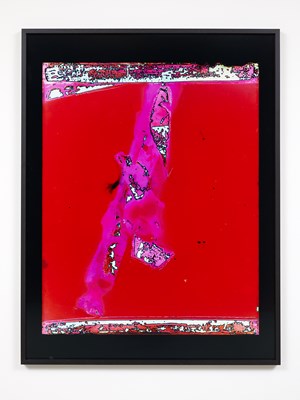 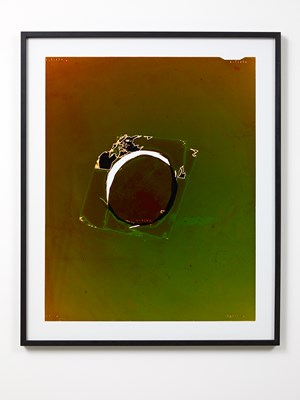 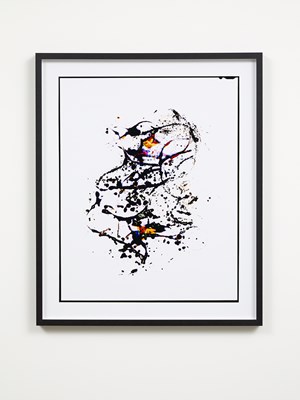 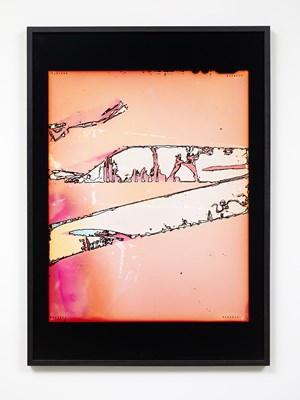 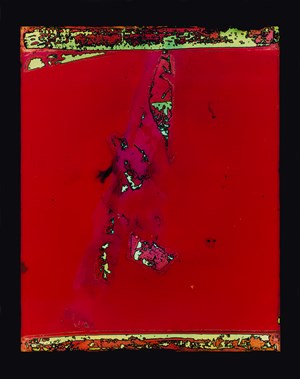 Over the course of the previous decade artist Justine Varga has carved an award winning ouevre from her work with cameraless photography. Pushing the architecture of her image-making into a conceptual terrain more readily associated with sculpture, performance and drawing, Varga's work emphasises themes of embodiment and duration. Drawn on, handled, scratched, spat on and weathered, Varga's images offer an autobiographical witnessing of the world. More than mere residue, her work speaks to physical contact and an accumulative interplay of forces. Heat, action, duration and thought are brought into visceral relations with human bodies, atmospheres and the chemical substrate of the photographic process.

Each of the chromogenic photographs included in Memoire might therefore be read as the enduring reverberation of an act; a choreographed 'photographic skin' that continues the performative and procedural nature of its conception. Left open to the weather, accumulating the touch of hair, fog, spider venom, or being pressed to the forehead before being exchanged by partners over durational and geographic distance, Varga's negatives are each worn and marked within predetermined frames of action and intent. As such, each frame operates as a drawing or test, as provocations that solicit the participation of worldly forces in her image-making. Encircling the mark-making potential of qualities and substances enlisted from her immediate environment, Varga's work can be observed to co-opt the activity of multiple scales of life in the body of a single image. From the microscopic chemical movements of bacteria and body fluids, through to the larger vicissitudes of seasonal volatility and durational passage, her negatives become a form of artistic pact with the world; a diaristic contract that traverses both human and non-human domains.

This method of image-making draws out a parallel notion that has shadowed the photographic image from its earliest inception, that of writing. In her wider oeuvre, Varga returns to the reference point of Talbot's early Photogenic Drawing—his Pencil of Nature—but does so from a vantage point that is informed by subsequent artistic, literary and technological histories. Indeed, while we might find a writerly analogue for Talbot's early photographic enterprise in exercises of taxonomic description, Varga's images, by comparison, arrive in an era that follows the experiments of poet Bernadette Mayer's Memory (1971) and Studying Hunger (1975), in the art-historical wake of Mary Kelly's Postpartum Document (1973-79) and the text-based works of Lee Lozano. An era, in other words, in which the information aesthetics and proceduralism of conceptual art practices have long been prised open and repurposed by artists and writers with other imaginative and subjective agendas.

Varga's work extends from this historical background in a series of inquiries that simultaneously interrogate both medium and meaning. Memoire, then, might be viewed coextensively as both a personal record and return to the memory-life of the photographic image; as a set of actions that push at the expanded potential of the photograph, testing its faith as an interface between self, other and world.

Justine Varga graduated with Honours from the National Art School in Sydney in 2007. In recent years her work has appeared in a number of important public exhibitions. In 2012, her work was selected for Primavera: Young Australian Artists at the Museum of Contemporary Art Australia and exhibited in Flatlands: Photography and Everyday Space at the Art Gallery of New South Wales. In 2015 her photographs featured in Australian Art: Now at the National Gallery of Australia in Canberra and were also showcased at Paris Photo. In 2016, her work was included in Emanations: The Art of the Cameraless Photograph, curated by Geoffrey Batchen for the Govett-Brewster Art Gallery, New Zealand, and also in New Matter: Recent Forms of Photography, curated by Isobel Parker Philip at the Art Gallery of New South Wales in Sydney. Varga was also nominated for the 2016 Shpilman International Prize for Excellence in Photography, an international juried award at the Israel Museum, Jerusalem. In 2017, she was commissioned to mount solo exhibitions at the Australian Centre for Photography in Sydney and Sydney Contemporary, Australasia's premier contemporary art fair, and was shortlisted for the Ramsay Art Prize at the Art Gallery of South Australia in Adelaide. She was also featured in Making a Mark, a film about the next generation of Australian artists that premiered at the Adelaide Film Festival. In 2018, she co-curated Runes: Photography and Decipherment at the Centre for Contemporary Photography in Melbourne. A body of her work featured in the TarraWarra Biannual 2018: From Will to Form, curated by Emily Cormack at the TarraWarra Museum of Art in Victoria, and Performing Drawing at the National Gallery of Australia in Canberra. A major commission for Duo Central Park in Sydney, a new building designed by Foster + Partners in London, was completed last year. In 2019, her photographs will be exhibited in Beyond Place: Australian Contemporary Photography at the Museum of Photographic Arts in San Diego, the United States.

Varga's photographs have regularly won prestigious awards. In 2014, she was the recipient of the Australia Council for the Arts London Studio Residency and was awarded the Museum of Contemporary Art Australia Primavera Veolia Acquisitive Prize. Varga has twice been given the juried Josephine Ulrick & Win Shubert Foundation for the Arts Photography Award, in 2013 and 2016. In 2017, she was the recipient of the Olive Cotton Award for Photographic Portraiture, and completed the Acme Associate Residencies Programme in London, with the support of the Australia Council for the Arts and Arts New South Wales. In 2016, she was commissioned to write an essay on the work of László Moholy-Nagy for Loose Associations, issued by The Photographers' Gallery in London. Varga is frequently invited to give public talks and lectures. Recent speaking engagements include: The National Visual Art Education Conference at the National Gallery of Australia in Canberra; a specialist talk for the exhibition You are Looking at Something You've Never Seen Before at Zabludowicz Collection in London, and a keynote address for the Deus Ex Photos Photomedia Conference in Sydney. Her work has been acquired for the collections of the National Gallery of Australia, Art Gallery of New South Wales, Art Gallery of South Australia, Monash Gallery of Art, Macquarie University, University of Queensland and Artbank, among others, as well as for private collections in Australia, New Zealand, Singapore, Hong Kong, Switzerland and France.

Sign up to be among the first to know when new exhibitions by Justine Varga or at Two Rooms open.