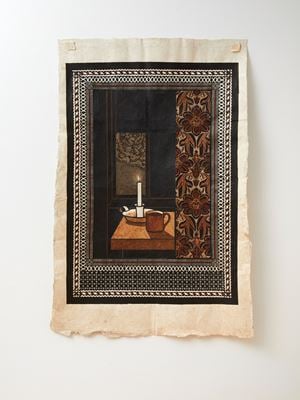 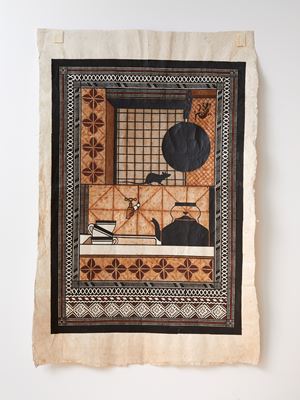 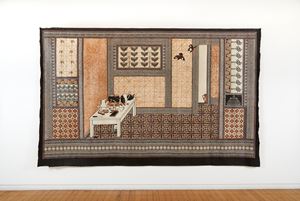 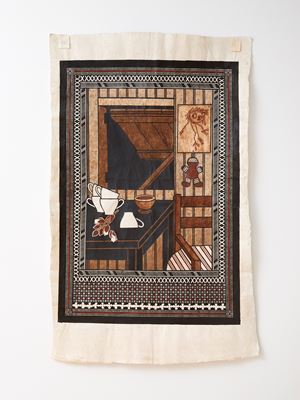 That vase, this table, these objects

Philip Larkin's brief, crestfallen poem 'Home is so sad' concludes with a backward, valedictory glance: 'You can see how it was: / Look at the pictures and the cutlery. / The music in the piano stool. That vase.' Borrowing Larkin's final phrase for its title, Robin White's recent suite of works is similarly introspective in tone, while alert to currents and nuances out in the wider world. Robin recalls, before a recent working-visit to Fiji, listening to a radio news bulletin during which Donald Trump used the phrase: 'We've put it all on the table.' With those words lingering in her mind, she produced the domestic interior That Vase. 'I was thinking how it is that putting all your stuff on a table is the kind of thing you do when you are worried or threatened. You place your things somewhere you can see them,' Robin explains. 'In a window on the other side of the image, I placed a vase (based on the one in Duccio's Annunciation). I was thinking of those things in life we neglect or marginalise. Maybe this represents the spiritual aspect of life set apart from other things?' These objects, that vase.

These works arose out of conversations between Robin and her Fijian friend and collaborator Tamari Cabeikanacea. The title It must be raining in Suva came from something Tamari would say when she was wondering how family members were doing in the distant town. Waiting for Vika (2019) was occasioned by the untimely death of the daughter of Tamari's neighbour—a young woman who was struck by a car while on a shopping excursion. In Robin's sacramental rendering, that tragedy becomes an open window, a tabletop and upside-down cup—something precious spilt. It is an elegiac work, yet one that also embodies the continuity of life, the sustaining domesticity of the kitchen. New life is embodied in a child's drawing pinned to the wall; the stacked cups represent the gathered, grieving family.

In a world characterised both by a constant blizzard of information and by news 'black outs'- -a world in which we simultaneously know too much, and don't know or understand enough— Robin's works propose a moment's clarity and poise—a return to the ordinary things in which the mysteries of human life are quietly, subtly present. In Robin's art, taps drip, tea is poured, cups dry on a bench. Outside it might be raining. If not, it probably will be soon. Darkness gathers. In one work, a black frying pan hanging on the wall becomes a looming black dot.It might be a solar eclipse or the full-stop at the end of the poem. A moment's blindness (or inwardness) in the world of outward things.

What is it that matters more in the end, we are left to wonder: words spoken across a boardroom table in Washington DC, or uttered beside a kitchen table in a remote settlement on a Pacific island? Do our thoughts and deeds lighten or darken this world? Robin's recent paperbark works are a switching on and off of lights, literally and figuratively speaking. In the momentary glare of her artistic gaze, a rat is startled on a windowsill; lizards are entangled halfway up a wall. The tabletop objects in That Vase suggest there were people here—probably until a few seconds ago. 'Home is so sad. It stays as it was left,' by Philip Larkin's summation. 'Shaped to the comfort of the last to go.' In the same spirit, Robin White's art is both a warm embrace and a letting go of the world we inhabit, her vision encompassing both the light in the room and the darkness beyond the shutters.

Sign up to be among the first to know when new exhibitions by Robin White with Tamari Cabeikanacea or at Two Rooms open.