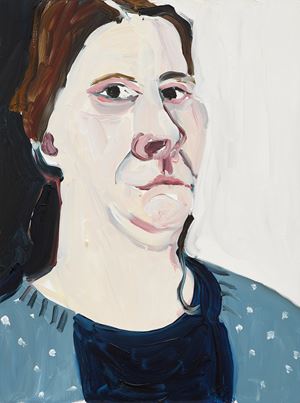 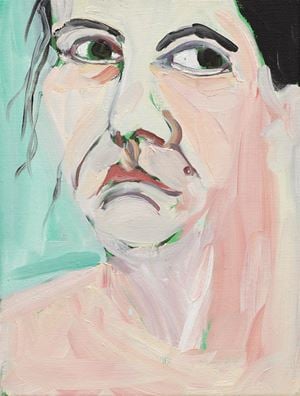 On view at Victoria Miro Mayfair are selected self-portraits from a series begun in January 2018, by the acclaimed British painter Chantal Joffe. Exhibition continues at Wharf Road, featuring large-scale canvases depicting the artist's family and friends.

'I think there are points in painting when there is literally nothing else you can do. You've got you, and you've got paint.'–Chantal Joffe

Chantal Joffe brings great insight and integrity, as well as psychological and emotional force, to figurative painting. On New Year's Day, 2018, the artist set herself the challenge of working on a self-portrait every day for the coming year. This daily practice–through personal lows and highs, in the shifting white light of a prolonged London winter and the savage heat of New York in summer–has resulted in a series of characteristically unflinching works.

On view at Victoria Miro Mayfair are selected portraits from this series. Modest in scale, each is a depiction of the artist–full face or three-quarter view, in her painting clothes–titled with the date of its completion. The seriality of this display is immediately striking. Ordinarily, a single self-portrait, perhaps two, might be shown among a wider body of work. Here, what is true of any single self-portrait–that in embodying their work, the artist invites speculation about their innermost thoughts–is amplified as paintings, ostensibly similar in appearance, are installed throughout the gallery.

Moving between the paintings, one might notice differences of light, shadow, or painterly touch; the minute changes that occur from day to day, as well as less quantifiable shifts of mood or atmosphere. While Joffe has always been doggedly attentive to the visual facts before her; sensitive to, but in the end unwavering in her commitment to the stark reality–physical and emotional–of a person, there is special economy to her self-portraits. Just the artist, a mirror, her materials...Each is a meditation achieved by the most minimal means. Yet there is also a sense of routine to the creation of these works. Humour and self-deprecation play their parts, too, as the artist applies herself again and again to studying the familiar contours of her face, following her own co-ordinates and topography as if she was charting an unfamiliar territory.

Similar but infinitely various, these works offer a rich alternative to self-portraiture's idea of essential truth. In each painting the artist puts forward a face to the world. But in doing so she asks whether we could ever think of ourselves as being the same person we were yesterday, or will be tomorrow. Could there ever be such a thing as a single, definitive self? The relationship to time and selfhood in these works is complex. As much as they are in themselves transient, records of moments past, they are ultimately a declaration–an affirmation–of presence.

Joffe has often talked about her paintings in terms of transitions, those associated with growing and ageing, as well as her attempt to mark a life's milestones. These concerns are especially pronounced in her images of teenagers. The ways in which we inhabit or enact gender, accentuated during times of accelerated transition such as adolescence, are keenly present in a portrait of Herb, the son of a friend, whom Joffe has painted for a number of years, as well as her own daughter, Esme. In Faun (2018), and Esme on the Blue Sofa (2018), Joffe captures them at a poignant threshold, exuding both the vulnerability and coolness of youth.

Together, the works build upon complex narratives about connection, perception and representation. They alert us to the endless nuance of bodily expression; the myriad ways in which we reveal ourselves and communicate emotion, such as happiness, sadness, confidence, doubt or even distraction, whether we like it or not.

Published on the occasion of the exhibition at Victoria Miro Mayfair, a new book, The Front of My Face, features Joffe's recent series of self-portraits in its entirety, accompanied by a new text by writer and critic Olivia Laing.

Sign up to be among the first to know when new exhibitions by Chantal Joffe or at Victoria Miro open.