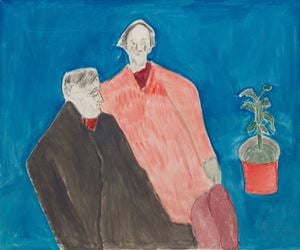 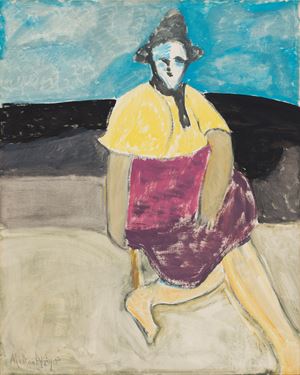 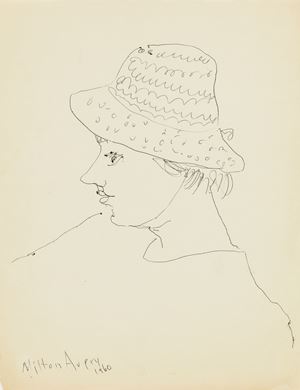 Victoria Miro presents an exhibition of portraits drawn from the last four years of Milton Avery's life. Characterised by economy of touch and luminescence of colour, the works on view see the artist apply a lifetime of experience to cherished subjects and motifs.

Milton Avery (1885–1965) made portraits throughout his career yet, bar a handful of exceptions, did not accept commissions. Instead, he drew and painted what was most dear to him and closest to hand–family and friends, at home or on vacation. As Mark Rothko commented in his memorial address: 'What was Avery's repertoire? His living room, Central Park, his wife Sally, his daughter March...his friends and whatever world strayed through his studio; a domestic, unheroic cast. But from these there have been fashioned great canvases, that far from the casual and transitory implications of the subjects, have always a gripping lyricism, and often achieve the permanence and monumentality of Egypt.'

Shadowed by ill health (he suffered a second major heart attack in October 1960), the latter years of Avery's life saw the artist increasingly confined to his apartment and studio on Central Park West, rarely venturing outside except for occasional walks in Central Park. This is the likely location, greatly simplified to planes of ochre and green, of the self-portrait painting Milton Avery (1961), in which Avery depicts himself in his beret and Breton shirt, poised on a path as if contemplating his mortality.

As his physical world shrank, Avery drew ever more on the fertile and expansive territories of memory and experience. Sally by the Sea (1962) revisits a familiar motif from his career, the beach-goer, completed from an earlier sketch. Throughout his career, Avery's habit was to devote his summers to drawing and making watercolours, which would serve as the basis for the oil paintings he worked on during the winters back in New York–a routine that goes some way in explaining his art's sense of endless summer. His fragile state of health lends additional poignancy to these late works, which often have the air of warm recollections.

Conciseness, so often a mark of an artist's late style, can be aligned here with practical necessity. For Avery, moments of creative intensity were interspersed with periods of illness, during which he was too sick to work. In February 1964, he entered the Montefiore Hospital, where he remained for ten months until his death on 3 January 1965. The year 1963, therefore, is the last full year in which Avery painted, and there is much speculation as to his psychological state and to the meaning of these late works, especially the self-portraits, which may possibly have been a form of catharsis. Paintings such as Avery Feeling Wild (1963) are unusually revealing of an artist so often associated with pastoral and domestic harmony, whose taciturn nature is underlined by his famous dictum–'why talk when you can paint?'.

Lavender Girl and Young Couple, both painted in 1963, depict the Averys' daughter March, also a painter. March Avery married the scholar and photographer Philip G. Cavanaugh in 1954 and Young Couple is imbued with serenity-Philip reading aloud to March at the Averys' Central Park West home and studio. The Averys were immersed in the art and culture of New York. As early as the 1930s, their apartment became a meeting place for young artists, including Mark Rothko and Adolph Gottlieb, as well as writers, musicians and poets. At MacDowell Colony and Yaddo artists' colonies during the 1950s, they worked in the company of writers and poets such as James Baldwin, Howard Moss, Peter Viereck and Sara Henderson Hay. Two Poets (1963), captures this bohemian milieu, its figures, treated as angular shapes, becoming spare and monumental.

That these last years were also filled with light, love and humour, is seen in New Hat (1962), a portrait of Sally who recalled, 'I would appear with a new hat which Milton would greet with gales of laughter. Hurt, I would retreat; harmony would be restored when the hat appeared next day in an enchanting small painting.' It was through Sally's work as a freelance illustrator during the first decades of their marriage that Avery had been able to devote himself to painting full time, and throughout their lives they painted side-by-side. Artist Paints Artist (1962), a portrait of Sally captured while working on a portrait of her husband, is a playful depiction of their creative partnership-a double portrait of sorts. Together, the works reveal Avery's undiminished drive to create despite the delicacy of his health, as well as the enduring strength and deep comfort of familial bonds. As Sally commented: 'We were a family united, united by a passionate love for painting.'

Sign up to be among the first to know when new exhibitions by Milton Avery or at Victoria Miro open.