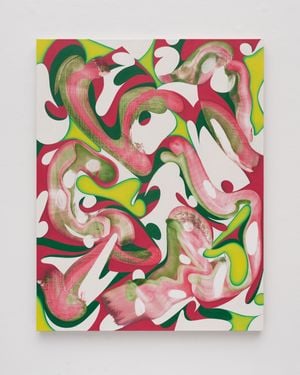 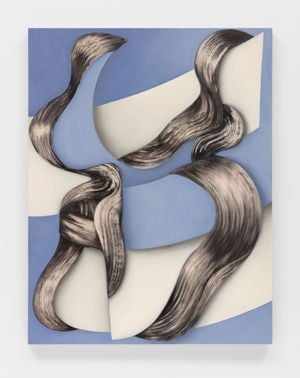 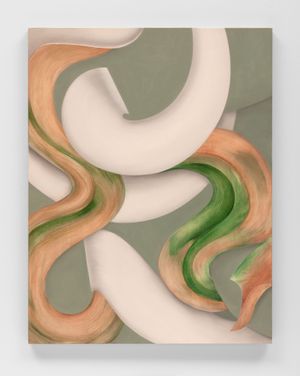 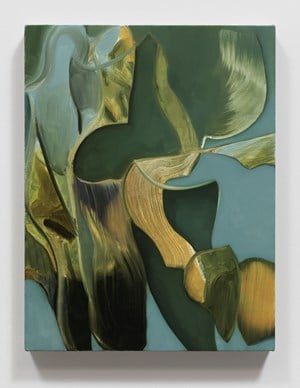 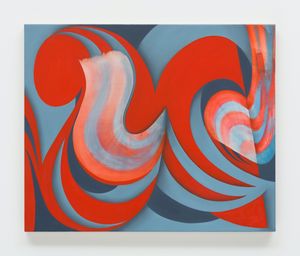 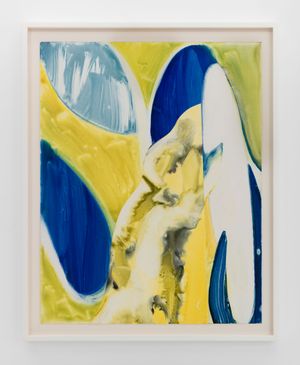 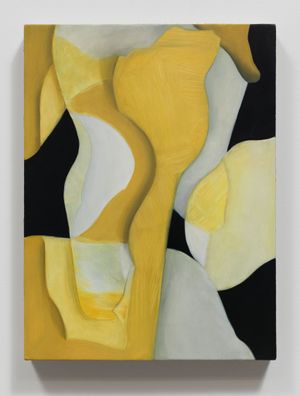 In Slipstream, her fourth solo exhibition with the gallery, American artist Lesley Vance (b. 1977) presents a new group of abstract oil paintings and watercolours in which colour and form acquire a heightened sense of movement and depth. A series of large-scale canvases signal a shift in scale and, with it, an expanded approach to exploring the materiality of colour.

Vance's oeuvre has a temporal dimension, since the artist not only works within the pictorial space but also across time: she often elaborates her constellations of free-flowing lines and loops over the course of months. During this period, an initially active sequence of gestures develops into a matrix of interrelated shapes and, crucially, a vigorous interplay between light and shadow, foreground and background. Taking the conventional definition of 'slipstream' as 'an assisting force that draws something along behind it', Vance's paintings can be said to follow in the slipstream of the streaks and striations left behind in the wake of her initial squeegeed gestures. This foundational and intuitive movement of paint produces marks of varying velocity that act as the catalyst for subsequent gestures and actions. Working without assistants, her compositions are intimately linked to the physical act of painting, and her large-format works bear witness to both the reach, and limits, of the human body. Added to this is the emphasis on colour that becomes – especially in the larger paintings – an almost kinetic force. Lesley Vance not only demonstrates an eye for evocative hues but also the way in which contrasting and complementary shades can evoke an atmosphere, idea or even an art historical reference. The artist's considered use of bright contrasts, bold sweeping lines, simplified organic forms and areas of pure vibrant colour (red, blue, yellow, and green) lend her most recent works an intense visual dynamism.

The tension between foreground and background, as well as the energy that arises from the juxtapositions of lines and colours, alters the viewer's perception of depth and creates an almost dizzying illusion of speed and movement. In Vance's work, the eye is led in multiple directions and surfaces appear to advance, recede and overlap in ways that initially seem logical but ultimately confound the eye. Yet our desire to unravel the process, to pinpoint a visual (or technical) beginning or end, is firmly thwarted. Vance is also a master of light and captures a distinctive form of luminescence without obvious source that, via gleaming highlights or subtle shadows, further bolsters the illusion of depth and motion. And whilst the formal qualities of her canvases and watercolours exude an air of breezy spontaneity, it's also true to say that each work is the product of an intense intellectual and technical exploration – sometimes controlled and at other times wholly improvised and intuitive – of the ever-evolving possibilities of colour and paint. Every image reflects this investigative quest and attests to the skill with which Vance transforms her concrete sources of inspiration – eternally elusive but which can range from everyday objects to poetry, literature and art history – into paintings that, while robustly two-dimensional, are bursting with an irrepressible life of their own.

Sign up to be among the first to know when new exhibitions by Lesley Vance or at Xavier Hufkens open.
Sign UpLogin