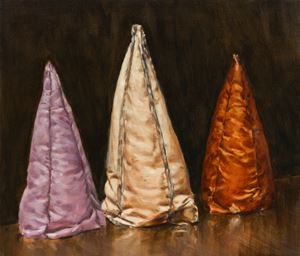 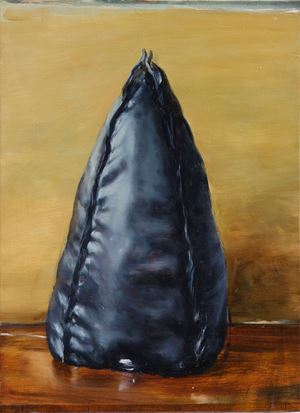 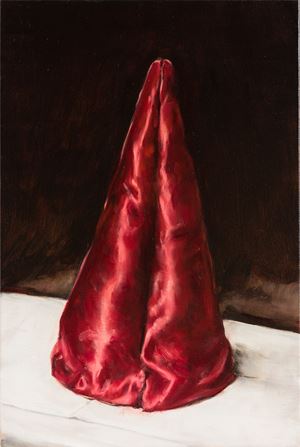 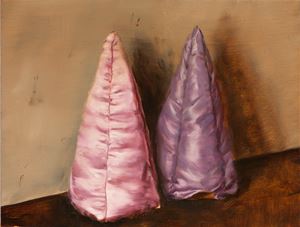 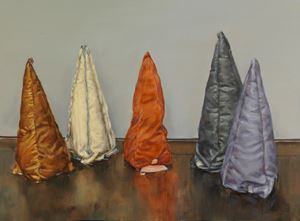 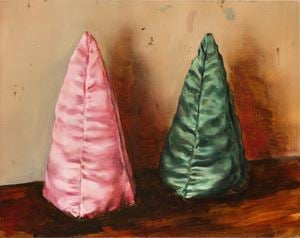 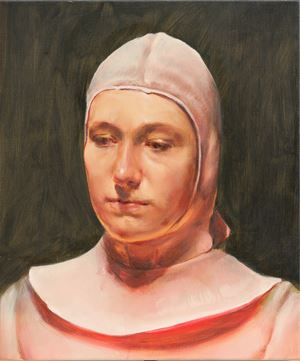 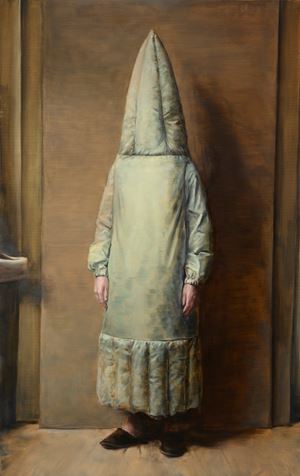 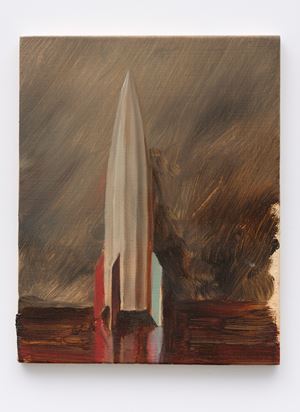 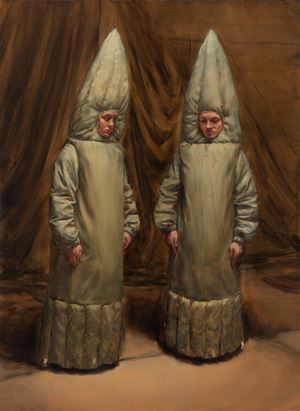 Michaël BorremansWhat Else Could They Do?, 2019Oil on canvas
120 x 88 cm Zeno X Gallery Enquire 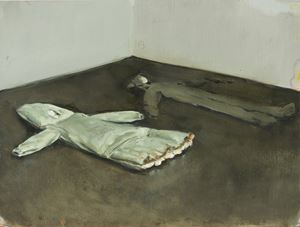 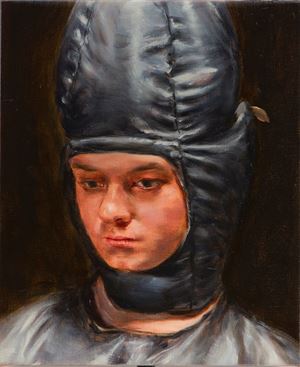 The title of the exhibition refers to the new series of paintings in which satin cones play the leading role. These are sometimes placed alone and sometimes side by side in different constellations. Both the manner of presentation and the choice of satin point to the tradition of Western portrait painting. By projecting the codes of the genre onto the soulless cone figures, a tension arises not only between subject and object, but also between reality and abstraction. The thorough individualisation of the cones also led to two of them being given a real name: The Pope and Dodgy Bob. In The Pope, Borremans refers directly to the portrait of Innocent X by Diego Velázquez, in which the fabric of the robe acts as a pars pro toto for the character in one of the most famous portraits in Western art history.

Further in the exhibition, the colourful cones are confronted with 'portraits' of human figures that emerged in the same period. The shapes of the 'cones' resonate in the costumes in which his models are dressed. These images, too, challenge the expectations of what a portrait is supposed to be. After all, Borremans never paints the human figure as an individual, but always as a type. The portraits are not representations of nature, but point to something artificial, to the image of man that has arisen in our Western culture. Through these generic types he touches upon the fundamental theme of his work: the condition humaine. The result is a set of surprising representations that strike a compromise between portrait and still life, abstraction and concreteness, illusions that only exist in the reality of the painting.

On the occasion of the exhibition Coloured Cones, the new monographic publication The Badger's Song will be published. This catalogue offers an overview of all the works that Michaël Borremans has conceived serially since 2013. There are seven different series, including Black Mould, Fire from the Sun and Girl with Hands. Most of these works have never been published before. Michaël Borremans currently has a duo exhibition with Mark Manders at the 21st Century Museum of Contemporary Art in Kanazawa, Japan. Earlier this year he presented a retrospective at the Rudolfinum in Prague.

His retrospective As Sweet As It Gets travelled in 2014–1205 from BOZAR in Brussels to the Tel Aviv Museum of Contemporary Art and Dallas Museum of Art. The exhibition Eating the Beard opened at Kunstnernes Hus in Oslo before being shown at Kunstverein Stuttgart, Kunsthalle Budapest and Kunsthalle Helsinki. Michaël Borremans has held other solo exhibitions at CAC Málaga, Hara Museum in Tokyo, MCA Denver, Kestner Gesellschaft in Hanover, de Appel Arts Centre in Amsterdam, The Cleveland Museum of Art, Parasol Unit in London, S.M.A.K. in Ghent, Museum für Gegenwartskunst in Basel, Kunsthalle Bremerhaven, and more.

Sign up to be among the first to know when new exhibitions by Michaël Borremans or at Zeno X Gallery open.
Sign UpLogin