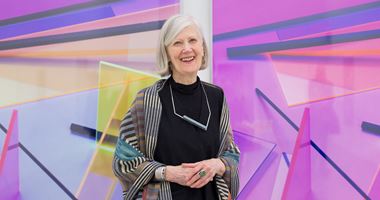 Ocula Conversation Barbara Kasten: Out of the Box Read More

After graduating from the University of Arizona in 1959, Kasten went on to receive her MFA from the California College of Arts and Crafts, Oakland, in 1970. While in California, she studied with Trude Guermonprez, a Bauhaus-trained artist who had previously taught at Black Mountain College, and absorbed the influences of Bauhaus ideas and the California Light and Space movement, evident in her later work. In 1972, Kasten travelled to Poland on a Fulbright-Hays fellowship, where she worked with sculptor Magdalena Abakanowicz.

With a background in painting, Barbara Kasten turned to experiment with photography in the 1970s. These include her cyanotype works such as the 'Photogenic Painting' (1974—1976) series, and oil and crayon works on photo linen including Untitled 78/5 (1978) and Refraction I (1979), which depict photographic abstractions.

Barbara Kasten's iconic 'Construct' series, begun in the early 1980s, are composed through a range of materials—including Plexiglas, mirrors, wire, mesh, and sheet metal—assembled into stage-like settings in her studio. Presented as photographs, the 'Construct' works engage the viewer's sense of perception in the process of transferring the three-dimensional spaces onto the two-dimensional image. In her 2020 conversation with Ocula Magazine, the artist stressed the significance of perception in her work, that 'it is not a photograph of a sculpture ... there is a photograph and there is a sculpture together, but it's about seeing the material differently.'

In her 'Architectural Sites' (1986—1989), Kasten expanded her constructions beyond the studio, working with a professional cinematic lighting crew to transform architectural spaces into bold-coloured abstractions. In the photographic prints such as Architectural Site 8, December 21, 1986 (1986) or Architectural Site 15, October 19, 1987 (1987), the harsh lines and angles, as well as distortions made by mirrors, recall works by Russian Constructivists. Though considered apolitical at the time, Kasten pointed out the subversive nature of her work, saying 'what I found really interesting was what was happening in architecture and how that reflected the fabric of society, because all this architecture was so grandiose.'

Kasten continues to explore abstraction, materiality, and the interplay of light and shadow in her photographic and installation works. 'Studio Constructs', ongoing since 2007, is defined by its comparative lack of colour, while the artist's use of Plexiglas in 'Collision' (2016) allows for an experimentation with transparency and physicality.

Ocula Conversation Barbara Kasten: Out of the Box By Stephanie Bailey, Wolfsburg

With her solo exhibition, Works, now on view at Kunstmuseum Wolfsburg, Barbara Kasten discusses straddling the worlds of photography and contemporary art to explore the possibilities of light and space.

Related Press An Artist Frames Discussions About Design, Doughnuts, and the City of Chicago 6 September 2018, Surface

Barbara Kasten is tough to categorize. She began her career as a painter, but soon switched to making vividly colored abstract photographs. She creates them by arranging mirrors, glass, and other mate

Sign up to be notified when new artworks and exhibitions by Barbara Kasten are added to Ocula.
Sign Up Login