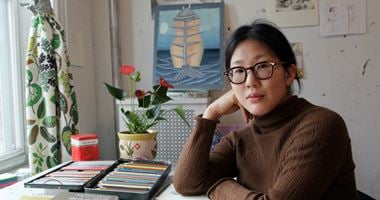 As GaHee Park told Ocula Magazine in 2020, the proliferation of sexual acts and nudity in her work derive partially from her background. Growing up in a conservative Catholic family in Seoul, she was seldom allowed privacy or freedom to explore taboo subjects. Drawing became 'a way of rebelling and asserting myself': of challenging traditional values about not only sex but also sexist ideas restricting women's behaviour.

The often private and idyllic scenes in GaHee Park's paintings regularly incorporate acts of voyeurism. In House Dance (2018), a hand pulls back a curtain to reveal a couple having sex, while in Voyeur (2020), an eye and a finger peek through a hole in the wall to observe a vase of flowers and a pair of copulating snails. As the artist told Metal Magazine, she is drawn 'to the idea of private space in a psychological sense, and I find it interesting to think about different kinds of private spaces that can exist.'

Various animals also frequently play voyeurs in GaHee Park's work. In Every Day Was Yesterday (2017–2018), two dogs wearing protective collars watch the entangled bodies of a couple in the foreground. By contrast, the calico cat in Feast Night (2018) appears disinterested in humans, who kiss as the feline grooms itself on the table.

Also in her 2020 interview with Ocula Magazine, GaHee Park reflected on her experiences of discrimination when she first arrived in the United States for graduate studies at Tyler School of Art in the late 2000s as an influence on the presence of animals in her work. 'Maybe it's more about social taboos, about power dynamics and hierarchies—the values we give to certain people and life forms over others', she told Ocula.

GaHee Park dismantles the boundaries between public and private space in new paintings and drawings on view at Perrotin in New York and Public Art Fund's city-wide project, Art on the Grid.

There is a coolness to the way Park paints her figures, as well as a sculptural attention paid to form and surfaces.

Be among the first to know when new artworks and exhibitions by GaHee Park are added to Ocula.
Sign UpLogin