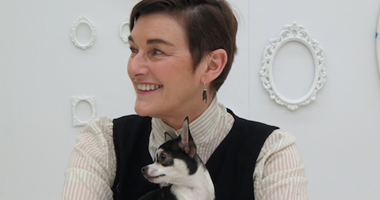 Julia Morison's diverse practice spans a variety of media including painting, photography, sculpture and installation. In each of these modes of expression, Morison investigates the possibilities of dense logic systems to create geometric structures, worlds full of symbols bursting with organic life, or both at the same time. She began her studies at the Wellington Polytechnic School of Design, completing a Diploma in Graphic Design in 1972, and then an Honours degree in Fine Art from the University of Canterbury School of Fine Arts in 1975.

Morison initially came into the public eye in the 1980s and 1990s with highly formal geometric abstract paintings focused on structural methods of interpreting the natural world. During this period, Morison was particularly interested in the number symbolism found in the Jewish doctrine of Kabbalah. Using Kabbalistic numerical systems—particularly the number ten, based on the idea that ten creative forces intervene between the infinite, unknowable G-d and the earthly world—Morison made many works, including Quiddities I–X (1989), a set of ten light boxes in which her gloved hands are visible reaching in to the picture plane, adding and moving elements of the image.

Morison was awarded the Frances Hodgkins Fellowship in 1988 and undertook the Moët & Chandon contemporary art residency in Avize, France in 1990. She continued to live and work in France until her return to Christchurch in 1999 to lecture in painting at the University of Canterbury, a position she held until 2007. In 2005 Morison was made a New Zealand Foundation Art Laureate. A survey exhibition a loop around a loop: Julia Morison, curated by Justin Paton was co-produced by Christchurch and Dunedin Public Art Galleries in 2016. She continues to live and work in Christchurch.

From September 2010 a series of earthquakes devastated Christchurch and the Canterbury region. After these earthquakes, for the first time, Morison turned her hand to public sculpture. 'The earthquake did make it difficult to paint', Morison told Ocula Magazine in 2015. 'Apart from the physical damage and upheaval, the concerns in the work I was in the process of making became totally irrelevant.' Out of the post-earthquake environment, Tree Houses for Swamp Dwellers was commissioned and built. Her first public sculpture effort, the installation sits on the corner of Gloucester and Colombo Streets in Christchurch. It comprises ten hexagonal modular open-air rooms that are able to be moved around the city's various vacant sites. Morison designed the structure to act as a social facilitator. To that end, Tree Houses for Swamp Dwellers has hosted weddings, poetry readings and also acted as a popular lunch spot for nearby workers.

In 2012 Morison was inducted into the Massey University College of Creative Arts Hall of Fame and in 2018 was appointed an Officer of the New Zealand Order of Merit for services to the visual arts. She has exhibited extensively throughout New Zealand and internationally, including being selected for the Sydney Biennale in 1992 and 2010. Her work is held in many New Zealand public gallery collections including the Christchurch Art Gallery Te Puna o Waiwhetu, Auckland Art Gallery Toi o Tamaki and the Museum of New Zealand Te Papa Tongarewa.

Pandemic misery finds company in artworks responding to the Fukushima disaster, the Christchurch earthquake, and other calamities stretching back 3.2 billion years.

Julia Morison didn't need to give much thought to whether or not to accept her latest accolade. The Christchurch artist has been made an Officer of the New Zealand Order of Merit in the New Year Honou

In the downstairs Two Rooms space, two very different sorts of work are presented by Julia Morison, made fifteen years apart. We see From the Book of Shadows, the larger, older, relief, sponge sculp

Two recent contemporaneous exhibitions at Christchurch’s Jonathan Smart Gallery show that even when exploring the visual vocabulary of modernism, it is still perfectly possible to playfully and meaningful allude to tradition - but that’s what postmodernism is all about, a breaking down of hierarchies and chronologies, a rejection of...

Sign up to be notified when new artworks and exhibitions by Julia Morison are added to Ocula.
Sign UpLogin