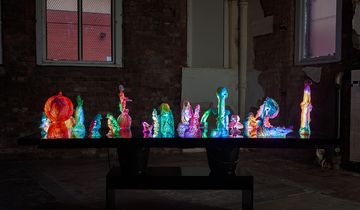 Across a range of fields—including sculpture, installation, performance, and painting—Marco Giordano seeks to recontextualise objects in playful, performative, and collaborative works that allow the viewer to reconsider their indifferent preconceptions of the detritus of everyday life.

In 2020, Marco Giordano presented To Disturb Somnolent Birds at The Modern Institute's Aird's Lane Bricks Space in Glasgow. In this significant solo exhibition, objects cast in colourful resin glowed on a reflective table in an otherwise dark room. Pulsing throughout the space was ambient electronic music, over which a lullaby created in collaboration with vocalist Andrea Silvia Giordano and composer Alessio Dutto was eerily repeated.

The title of the exhibition, To Disturb Somnolent Birds, was in reference to Federico García Lorca's 1928 lecture on cradle songs. However, while Lorca's focus was on the role of fatigue in lullabies, this exhibition leaned towards the more sinister aspects of dreaming. On the topic of Giordano's resin sculptures, Sarah Messerschmidt wrote for Ocula Magazine that these, 'are at once concrete yet abstract bodies, doubly suggesting billows of cosmic dust as if to reinforce the cerebral quality of the subconscious and the ambiguity between dreams and nightmares.'

Alongside his practice as an artist, Marco Giordano is part of the four-person Glasgow-based collective, Thank You Very Much (TYVM). Founded in 2016, the collective hosts performance nights and exhibitions in various venues around Glasgow and Edinburgh. In 2018, TYVM held a residency at The Modern Institute. The residency featured, amongst other events, a series of exhibitions, a dinner, performances, and a text compilation.

Outside of his work with TYVM, Marco Giordano's artworks often contain theatrical and collaborative elements. For Self-Fulfilling Ego (2017)—produced as part of Edinburgh sculpture garden, Jupiter Artland's Temporary commission for Emerging Artists in the Outdoors—the artist created an avenue of misting fountains that, according to Jupiter Artland, 'symbolically offer a blessing to each person who passes along the road.'

Self-Fulfilling Ego was Marco Giordano's first outdoor commission, and took inspiration from The Hundred Fountains of Tivoli's Villa D'Este and the stonework of the Jupiter estate. In addition to the sculptural work, he produced a publication that features drawings created during an open workshop.

Marco Giordano was born in Turin and graduated from Venice's Academy of Fine Arts in 2012. He has had his work presented in solo exhibitions worldwide, at locations including Frutta, Rome (2019); Tarsia, Naples (2019); KaOZ, Palermo (2018); Lily Brooke, London (2018); and Civic Room, Glasgow (2017). He received the Premio i9—Independent Space at ArtVerona in 2018, and lives and works in Glasgow.