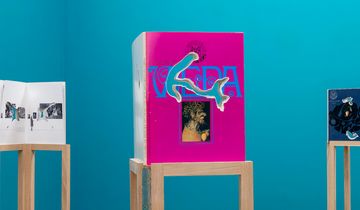 In her extensive research-based practice, Mariana Castillo Deball creates sculptures, installations and performance works that investigate the significance of objects in shaping our understanding of identity and history. Often collaborating with museums and ethnographic collections, Deball explores how archaeology, museology and ethnography are part of a multiplicity of ways an historical object can be interpreted.

'Do ut des' (2009–2019) is an early series in which Mariana Castillo Deball drilled perforations into books, forming symmetrical patterns throughout their pages. The volumes belong to O Mundo dos Museus (The World of Museums), a collection of different museums around the world produced by Brazilian designer Eugênio Hirsch in the 1970s. Through the act of piercing, Deball champions an active participation in the representation of history, rather than a passive reception of an established narrative.

Mariana Castillo Deball's engagement with museological and anthropological practices includes her study of pre-Columbian Mexican iconography. Zoomorph P (2013), a small carved sculpture made of briar wood root, replicates the eponymous 20-tonne Mayan wood carving. You have time to show yourself before other eyes (2014), a group of plaster sculptures, are reproductions of artefacts in the Mesoamerican collection at the Ethnographical Museum of Berlin. For these, Deball revisited a papier-mâché technique developed by the 19th-century archeologist Alfred Maudslay, which produces moulds out of paper. The resulting casts, as Stephanie Bailey wrote in Ocula Magazine, record both the original object in addition to the paper mould's textures, 'constituting an ever-expanding cartography'.

Multiplicity and uncertainty are among the dominant features of Mariana Castillo Deball's work, in resistance to linear narrative and categorisation. Replaying Life's Tape, her 2019 solo exhibition at the Monash University of Art (MUMA), Melbourne, featured prints, objects and scientific display systems depicting fossils from the Ediacara Hills in Australia. The Ediacaran biota, the findings of which gave rise to the naming of an ancient geological era, provided the basis for Deball's consideration and contestation of time in relation to site and history.

Representing lesser-known figures from history, Mariana Castillo Deball's current solo exhibition Between making and knowing something at Modern Art Oxford revolves around the stories of female anthropologists and indigenous storytellers. Through a kaleidoscopic installation containing pottery, textiles and photographs, as well as replicas of historical artefacts, Deball interrogates the way cultural institutions such as museums influence our construction of the world by omitting certain subjects.

Mariana Castillo Deball's work has been included in such international art exhibitions as the 54th Venice Biennale (2011); documenta 13, Kassel (2012); 8th Berlin Biennale of Contemporary Art (2014); Sharjah Biennale 13, U.A.E., and documenta 14, Athens (both 2017). Uncomfortable Objects, a monograph and artist's book, was published in 2012.

Read More Ocula News Which Artists Are Showing at Venice Biennale 2022? Venice, 17 December 2021 Australia is the latest country to confirm the artist and curator who will present work at the world's most famous biennial.