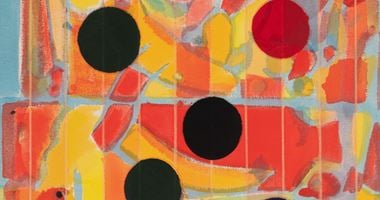 Matt Connors's paintings are fundamentally an exploration of visual hierarchies—an ongoing push and pull between foreground and background, past and present, focus and periphery. His visual language often alludes to the modernist canon in its colour schemes and compositional devices, while remaining distinctly contemporary through its self-reference.

In 1995, Matt Connors received his BFA from Bennington College, a school known for its emphasis on formalism and whose alumni includes artists like Helen Frankenthaler, Paul Feeley, and Kenneth Noland. Connors' ongoing methods particularly echo Frankenthaler's. In both cases, thin layers of watery paint absorb into the fibres of canvas. However, Connors' paintings have a much more geometric, urban bent than Frankenthaler's ethereal work.

In First Stack (2016), for example, asymmetrical rectangles surround a perfect circle. Small dabs of paint sit opaque atop the translucent washes, simultaneously emphasising depth while reaffirming the painting's two-dimensionality. In this tension between illusion and materiality, Matt Connors' work contains both emotive power, developed through a refined sense of composition, and conceptual intrigue in its interrogation of the painting as a construction.

Much of Matt Connors' work, either obliquely or directly, references the history of painting—particularly minimalism and abstraction. A number of his paintings combine the visual language of Josef Albers with a much more expressive painting style. In Hocket (2017), Albers' famously flat exploration of plane and colour is injected with gestural brushstrokes full of energy. In both First Stack and Hocket, Connors utilises a more saturated palette than that of the painters he seems to reference. This choice appears to imbue the images with a vitality not previously present, emphasising a sense of revitalisation of these art-historical conversations. Making Albers' famous motif distinctly his own, Connors draws on the past to parse out the possibilities of a 21st-century understanding of painting.

Connors has often extended his work beyond the canvas, producing installations as well as artist books that aim to push the materiality of painting even further beyond the canvas. In his exhibition Matt Connors: Complaints III at Cherry and Martin in Los Angeles (2014), he painted strips of yellow, blue, orange and black along the vertical seams at which one wall meets another. In this work, the artist yet again maintained painting's art historical lineage; the walls are reminiscent of Jo Baer's canvases, for example, where a thin strip of colour frames an otherwise blank picture plane.

Connors reflects the formalist leanings of his undergraduate education, investigating and expanding the Greenbergian values of two-dimensionality, rectangularity, paint and an overall self-aware (rather than illusory) mode. In works such as Hocket, Connors seems to uphold these values. However, in his installation of painted strips for Complaints III, Connors allows his practice to enter painting in the expanded field, opening up a space beyond Greenberg's rigorous formalism while still respecting its argument.

Matt Connors received his MFA from Yale in 2006. He lives and works in New York.

During an online search for Lawrence Durrell's writing I found this passage in a review, "Durrell's ideal of the novel is one of haute cuisine with great quantities of pepper and garlic" (Patrick Parr

Featuring multiple works by 17 artists in different media – from soap and wax to ink and synthetic polymer, and good old fashioned oil on canvas – _The Forever Now: Contemporary Painting in an Atemp

In concurrence with the exhibition Swap, on view from 6 March to 3 April 2021 at Xavier Hufkens, Brussels. Filmed and edited by Jason Evans.

What does a director of documentaries learn from a painter, and vice versa? Does it influence how they think about or make their own work? Matt Wolf, one of Filmmaker Magazine's '25 New Faces of Indep

Be among the first to know when new artworks and exhibitions by Matt Connors are added to Ocula.
Sign Up Login