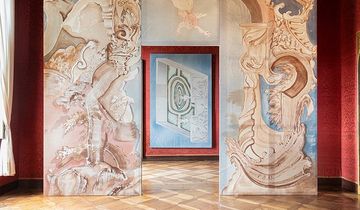 Working across various mediums including sculpture, printmaking, ceramics and painting, Matthew Lutz-Kinoy’s allegiance is not fixed to a single medium but depends on their shared developments in form and a simultaneity in practice.

Embracing the spirit of collaboration as a means to expand knowledge and skills, the breadth of techniques and references used across his practice are the result of many collaborative ventures. Where his ceramics are influenced by working with artists in Europe and Brazil, his large-scale paintings unearth his fascination with the refined, sophisticated and carnal painting style of the 18th century.

At the core of Lutz-Kinoy’s practice is performance. Influenced by histories of queer and collaborative practice as well as his background in theatre and choreography, his live work explores the interplay of narratives that are created and constructed between individuals and social spaces.

Constantly reflecting on his own positionality as an artist, Lutz-Kinoy places himself at the core of his practice–enabling him to manipulate and direct, whilst simultaneously undermining his own role as artist within the production of his work.

His work has been also featured at the group shows such as; Eckhaus Latta: Possessed, Whitney Museum of American Art, New York (2018); Welt ohne Außen. Immersive Spaces since the 1960s, Berliner Festspiele, Berlin (2018); Seasick in Paradise, Depart Foundation, Los Angeles (2017); Neither., Mendes Wood DM, Brussels (2017); The Discovery of a Leak in the Roof of Marcel Breuer’s Wellfleet Summer Cottage on the Morning of September 16, 1984, Off Vendome, New York (2016).