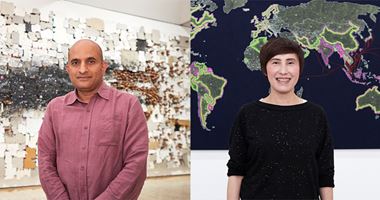 NS Harsha is celebrated for his paintings, site-specific installations and sculptures that navigate the tensions between the local and global, the traditional and contemporary, and the individual and collective. Drawing on a diversity of traditions including comic books and Indian miniature painting, as well as art history and pop culture, his works are recognised for their attention to detail, use of flat spaces and fine brushwork. Working through a local context, Harsha addresses shared contemporary challenges that arise from global modernisation.

Through his combination of discordant imagery and current events, Harsha questions the binaries of 'local' and 'global', and 'traditional' and 'contemporary'. For example, the two works Mooing Here and Now and Only Way is through Milking Way (both 2014) were both inspired by the artist's visits to dairy farms near his hometown of Mysore, India, and in Germany, where he observed the local farming industries' ready adaptation of modern technology. In Mooing Here, rows of figures against a blue-grey backdrop utilise technology in various ways to milk the cows, while the figures in Only Way milk solely by hand. The surprising appearance of elephants in both paintings further references a local incident in which two wild elephants killed a man and several cows in Mysore in 2011. In another painting titled Showstoppers at Cosmic Data Processing Centre (2015), rows of sari-clad women investigate the sky using telescopes. The repetitive arrangement is intermittently interrupted by other women milking cows. Like Mooing Here and Only Way, this incongruous pictorial cohabitation was also inspired by actual news; at the time, NASA had begun to employ rural workers in India to assist with data-collecting. According to the artist, such events are not merely locally specific but 'reveal today's global human condition.'

This attention to the local and global also translates into an inquiry into the individual and collective. In the installation Sky Gazers (2010), created for that year's Liverpool Biennial, a crowd of painted figures on the floor gazed up towards a mirror on the ceiling. When the audience entered the installation and looked up, they found that their reflection became a part of the faces below. On the other hand, Come Give Us a Speech (2008), a large, six-panel painting produced for the National Museum Cardiff, depicts hundreds of figures seated in an orderly manner. Directly facing the viewer, the many figures are represented with references to popular culture (Batman and Superman) and to Western art history (Duchamp holding his 'fountain'), highlighting their individuality.

In 2018, Harsha united his longstanding interests in the cosmos and consumerism in Reclaiming the inner space, a large-scale installation created for the 21st Biennale of Sydney. Spanning an entire wall of the exhibition space, the installation consisted of more than 4,000 components, including unfolded cardboard packaging overtop several mirrors. To denote the stars, Harsha splattered black paint over the cardboard, while around 900 hand-carved wooden elephants were buried between the layers of the cardboard and mirror. The work owes its conception in part to the rise of supermarkets in Mysore. In an interview with Ocula Magazine in 2018, Harsha referred to his enthralment with the supermarkets and their influx of new brands and boxes presented, a phenomenon he referred to as generating 'retinal competition'. Harsha stated he was particularly absorbed by the parallel between the dark spaces inside packaging cartons and the cosmos—the vast universe is surprisingly near us. As he says, 'we assume dark cosmos to be far away when it is just around us, in different shapes and sizes.' When the elephants rise out of this rupture in the gallery wall, their presence not only alludes to their significance in Indian culture but also to their association with the natural world, which bears the brunt of human interventions.

With India Art Fair's return this spring, Ocula Magazine presents the exhibitions to see in New Delhi, Mumbai, and Kolkata.

Prior to the ensuing conversation, Harsha and Chung presented a précis of their work with Chung performing an excerpt of her scripted lecture performance, for which she poetically narrates her family history of displacement fused with historical events and personal moments.

Vadehra Art Gallery director Roshini Vadehra shares her thoughts on collecting in India alongside a selection of her favourite works on Ocula.

Read More Related Press India Art Fair 2017: All the Flowers Are for Everyone 10 February 2017, OPEN Magazine

The glory of India Art Fair is that everyone can find a piece of work that speaks to them.

Be among the first to know when new artworks and exhibitions by NS Harsha are added to Ocula.
Sign Up Login