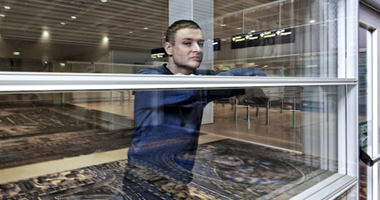 Simon Denny's installations employ an assortment of materials, including text, corporate logos, graphic design, photographs, and parts of machinery, to interrogate the complex and interrelated structures of technology and surveillance in the contemporary world. From recent technological innovations to data extraction and distribution, Denny's works explore the role of technology in shaping governmental organisations, culture, and the economy.

All You Need is Data (2013), an installation of 89 inkjet-printed canvases shown at a solo exhibition of the same name at Petzel Gallery, New York, reflected Simon Denny's longstanding engagement with technology and its culture. Each canvas, designed to evoke the interface of Apple's iOS, feature assemblages of images and transcriptions drawn from footage of the 2012 Digital-Life-Design (DLD) conference. The DLD, founded in Munich in 2005, is a prestigious, invitation-only event that annually brings together leading figures in the fields of technology, design, art, science, and politics. In his visual summary of key moments from the event, Denny offered a glimpse into the highly specialised—and exclusive—world of technology and its ideals.

In The Personal Effects of Kim Dotcom, also from 2013, Simon Denny uses both canvas-based and sculptural installations to explore the notions of privacy and ownership in relation to data. As the title suggests, the project was inspired by the downfall of Kim Dotcom, the founder of the now-defunct file-sharing service Megaupload, whose mansion was raided by New Zealand police in relation to alleged of copyright infringement, money laundering, and racketeering in 2012. In the work, Denny recreates tangible and intangible possessions, such bank accounts, luxury cars, and artworks, to serve as substitutes for the actual goods that once belonged to Dotcom.

The Personal Effects has been exhibited in Denny's solo exhibitions at different venues, including the Museum moderner Kunst Stiftung Ludwig Wien, Vienna (2013); Firstsite, Colchester (2014); Adam Art Gallery, Wellington (2014); and MoMA PS1, New York (2015). Denny told Ocula Magazine in 2014 that he incorporated locally sourced materials into each iteration of the work, creating a 'distinctly "low-res" version' of each original object as a metaphor for the second-hand files that were circulated on Megaupload.

In 2015, Simon Denny explored the relationship between hacker culture and the commercial sector in Products for Organising, his solo exhibition at the Serpentine Gallery in London. Emerging out of his collaboration with artist Matt Goerzen were glass vitrines containing technological objects and everyday items that chart the history of hacking and its influence on contemporary corporate culture. In Formalised Org Chart/Architectural Model: GCHQ 3 Agile/Holacracy Workspace and Zappos 1 (2015), Denny also used corporate logos, slogans, and jargon to examine the management practices employed by commercial tech companies.

Discussing Products for Organising and Secret Power in his 2016 interview with Ocula Magazine, Denny said he is ultimately 'interested in reflecting a wide spectrum of different frameworks of media and knowledge' that shape the structures of corporate and security organisations.

Simon Denny's practice has expanded to examine blockchain technology, a digital record-keeping system that has grown in popularity over recent years. In his 2016 solo exhibition Blockchain Future States at Petzel, Denny investigated the use of blockchain technology by three different companies—Ethereum, 21 Inc., and Digital Asset—in installations aided by board games, characters from the Japanese manga and game franchise Pokemon, and custom-made globes, among other items.

In his solo exhibition Mine at Hobart's Museum of Old and New Art (MoNA) in 2019, Denny addressed different modes of environmental, political, and technological extraction. Among the works on view was Extractor, a functional board game inspired by the 1960s Australian farming game Squatter—unlike its original, however, Extractor players had to farm data. Mine was also accompanied by O, a device that collected the visitors' data as they navigated the exhibition, alerting them to the exploitative potential of data-mining systems. Denny further explored systems of data extraction when the show travelled to Kunstsammlung Nordrhein-Westfalen, Düsseldorf, in 2020, and Petzel hosted his solo exhibition, Simon Denny: Mine, in 2021.

Simon Denny has also addressed the environmental impacts of blockchain technology and NFT's in works such as Mine Offset: Ethereum Kryptowährung Mining-Rig (2021). The work is Denny's first NFT artwork, and sold for US $50,000 on NFT marketplace SuperRare. Four more in the series are to come, which will be followed by the artist's promise to retire a real-world mining rig used for blockchain transactions.

When the average price of an NFT plummeted from four thousand U.S. dollars in February to just over twelve hundred dollars in April, Bloomberg was quick to ask if the NFT 'fad' was over.

It is a matter of both awe and horror to contemplate Australia's larger mining sites: vast wounds in the earth that are largely automated and seemingly inexorable in their gouging power. In Simon Denn

Now in its seventh year, Dark Mofo transforms Hobart into a red-hued spectacle of art, food and music. In addition to new Mona exhibitions Mine by Simon Denny, Siloam, Gorillas in Our Midst, and K

From our vantage point in 2016, it seems a little bizarre that Simon Denny never made it into Artspace’s annual new artist show when he was kicking off his career in Auckland. Now based in Berlin, Denny has become New Zealand’s most successful contemporary artist. If you had to sum it up, you could say his work interrogates the...

Few major exhibitions in recent memory have generated anything like the sort of intensely polarized response that greeted the recently concluded 9th Berlin Biennale, curated by the New York-based DIS, an increasingly notorious group of Gen X and Y “creatives” with close ties to the fashion and advertising industries. A recent publicity...

Sign up to be notified when new artworks and exhibitions by Simon Denny are added to Ocula.
Sign UpLogin