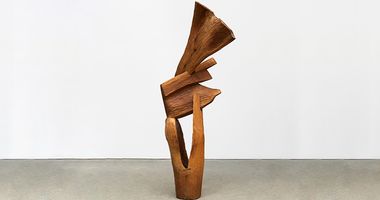 Largely under-recognised, Mosley's contributions to American post-war abstraction have recently been reconsidered, and the artist has received several prominent commissions and exhibitions in the United States.

It was in the mid-1950s, while earning a degree in Journalism at the University of Pittsburgh, that Mosley was initially inspired to start making sculptures. The artist had discovered African dance sculpture in a humanities class and seen the work of Alberto Giacometti on a spontaneous trip to the Carnegie Museum of Art. He had also coveted the Scandinavian furniture on display at a local department store, later becoming acquainted with the work of designers Knoll and Charles and Ray Eames.

Mosley was drawn to the organic, curvaceous nature of such creations, explaining, 'The wood looked carved, rather than mass-produced furniture... It was a way of living with art. They wanted a fortune for those pieces, so instead I thought, "I can make that."'

Thaddeus Mosley's typical routine involves sourcing felled trees from sawmills in Pittsburgh before intensely working on them in his studio, carefully and repeatedly with a mallet, chisel, and traditional joinery techniques. Wooden elements are then interlocked into each other, and sometimes embedded with metal objects, linking them with the region's industrial past.

On their instantly recognisable form, poet Ed Roberson has noted, 'His works are abstractions of actual shapes in time: the limbs of a tree, a chevron, a bird... He makes present a negative space, articulated into the sculpture.' In The New York Times, Jillian Steinhauer has elucidated how Mosley's sculptures 'embrace and transcend their material... Mosley creates objects that feel natural yet mysterious, like handmade totems embedded with metaphysical knowledge.'

Having been raised in a family of musicians, Mosley has compared his improvisational technique to the spontaneity of Jazz, and has called his work 'animated sculpture'. He once said, 'I use different widths and depths of gouge to make different marks. Shadows are the means by which one can appreciate the rhythms of chisel marks.' Titling is important to Mosley, and works such as Opposing Parallels – Blues Up and Down for G. Ammons and S. Stitt (2015) are named after the legendary Black American saxophonists Gene Ammons and Sonny Stitt.

One of his first curatorial supports was Leon Arkus, then Director of the Carnegie Museum of Art, who gave the artist his first survey in 1968 at the museum at a time when Mosley's work didn't fit with the leading movements of Conceptualism, Minimalism, and Pop Art. However, Mosley was skeptical of the resulting commercial interest, declining offers for gallery representation. Mosley split his time working in the studio and for the U.S. Postal Service for exactly four decades before retiring, often sculpting through the night.

His recent curatorial reconsideration has placed him amongst many Black artists who only received due attention in later life, including Martin Puryear, Mary Lee Bendolph, Clementine Hunter, and Thornton Dial. 'Largely promoted by a community of Black writers, artists, and musicians, Mosley's work more than holds its own with his celebrated peers,' critic John Yau noted in Hyperallergic, 'He did not need the art world's approval to keep going, but the art world certainly needs him.'

In 2020, Mosley opened his first exhibition with Karma, his New York gallery. The critically acclaimed show was accompanied by a comprehensive catalogue, featuring contributions from Ingrid Schaffner, Sam Gilliam, Brett Littman, Jessica Bell Brown, and Ed Roberson, among others. In 2021, Mosley will receive a solo exhibition at the Baltimore Museum of Art, Maryland, his first solo museum exhibition in over 10 years.

At 95 years of age, self-taught sculptor Thaddeus Mosley is soon to receive a prestigious exhibition at the Baltimore Museum. Titled 'Forest', it will be his first solo museum exhibition in over 10 years.

Sign up to be notified when new artworks and exhibitions by Thaddeus Mosley are added to Ocula.
Sign UpLogin