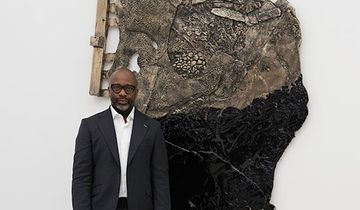 Theaster Gates is an American conceptual artist who works at the intersection of urban planning, object-making and performance. He was born in Chicago, where he still lives and works.

Much of Gates' work is characterised by the use of discarded everyday materials deeply rooted in African American history and culture, such as tar, fire hoses and shoeshine stands. In his iconic 'Civil Tapestry' series, the artist sourced strips of decommissioned fire hoses from his neighbourhood in Chicago and composed them into abstract paintings. These works allude to the fire hoses used to subdue protestors who were marching as part of the ongoing struggles for African American civil rights during the 1963 Children's Crusade civil rights march in Birmingham, Alabama.

Gates is committed to blurring the lines between art and community activism. He founded Rebuild Foundation—a non-profit organisation focused on culturally driven redevelopment and affordable space initiatives in under-resourced communities. The Dorchester Art + Housing Collaborative (DA+HC) and the Stony Island Arts Bank are the most ambitious and celebrated among the projects initiated and run by the foundation. Having achieved enormous impact rehabilitating the long-downtrodden neighbourhoods on Chicago's South Side, these projects established Gates as one of the most fast-rising stars in the international art world.

For DA+HC, Gates restored dilapidated buildings and transformed them into alternative cultural institutions, houses and meeting spaces. In 2013, Gates convinced the city of Chicago to sell him the Stony Island Trust & Savings Bank Building, days before its scheduled demolition, in exchange for a commitment to reactivate the space with art and culture. Serving as 'a repository for African American culture', as Gates described in a press release, the building now houses a precious archive of books, vinyl records and artefacts representing the legacy of the local community. Both projects are part of what the artist described to Art in America as a 'circular ecological system', since they are financed by the sale of artworks created with the raw materials salvaged from the derelict architectures.

Gates' socially-engaged practice is fundamental to his oeuvre. In an interview with Ocula Magazine in 2017, Gates reflected, 'The silos between art and the social are contrived. ... The work I do is one work, one impulse, one imperative, one permission, different forms. It is always about affect, intention and aesthetics.' He has received numerous awards, including the Nasher Prize (2018), the Kurt Schwitters Prize (2017) and Artes Mundi 6 (2015).

View All (15)
Ocula Feature The 5th Aichi Triennale Is a Reminder to Keep Living By Sujin Jung, Aichi

The 2022 Aichi Triennale celebrates resilience in the face of precarity and invites viewers to imagine life beyond the logic of survival.

In Cleveland, the second, pandemic-inflected edition of FRONT International asks: can art can help us heal?

A number of stand-out exhibitions have opened across London.

View All (24)
Related Press 8 Must-See Exhibitions This Week, From Toronto to São Paulo and Beyond 3 February 2020, Surface

Below you'll find a fun mix of museum and gallery shows, performances, and film screenings taking place over the next few months in the greater Los Angeles area. We know how hard it is to keep track o

Be among the first to know when new artworks and exhibitions by Theaster Gates are added to Ocula.
Sign Up Login