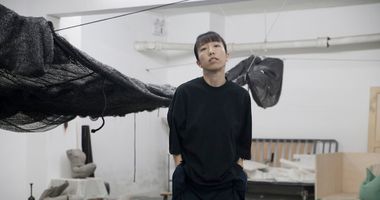 Yu Ji lives and works in Shanghai. She studied sculpture at Shanghai University, graduating with an MFA in 2011. In 2008, Yu Ji co-founded AM Art Space, an artist-led space and studio-residency programme in Shanghai. One of her earliest sculptures, Nothing about human being (2007), cast a selection of used bars of soap in plaster (hair and all).

Yu Ji's practice is primarily made up of sculpture and installation, and to a lesser extent, video and performance. Themes of materiality, presence and absence, forces of nature, and the relationship between the body and place are at the heart of her sculptural work.

Working with materials like concrete, stone, iron, rebar, and soap, Yu Ji's sculptures have a weight to them. However, this is permeated by a sense of balance, as one element is reliant upon another: towering pillars are rooted in rubble and soil, and heavy concrete forms are precariously held against a wall by rusted metal brackets.

There is often a site-specific reference in these materials, as Yu Ji spends extended periods gathering discarded materials from construction sites and abandoned places in the various locations she passes through.

Themes of the body run throughout Yu Ji's work. Her 'Flesh in Stone' (2012–ongoing) series presents concrete casts of fragmented body parts. The anatomical forms create a sense of weight, framed by iron brackets and rebar; yet in the absence of complete forms, there is also a sense of a ghostly presence.

Acknowledgment of the body is also present in the sheer physical effort required to produce these works. As Yu Ji said, the 'body has always been my most direct instrument; I am a manual worker.'

Other series play on the relationship between material, weight, and perception. In 'Ta Jama' (2012–2020), Yu Ji creates the illusion of natural rock from building materials. In 'Green Hair Monster' (2016), stones fashioned from concrete are covered with green moss, resin, and the artist's own hair, dyed green to resemble seaweed.

Yu Ji also experiments in video and performance art. These artworks present the physicality of the materials, the exertion of force in the making process, and the natural forces exerted by the body. For her collaborative performance Deep in the Cloud (2013) with Yan Jun at Art Space Shanghai, Yu Ji threw bags of dry cement, sending dust particles into the air across the entire room. Meanwhile, Yan's collection of upward-facing speakers suspended the particles in the air using soundwaves.

Yu Ji was shortlisted for the Hugo Boss Asia Art Award for Emerging Asian Artists in 2017. For the award, she presented a selection of her work at the Rockbund Art Museum, Shanghai. A central work in this show was Etudes-Lento IV (2017), a chandelier-like arrangement of rusty iron chains suspended from the ceiling and oozing with a coagulated pine resin. A sense of organic growth emanates from the combination of dripping resin and rusted metal—a motif that has continued throughout her work.

Yu Ji's work has also been featured in several international biennials, including the 58th Venice Biennale (2019), the 11th Gwangju Biennale, and the 11th Shanghai Bienniale (both 2016). 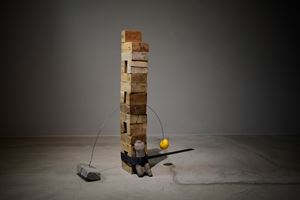 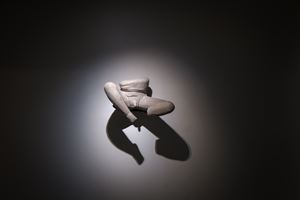 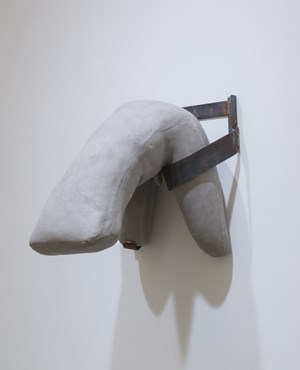 We seek to tap into subterranean and imperceptible forces, perceptional edges, hibernating conversations and interrupted journeys, as it leaps into heretical historical detours and speculative geographies

In late June, the four finalists for the Hugo Boss Asia Art Award 2017 were announced. The artists—Li Ming, Tao Hui, Yu Ji and Robert Zhao Renhui—were chosen from a pool of over 30 nominees for thei

Dedicated to the support of emerging artists from Greater China and Southeast Asia, the biennial Hugo Boss Asia Art Award was established in 2013 and is now in its third iteration. The Award aims to c

This past June, Beijing’s Ullens Center for Contemporary Art (UCCA) presented a major exhibition of the work of Robert Rauschenberg, pairing his 1/4 Mile or 2 Furlong Piece (1981–98) with work he made during the 1980s in and about China. Concurrent with the exhibition’s opening, UCCA invited students of Chinese artist Qiu Zhijie...

The opening ceremony of the 2016 Gwangju Biennale, Asia's oldest contemporary art biennale, is set to kick off in the southwest city of Gwangju next week, the festival's foundation said Friday. During the ceremony, set to start at the plaza in front of the Gwangju Biennale Exhibition Halo at 6:40 p.m. Thursday, Park Yang-woo, chief of...

Sign up to be notified when new artworks and exhibitions by Yu Ji are added to Ocula.
Sign UpLogin