A new venue is being sought for the work following violent protests in the wake of President Trump's election defeat.

Andrei Molodkin, 'The White House Filled With the Blood of U.S. Citizens' (2020) from Ocula on Vimeo.

Andrei Molodkin, The White House Filled With the Blood of U.S. Citizens (2020). Courtesy the artist and a/political.

US nonprofit CulturalDC has decided not to show Andrei Molodkin's The White House Filled With the Blood of U.S. Citizens (2020) on the exterior of its Source Theatre.

'As DC recently experienced a tragically violent weekend of protests, we will not be showing the work at our Source Theatre out of respect and concern for safety,' said Kristi Maiselman, executive director of CulturalDC.

The work was to be projected on the side of the theatre from 1 January 2021. However, Maiselman said CulturalDC is working with London-based arts organisation a/political, with whom the project was developed, to find another venue.

'CulturalDC upholds that free speech is a cornerstone of a thriving cultural landscape and supports artists' right to express their individual opinions through their artistic practice,' Maiselman said. 'We are excited to support a/political and Molodkin in identifying the most impactful place to present the work.'

Born in Russia in 1966, Molodkin now lives in France. He described the United States, where Covid-related deaths now exceed 377,000, as 'a vampire state'.

The human blood he used to flood an acrylic model of the White House in the creation of The White House Filled With the Blood of U.S. Citizens was donated by US citizens in France.

'People came to give their blood for an ideology they can choose rather than giving their blood to a system that kills them,' he explained. 'I never use my blood, my liquid or personality because I was born in a militarist country in a totalitarian regime.'

Molodkin is not averse to controversy. A participant in the Russian pavilion at the 53rd Venice Biennale, he submitted Le Rouge et le Noir (2009), a dynamic sculpture that mixed the blood of a Russian soldier with Chechen oil inside an acrylic replica of Nike, the Greek goddess of victory. The pavilion's curator, Olga Sviblova, removed Molodkin's inscription explaining the origins of the fluids.

'It was when I was in the military that I realised there was no such thing as culture,' Molodkin told Ocula Magazine. 'Soldiers are brainwashed to give their life for the country's foreign policy. Blood and oil were rubles.' —[O] 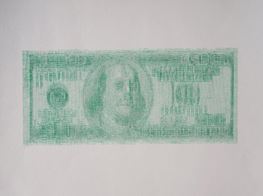 Andrei Molodkin was born in Boui, a town North of Moscow, Russia and started drawing using a simple ballpoint pen when he served in the Russian Army, where he worked delivering crude oil in Siberia. Through his work, Molodkin transforms oil from an

Isamu Noguchi is the first Asian American artist collected by the White House.

Presented by Cahiers d'Art, the cover has been divided into 108 tiles, suggesting the fragmentation of truth.