Beyoncé’s ‘Renaissance’ Has Nothing to Do With Lady Godiva

'Beyoncé Evokes Lady Godiva on New Album Cover' wrote GQ when the image was first revealed on 30 June. Art News, InStyle, Glamour, Numèro, and The Sun all published articles with similar headlines, several of them illustrating their argument with an image of the John Collier painting Godiva (circa 1898).

The cover of Beyoncé's Renaissance (2022) and Collier's painting both depict unclothed women sitting on horses — that much is true. But now that the album is out, it's clear that's where the similarities end.

Lady Godiva was an Anglo-Saxon noblewoman who lived in the 11th century. According to legend, she asked her husband, Leofric, Earl of Mercia, to end oppressive taxes he levied on the people of Coventry. He agreed to do so, but only if Lady Godiva would ride through the streets naked.

Godiva reluctantly called his bluff, issuing a proclamation that all persons should stay indoors and shut their windows during the ride. In Collier's painting, now held at The Herbert Art Gallery & Museum in Coventry, she looks down, her hair gathered to her chest in an attempt to cover up.

'Collier shows Godiva as a real person, a very young woman who seems shy and possibly even ashamed at what she is being forced to do,' Martin Roberts, the Curatorial Manager at the Herbert, told Ocula Magazine.

None of this is very Beyoncé, who sits confidently on her holographic horse, adorned in drip. Her body is turned towards the camera of Dutch photographer Carlijn Jacobs, staring it down without expression. On the album, she sings not only that she's 'comfortable in my skin' but that 'she gon' shake that ass and them pretty tig ol' bitties'.

Roberts said Collier's painting — unusual in that it depicts Godiva sitting astride the horse, and not side-saddle like most other renderings — is the most popular work in the museum's collection. 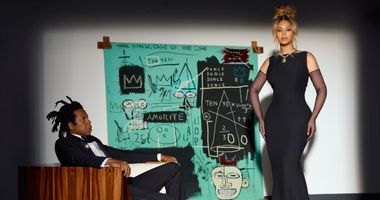 Some argue that in her song 'Break My Soul' Beyoncé is playing a similar role by looking out for the working class. In it, she sings 'they work me so damn hard / Work by nine / Then off past five / And they work my nerves / That's why I cannot sleep at night.'

Beyoncé performs the suffering of wage slaves, but on the very same album she alienates them with lyrics about her 'racks' and 'bands' (bundles of cash), and by namechecking luxury brands Bottega, Balenciaga, Chanel, Dior, Givenchy, Hermès, Louis Vuitton, Prada, Tiffany, and Versace.

As Sarah Rose Sharp wrote for Hyperallergic, the Beyoncé on the album cover 'seems frankly unconcerned about everything, up to and including your taxes.'

A post shared by scene in a dream (@sceneinadream)

A more pertinent visual inspiration for the club-inspired album is this photograph of Bianca Jagger, who rode a horse around Studio 54 for her 30th birthday party in 1977.

'I hope you find joy in this music,' Beyoncé wrote in a statement posted on her website and social media. 'I hope it inspires you to release the wiggle. Ha! And to feel as unique, strong, and sexy as you are.' —[O]