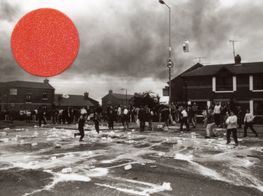 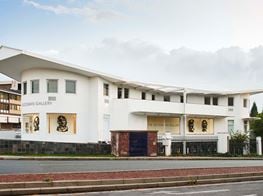 Goodman Gallery issued an obituary for the duo ahead of their first 'posthumous' retrospective.

South Africa's Goodman Gallery has issued an obituary for the partnership of British-South African artist duo Broomberg & Chanarin. Adam Broomberg (b. 1970) and Oliver Chanarin (b. 1971) are still alive but their 23-year artistic partnership was officially terminated Saturday at El Centro d'Art Contemporani Fabra I Coats in Barcelona.

While Broomberg described the split to The Art Newspaper as the 'euthanasia' of a complex but dying relationship, Chanrin said it was 'a house fire that we both urgently needed to escape.'

Describing the 'death', Goodman Gallery said 'the duo have legally, economically, creatively, and conceptually committed suicide.' This theatrical description of the decoupling of a professional collaboration is consistent with the duo's diverse ironic, and satirical gestures that address the use and abuse of power in photography.

For the project 'The Day Nobody Died' (2008), for instance, the pair embedded themselves as war photographers in Afghanistan and asked the British army to pointlessly carry a roll of photographic paper across a dangerous warzone. In tandem with showings of the series 'Shtik' (2014), which sheds light on intrusive three-dimensional-imaging surveillance systems, the artists held knitting circles to make balaclavas, a means of circumventing those systems.

The funerary procession for the pair's extensive collaboration began in London in December last year when a 13-metre long articulated truck, loaded with crates containing the artist's entire archive departed for Barcelona. Their prints, negatives, intimate notes, sketches of unfulfilled projects, and catalogue of books, will be displayed at what Goodman Gallery calls the duo's first 'posthumous retrospective'.

The exhibition, The Late Estate Broomberg & Chanarin, will run from 20 February to May 23 at El Centro d'Art Contemporani Fabra I Coats in Barcelona. In keeping with the funereal tone, the opening of the exhibition coincides not only with Goodman Gallery's obituary but also the reading of Broomberg & Chanarin's 'last will and testament'. Goodman Gallery is slated to take over the artists' joint estate.

Independently, both artists remain active, while retaining their positions as joint professors of photography at Hamburg's Hochschule für bildende Künste (HFBK). Broomberg is working on a book that will be published by London photography publishing house Mack, and a chatbot called adam.baby. Chanarin has been working on a series of Lock-down portraits of his wife, Fiona Jane Burgess, that will feature in an Installation at SFMOMA later this year, and a photographic survey of the UK inspired by German photographer August Sander.

Over the next three months the Broomberg & Chanarin's complete archive will be exhibited a little at a time, overseen by an archivist who will appraise and catalogue the estate in the gallery. The artists, like ghosts loitering at their own wake, will quietly observe the proceedings. —[O]

Adam Broomberg (born 1970, Johannesburg, South Africa) and Oliver Chanarin (born 1971, London, UK) are artists living and working between London and Berlin. They are professors of photography at the Hochschule für bildende Künste (HFBK) in Hamburg