'His presence and influence has never been stronger in the UK than it is right now,' said Lecturer Charles Harris.

Art critics hated Norman Rockwell in his day, calling him out for his bourgeois bromides. Forty years after his death, Lana Del Rey skewered the painter for his sentimentality and naivety, name checking him in her 2018 album Norman Fucking Rockwell!

But Charles Harris came to Rockwell's defence in a talk for the UK Arts Society's Artvent Calendar series this month.

'His presence and influence has never been stronger in the UK than it is right now,' he said.

Best known for his covers for The Saturday Evening Post, Rockwell depicted Christmas as a time of comfort and abundance.

'His concept of Christmas is purely American – idealism and materialism intrinsically locked together,' Harris said.

That might seem at odds with Charles Dickens' darker vision of Christmas, mired in poverty and exploitation, but Harris said Dickens was a major influence.

'What he liked about Dickensian characters was that they were so vividly portrayed by Dickens himself – real people in real situations, and that's what Rockwell did best himself,' Harris said. 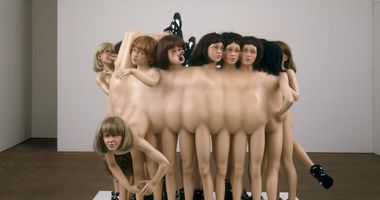 In serious art circles, where criticality and originality are prized, Rockwell's influence persists as a kind of art world grotesque. When Jake & Dinos Chapman needed to come up with something more outrageous than their dioramas of Nazis suffering in hell, they exhibited sentimental landscapes painted by Adolf Hitler and their own saccharine paintings of kittens and flowers. With greater earnestness, perhaps, Jeff Koons made puppy dog vases and outsized flower sculptures.

When it comes to Rockwell, Harris said, 'I can think of no other artist who tried so hard to never offend, and to always delight middle class Americans.'

'He pandered to them and succeeded with them because they loved his work – and largely still do! People want to feel safe, respected and valued – Rockwell gives it to them. You should witness the praise and applause that bursts from my British audiences at the end of a Rockwell Lecture!,' Harris added.

In the contemporary art community, Rockwell's popularity is as often weaponised against him as it is held up in his defence.

But, Harris argued, all artists can benefit from studying his work.

'Anybody who wants to know how to tell or portray a story needs to understand how Rockwell did it in a single image – 4,000 times,' he said. —[O]