The Other Side of Things, Ahn Kyuchul's retrospective exhibition at Kukje Gallery in Busan (13 May–4 July 2021) reflects on three decades of investigating and confronting art's relevance in the world.

Ten of the 36 artworks revisit Ahn's earlier creations from the 1990s. Among these, Five Questions for an Unknown Artist (1991/1996/2021) is an installation consisting of two wooden doors occupying walls either side of a corner: one has 'Leben' written across it—German for life—and lacks a handle, while the other, with 'Kunst' (art), has five. Close to them is a chair planted in a large pot that faces the Kunst door. 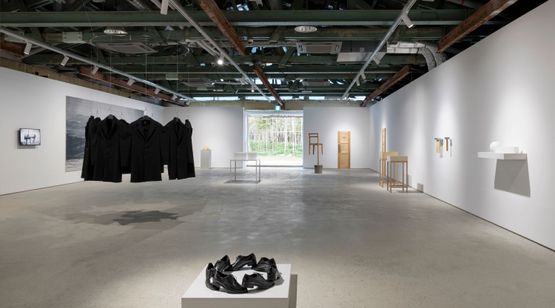 13 May–25 Jul 2021 Ahn KyuchulThe Other Side of Things Kukje Gallery, Busan View Exhibition

The artist originally made Five Questions for an Unknown Artist in 1991 in Germany, where he had then been living for three years. A form of self-portrait, the work expresses his feeling of being stranded between life and art at the time. Feeling directionless, he attempted the impossibility of growing trees by planting wooden chairs to reflect his situation at the time.

Before Ahn moved to Germany, where he studied at the Staatliche Akademie der Bildende Künste Stuttgart, the Seoul-born artist worked with plaster and paper clay to create what are known as his 'narrative sculptures'. These miniature works, often criticising the rampant growth of the capitalist market in South Korea and its subsequent exploitation of labour align Ahn with Minjung Art.

The Minjung Art movement emerged in the early 1980s as artists sought to generate political and social reforms—especially democratisation—through the use of varied media and materials from woodblock printing and murals to collage. Ahn was a member of Reality and Utterance (1980–1990), a Minjung artist group founded by artists and critics Choi Min, Kim Jung-heon, Min Joung-Ki, Noh Wonhee, Oh Yun, and Sung Wang-Kyung, among others.

While living in Germany, Ahn's practice evolved to incorporate ordinary objects, altering or placing them within situations that subverted their assigned roles. The word 'sin', rendered in white in Korean, appears on the black bristles of one of the three brushes in A Guilty Brush II (1990–1991/2021).

The bristles of the two other brushes fade to white, so that the word is lost. The brush, a tool with the authority to clean and erase, becomes the guilty party that needs to work itself to be free of sin.

Not far from the guilty brush, Liebes eins Hammers II and III (1992/2021) suggest an uncomfortable relationship between love and violence. 'LOVE', carved in reverse, occupies the flat end of a metal head in II, while the letters are spread across a row of four anvils in III. The correct orientation of the letters will show only when the hammer is used with considerable force.

Though the ouroboros cycle of repetition seems to run through Ahn's work, the beginning never quite meets its end point. Even if life repeats itself and change is near impossible, the world continues to move forward for better or worse.

Ahn's objects may recall the works of artists from older and contemporary generations such as Jannis Kounellis, who led the Art Povera movement in the late 1960s and employed unconventional, 'poor' materials to challenge the establishment of the art world.

The two artists also converge in their use of living animals. Though not featured at Kukje Gallery, Nine Goldfish (2015) saw Ahn release nine goldfish into a pond divided into nine concentric tracks, while Kounellis arranged for 12 horses to be tied to gallery walls for an untitled installation in 1969.

To search for similarities on the basis of materials, however, would be to conflate their practices. Kounellis, for one, was inspired by the physical reality of his materials and sought to deploy them in ways that did not compromise their integrity, while Ahn's occupation with the object stems from the belief that all objects are activated by human will.

In 1997, Ahn engaged in a public debate with art historian Kim Junghee, who criticised young Korean artists returning from Germany for producing works that closely resembled those of European artists.

Ahn's Solidarity Makes Freedom (1992), a row of three coats connected by their sleeves, came under fire for what Kim perceived as a superficial borrowing from Marcel Duchamp's readymades and Rosemarie Trockel's conjoined sweaters.

Ahn, previously a journalist for the art magazine Gyegan Misul for seven years, refuted Kim's claims, arguing that while there may be external similarities, Solidarity Makes Freedom is a product of different concerns.

The work, he wrote, was in part personal, inspired by memories such as linking arms in public demonstrations, and part of his ongoing exploration of the object. As he told Sisa Journal in 1996, skewing the object's original purpose upsets its relationship to the user, thus generating unexpected narratives.

In The Other Side of Things, these narratives appear stuck in perpetual repetition. An automated broom constantly sweeps the floor in The Yard I Need to Sweep (2021), while the drawing Lingering Time (2021) shows a person who, having climbed up the ladder, is about to release a ball onto a wall-installation of ramps.

The drawing derives from a 2017 installation by the same title, included in Ahn's solo exhibition Words Just for You at Kukje Gallery Seoul (21 February–16 April 2017), in which the ball travels from the top to the bottommost rail, staying there until someone places it on one of the rails above.

Some of Ahn's reworked installations stress this cycle of eternal repetition. Solidarity Makes Freedom II (2021) features nine coats, suspended from the ceiling and arranged in a circle. The number of three conjoined shoes in 2/3 Gesellschaft (1991) increased to seven in 2/3 Gesellschaft II (2021), forming an ouroboros-like circle in which one shoe steps on its neighbour while being trampled by another.

Ahn has spoken of how little the world has changed since the early years of his practice. In an interview with news1 in 2017, he recalled the period of explicit government censorship in the 1980s and the nation-wide scandal in 2016, which revealed that South Korean President Park Geun-Hye's government had, among other things, circulated a blacklist of artists.

Nevertheless, Ahn is far from a pessimist, and he maintains a sense of critical wit. Last year, Seoul's Hakgojae Gallery staged the group show Art and Words 2020 (1–31 July 2020) to celebrate the 40-year anniversary of the founding of Reality and Utterance.

Compartmentalisation as a mode of address comes through, too, in the drawing Blue Velvet Rooms (2021), a drawing of two figures drawing curtains back, one about to enter and the other studying what they can make of the dark interior.

The work draws from an installation titled 64 Rooms (2015) presented in Invisible Land of Love, Ahn's major solo exhibition at Seoul's National Museum of Modern and Contemporary Art (MMCA) (15 September 2015–22 May 2016).

Entering through the outer layer of blue velvet curtains, visitors found 64 rooms, each demarcated by the same velvet curtains, that they had to push through to get out. The claustrophobic journey was fuelled by the expectation that light—an exit—would soon come.

Like Blue Velvet Rooms, movement—and in turn engagement—is central to Blue Velvet Rooms, as it is to Scribe's Room (2021), a 3D-printed model of a room showcased at MMCA that featured a desk and stationery for 1,000 visitors to transcribe a selection of novels.

The transcriptions were later compiled into books and mailed to the participants as part of the larger project, 1,000 Scribes (2015). As the temporary scribe worked, others could observe their progress via video screens, suggesting at once a community that embraces active producers and those who choose to be part of that production, and surveils them, too.

Though the ouroboros cycle of repetition seems to run through Ahn's work, the beginning never quite meets its end point. Even if life repeats itself and change is near impossible, the world continues to move forward for better or worse.

In this sense, Ahn's work challenges straightforward narratives to instill in art a greater sense of purpose. As he wrote in his notes for Words Just for You: 'if life is hard, is it not a shame that art should talk so easily about the world?' —[O] 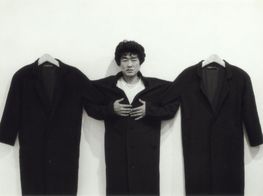 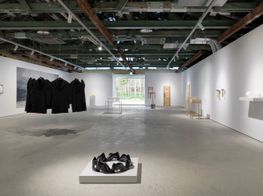 Ahn Kyuchul is a multi-disciplinary Korean contemporary artist known for examining the interrelationships between objects and symbols, as well as humans and the function of art. Early Sculptures Ahn Kyuchul graduated with a BFA in Sculpture from

Exhibition Ahn Kyuchul
The Other Side of Things
Kukje Gallery

Kukje Gallery is pleased to present The Other Side of Things, a solo exhibition of the Korean contemporary artist Ahn Kyuchul on view at Kukje Gallery Busan from May 13 to July 4, 2021. Acclaimed for his complex yet delicate artistic vocabulary 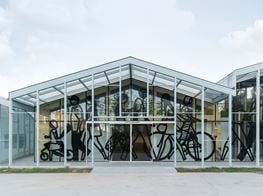 Kukje Gallery launched its first-ever Busan outpost in August 2018. Founded in 1982 and based in Seoul, Kukje Gallery opened its Busan branch in F1963, a cultural complex located in Mangmi-dong, Suyeong-gu, Busan, in order to showcase works by a 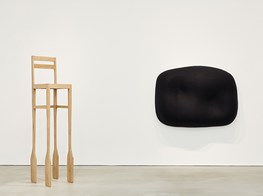 Kukje Gallery’s first exhibition of 2017 showcases work by Ahn Kyuchul in a solo show titled Words Just for You, open from February 21 to March 31. Ahn’s first exhibition at the gallery features a new body of work consisting of discrete