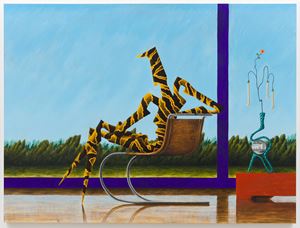 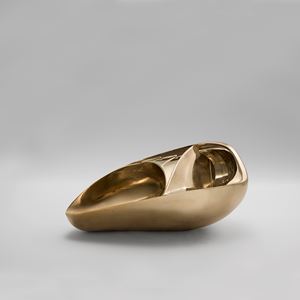 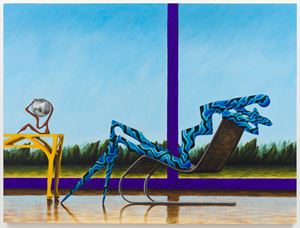 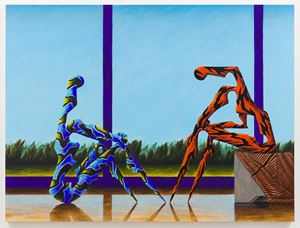 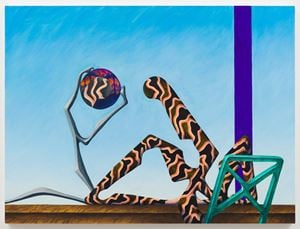 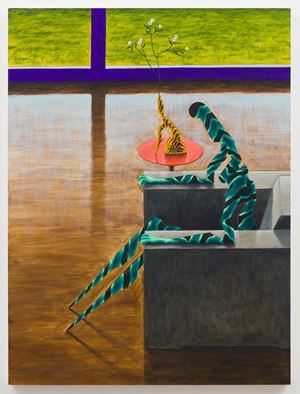 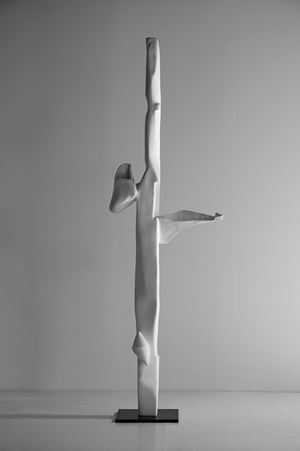 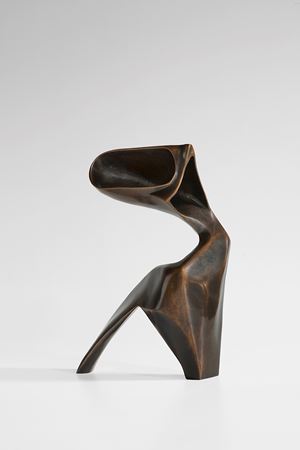 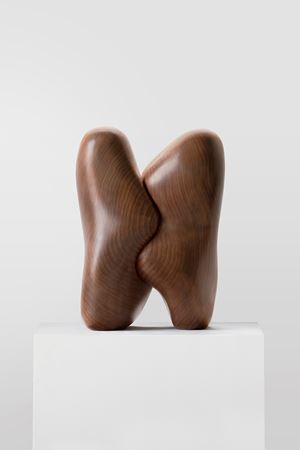 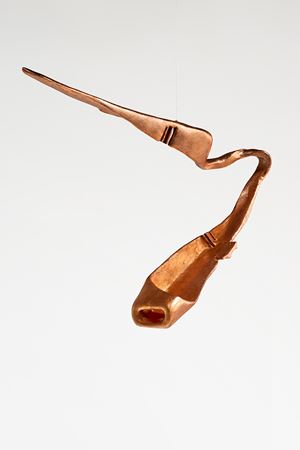 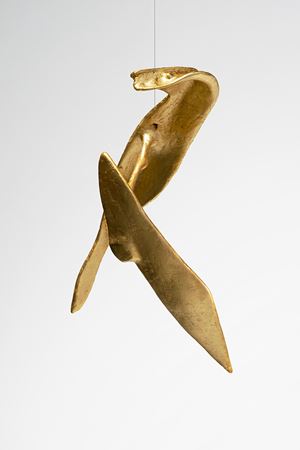 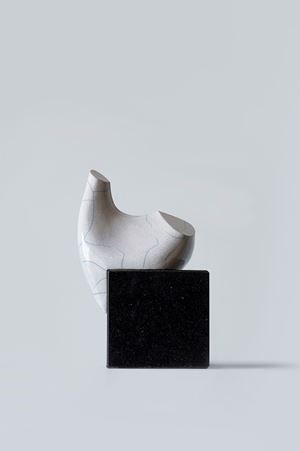 After four months of being closed, Anat Ebgi is thrilled to announce the reopening of the gallery and AE2 to the public with a two-person exhibition, featuring Alejandro Cardenas and An Te Liu. This exhibition will take place at AE2 2680 S La Cienega Blvd from July 11 through September 5, 2020.

An Te Liu, a Toronto-based sculptor, will present a curated grouping of new sculptures alongside a suite of recent paintings by Los Angeles-based painter Alejandro Cardenas. These artists are linked through their search of form through the shared interrogation of design and architecture. In their respective practices, each borrows, transforms, and recontextualises the built and designed world with a sense of humour and playfulness that translates into something simultaneously familiar and mythological.

In Cardenas's newest 'Field House' series, melancholic figures populate a modernist glass country house. One has the sense these figures are trapped inside, gazing longingly at blue skies, only to be enjoyed from a distance. In two works Clear Skies at the Field House 1 and 2, sublimating humanoids repose on Mies Van der Rohe chairs, as uncontested monuments to calm and effortless elegance at the time they were designed they are now cult objects for connoisseurs. Cardenas's works juxtaposes the iconic with the abstract and ineffable.

Liu's work is frequently contextualised in terms of his borrowing forms from consumer objects and packing materials. However, he takes these sources beyond their utilitarian origins to a precarious unknown, imbuing them with a new lyrical narrative. In the case of Talismaic 2000, Liu cast the reflective interior casing of a headlight from his defunct 2000 Honda Civic. Then taking inspiration from Brancusi's The Newborn—a sleek bronze ovoid—Liu modelled the backside of this piece after an egg. With Aspira, Liu dissected a handheld dustbuster, stretching and twisting it open, he finished it with copper leafing. Though the vacuum retained its distinct snout, suspended from the ceiling it is graceful and bird-like, the final form resembles an ancient fossil.

Alejandro Cardenas (b. 1977, Santiago, Chile) completed his BFA at the Cooper Union School of Art in 2000. Cardenas has exhibited his work in solo and group exhibitions including at the Hammer Museum (2003), Anat Ebgi (2019), Harper's Books (2019), and James Fuentes (2008 and 2010). Before becoming a full-time studio painter, Cardenas had a successful career as a multimedia artist, working in illustration, graphic design, and videography. For over a decade, he served as the lead textile designer and art director for the influential fashion label Proenza Schouler. He was also a founding member of Lansing-Dreiden, a New York-based transdisciplinary art collective that produced musical albums, a literary journal, and artworks. Reviews of his art and design projects have appeared in the New York Times, Vogue, and Another Magazine. Cardenas currently lives and works in Los Angeles.

An Te Liu (b. 1967, Tainan, Taiwan) received his Masters in Architecture from Southern California Institute of Architecture in Los Angeles and his BA in Art History University of Toronto. Working predominantly within sculpture and installation, Liu's work has been exhibited in venues including the Witte de With Center for Contemporary Art, the Louisiana Museum of Modern Art, Ursula Blickle Stiftung, the EVA International Biennial of Ireland, the Venice Biennale of Architecture, and the San Francisco Museum of Modern Art. His works are included in the permanent collections of The San Francisco Museum of Modern Art, The Art Institute of Chicago, the National Gallery of Canada and The Art Gallery of Ontario. Liu lives and works in Toronto, Canada.

Sign up to be among the first to know when new exhibitions by Alejandro Cardenas & An Te Liu or at AE2 open.
Sign UpLogin